Lesson Transcript
Instructor: John Williams
Nerve cells, also called neurons, are located in the nervous system where they use electrical messages called action potential to cause actions in other cells. Discover the various functions, types, and structures of nerve cells in this lesson. Updated: 11/22/2021
Create an account

What is the Nervous System?

The nervous system serves as the manager of the body, since it controls the functions of every other system. It communicates with bodily systems in order to coordinate performance and to provide the needs of the body from moment to moment. In order to do this job, the nervous system employs the use of specialized cells, and these cells relay the messages to the necessary tissues, organs, and systems. 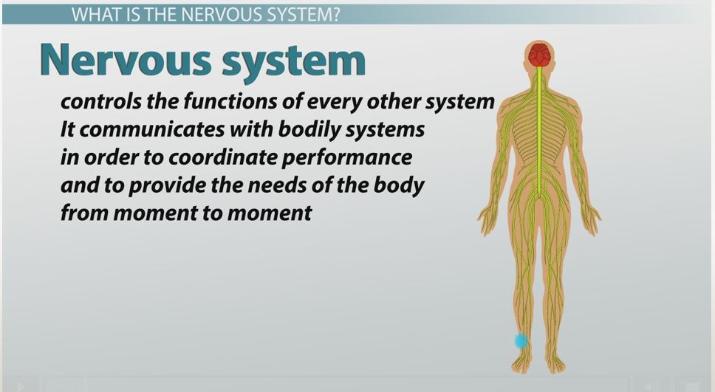 Coming up next: Hormones: Definition, Function & Intro to the Endocrine System

What are Nerve Cells?

Neurons are nerve cells, or cells found in the nervous system. These are specialized cells designed to stimulate other cells in the body in order to communicate. Neurons are excitable, which means they function by using electrical stimulation. Through this electrical message, known as an action potential, neurons are able to initiate action in the cells they target.

Example: Parts of a Multipolar Neuron

For the sake of demonstration, we will discuss the parts of multipolar neurons, since these are the typical example used in discussing nerve cells. It's important to understand that these parts are also found in the other types but are located in different places.

The soma is the cell body of the neuron and is responsible for protein synthesis and the basic cell processes that we associate with a body cell. Unlike other cells in the body, neurons do not undergo cell division, so the soma is typically critical in the health of the cell. Without cell division, nerves cannot produce more nerves, and therefore, when the soma is damaged, nerve tissue is lost.

As we already noted, the soma of a multipolar neuron has dendrites, which receive electrical messages from other cells. These messages are sent by the dendrites to the soma and stimulate a region of the soma known as the axon hillock. The axon hillock generates an electrical message when activated, and this message is delivered by the cell through the axon. The axon is able to depolarize, or become positively charged, and pass this positive charge towards a target cell. This process is known as action potential generation and is essentially the delivery of a message for cell communication.

Once the action potential reaches the end of the axon, then it stimulates the release of neurotransmitters, or chemical messengers. These messengers bind to target cells, and this is the communication step that causes a function to start in the cells that neurons control. As a side note, the speed of this process will be increased if the axon is insulated with myelin, and this aids in the process of relaying an action potential.

Let's review. Nerve cells, also known as neurons, relay messages from the nervous system to coordinate other system activities. There are three classes of neurons: unipolar, afferent, and multipolar. Through an electrical stimulation process called action potential, neurons are able to generate functional responses from target cells, tissues, and organs. For this reason, nerve cells are critical for proper nervous system function and, in the bigger picture, overall bodily functions.

After you have finished, you should be able to:

What is a Neuron? - Definition, Parts & Function

Epididymis Function | Where is the Epididymis Located