This is one area of math where you can relax a little bit. Polynomials, binomials, and quadratics are not tricky things you have to learn. They are names of mathematical expressions that are easy to work with. Knowing what they have in common and how you can identify each of these will help you work through your math problems easier. In this video, we're going to go through what each of them is and how you can identify each.

The first thing I can tell you about all three of these is that they are all polynomials. So, picture a big balloon with all your polynomials floating around inside. Inside the balloon, you will find two smaller balloons with binomials and quadratics inside. Let's talk about polynomials and what makes them unique. 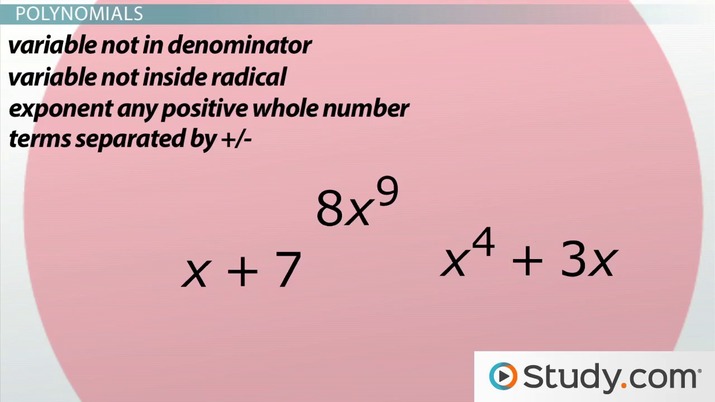 Coming up next: How to Add, Subtract and Multiply Polynomials

Polynomials literally means many terms. They are easy to work with because they have three restrictions. What are the restrictions?

If you see any of these, then you can zap them out of your balloon as they are not polynomials. Even though polynomials literally means many terms, you can have just one term or just two terms. A term means the multiplication of a number with a variable. The variable's exponent can be any positive whole number. All terms are separated by either a plus or a minus symbol. Of course, you can have as many terms as you want in a polynomial. There is no limit. All of these are polynomials that belong inside the balloon.

Notice how none of the variables have negative exponents, are in the denominator, or are inside a radical. All of the exponents for the variables are positive whole numbers. Also notice how all the terms are separated by either a plus or a minus. All of these polynomials are written in what is called standard form, starting with the largest exponent and working my way down. Now let's talk about binomials.

We have another small balloon inside the large balloon and it is for quadratics. Quadratics include polynomials whose highest exponent is 2. We can have quadratics with only one term, two terms, or three terms. But three terms is the maximum limit. We can't have more than that. The one polynomial that we see that fits this criteria is the x^2 + 3x - 1. Other quadratics that we can add to our little balloon includes these.

Do you see how all of these are polynomials whose highest exponent is 2 and that all of these are either one term, two, or three terms in length? They all fit the criteria for quadratics. It is definitely possible that you can have a polynomial that can belong to two or all three balloons.

After watching this lesson, you should be able to compare and contrast polynomials, binomials, and quadratics and understand how to identify each.

What are Polynomials, Binomials, and Quadratics?
Related Study Materials

Ratios and Proportions | How are Ratios Used in Real Life?