Elizabeth teaches counseling classes at the university level, has a private mental health practice and a doctorate degree in counseling psychology.

His heart rate is up and he feels very anxious and scared. But he's not watching a horror movie on TV. This is how Michael feels at least three times a week and he doesn't know why. He often feels ill and uncomfortable at work. So Michael meets with a mental health counselor and is diagnosed with generalized anxiety disorder (GAD), a mental health disorder characterized by intense feelings of fear and/or dread about specific or amorphous things.

During his session with his counselor Michael describes his symptoms. They include:

Michael doesn't experience these symptoms all at once, but he does experience many of them simultaneously during an anxiety attack. 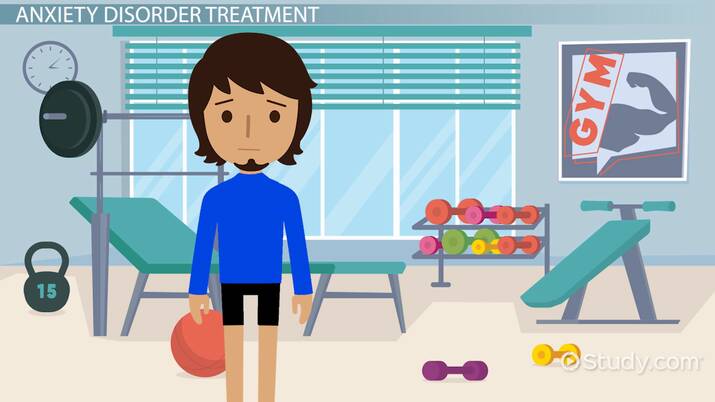 Try it now
Back
Coming up next: Aerophagia: Definition, Symptoms & Causes

Elizabeth is a licensed mental health counselor trained to use the DSM-V, or the fifth edition of the Diagnostic and Statistical Manual of Mental Disorders, to make a mental health diagnosis. The DSM is published by the American Psychiatric Association and is used in the United States and globally as a primary reference to find clinical criteria to diagnose mental health disorders. Michael lets Elizabeth know that he often feels like he's going to have a panic attack, which is a sudden feeling of acute and disabling anxiety. He wants to know if this is also part of his diagnosis. Elizabeth lets Michael know that, since he's only had one panic attack over the last six month, panic is probably not a major somatic symptom, or a heightened perception of a physical symptom.

Michael is glad to hear that panic is not a major part of his disorder. While he has only experienced a panic attack once, he shares that he has experienced the other symptoms of anxiety often over the last six months. However, Dr. Nieves verifies Elizabeth's diagnosis and rules out panic disorder.

Sometimes people with anxiety disorders are prescribed medication to help relieve their symptoms. Dr. Nieves often prescribes Xanax, Ativan, and Klonopin for clients with anxiety disorders, since they're benzodiazepines, which help diminish anxious symptoms. However, he understands that these benzodiazepines are very addictive, so he uses caution when working with new clients.

Elizabeth has a good reputation for using mindfulness techniques, which are essentially techniques designed to help clients reduce symptoms of anxiety by keeping them present. During their second session, Elizabeth teaches Michael how to do a short sitting meditation, a short walking meditation, and techniques used to change negative thoughts into positive thoughts. Michael also starts a new exercise program; he will walk daily and go to the gym to lift weights four times per week.

The exercise will help him reduce stress and lower his anxiety level. When he returns from work or the gym, Michael will meditate for two to five minutes. Elizabeth has taught him how to do a sitting meditation by focusing on his breath. She's also explained how the default mode network (DMN) functions; it's a complex network of interactive regions within the cortex and parietal lobule of the brain that allows us to have multiple thoughts spinning around in our head when our bodies are quiet. For example, when we're strolling from the car to the house or sitting on the couch before we start watching TV, our minds are running. The DMN creates thoughts that spin around in our heads and cause us to become anxious. But when we meditate, it helps to quiet this part of the brain. Michael has noticed that he's able to keep his mind free of thoughts when he's meditating.

Michael also finds the talk therapy he undergoes with Linda to be very helpful. She uses a psychotherapy treatment called cognitive behavioral therapy (CBT), where she helps Michael learn how to change his negative thoughts into positive thoughts.

Because of his exercise and meditation, Michael notices that he's not sweating as much, has fewer periods where he is short of breath, and is not startled when people approach him at work. He still has some difficulty with concentration, but Michael has noticed that his concentration has improved. During his most recent session, Elizabeth asked Michael to keep a diary where he can track the lessening of his symptoms over the next six months. When he returns to Dr. Nieves for a follow up meeting next month, he will also discuss medication management. Since his symptoms continue to interfere with his ability to function at work, Michael may need to take a medication while he continues to use exercise and meditation as a part of his treatment.

All right, let's take a moment to review what we've learned in this lesson. People with anxiety have physical symptoms that cause them to feel ill or uncomfortable in public, which we call somatic symptoms. Anxiety disorders are mental health disorders that can be diagnosed by a licensed mental health counselor using a reference source called the DSM-V, which is the fifth edition of the Diagnostic and Statistical Manual of Mental Disorders.

There are different types of anxiety disorders such as post-traumatic stress disorder or agoraphobia, with the most common being generalized anxiety disorder (GAD), a mental health disorder characterized by intense feelings of fear and/or dread about specific or amorphous things. This is all thanks to what's essentially a faulty default mode network (DMN), which is a complex network of interactive regions within the cortex and parietal lobule of the brain that allows us to have multiple thoughts spinning around in our head when our bodies are quiet.

Some people diagnosed with anxiety disorders take medications prescribed by psychiatrists. Others use a combination of exercise, meditation (which is a common form of mindfulness, or staying present), and cognitive behavioral therapy (CBT), which essentially involves changing negative thoughts into positive thoughts. It may take six months or more for people to start feeling relief after starting treatment.

Affect in Psychology Overview, Types & Examples | What is Affect?

What are Somatic Symptoms of Anxiety?
Related Study Materials

Affect in Psychology Overview, Types & Examples | What is Affect?