Ashli has a Master's Degree in Biology and has taught biology at different grade levels including college, elementary, and middle school.

In this lesson, we will briefly discuss the spinal cord and spinal nerves. We'll learn about what spinal nerves do and where they're located, and see how they connect to each other. Then you can test your knowledge with a short quiz.
Create an account

What Do Spinal Nerves Do?

Did you ever wonder how you know that a bug is crawling up your back? Or how we turn and look at something without seeming to think about it? These simple things happen because we are constantly sending and receiving signals between our bodies and brains through some of the most important nerves we have: the spinal nerves. Spinal nerves work with the spinal cord to relay nerve impulses and act as the reflex center. So when your doctor taps your knee with a rubber hammer and your leg kicks out, your spinal cord and nerves are responsible. Let's take a look at how the spinal cord and the spinal nerves work together and where they are. 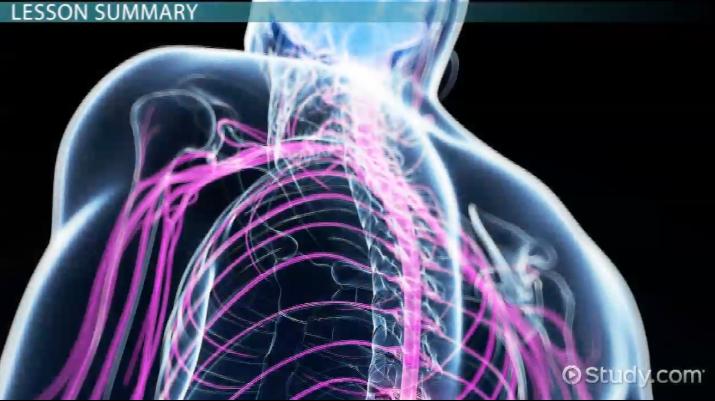 The Five Regions of the Spine

Your spinal nerves come out from the sides of your spine, or backbone. The spine has 33 vertebrae or irregularly shaped bones, and inside these bones is the spinal cord, which the spinal nerves branch out from. Your spine has four curves and is divided into five regions, based on where the curves occur. These regions are the: cervical (neck), thoracic (chest/trunk), lumbar (low back), sacral (pelvis) and the coccygeal (tail bone). Each region of the spine has a specific function and a different number of vertebrae. Let's see how these regions work.

Take a look at the diagram and you'll see the first curve of the spine, which begins at the bottom of the skull. The cervical region has seven vertebrae and is responsible for supporting the head. The next curve starts at the thoracic region, which protects two of your most important organs, the heart and lungs. The 12 thoracic vertebrae have ribs branching off on either side that curve around the front of your body to form a protective cage around your lungs and heart. The next curve starts the lumbar region, which has five vertebrae and is responsible for bearing the weight of the upper body which is why the lumbar vertebrae are the largest vertebrae. The sacral region has five vertebrae that are fused together and the last region, the coccygeal, started out as four tiny bones when you were a child and then fused into a single bone we call the tailbone.

The reason we're going into this detail is that the spinal nerves have the same names as the region of the spine that they come out of and mostly serve the same portions of the body.

The Five Types of Spinal Nerves

Down the center of the spine runs your spinal cord, which can be thought of as a highway with spinal nerves that act as the on and off ramps sending signals from the spinal cord to and from other parts of the body. The spinal nerves are found in between each vertebrae and there are five types of spinal nerves with the same names as the vertebrae where they're found. There are eight pairs of cervical nerves, twelve pairs of thoracic nerves, five pairs of lumbar nerves, five pairs of sacral nerves, and one pair of coccygeal nerves. Commonly, you will see the nerves labeled by a letter, representing the spinal region, and a number representing the specific vertebrae, and this indicates the type of nerve and its location. For example, in the diagram below, C1 indicates the first cervical vertebrae.

Some of the spinal nerves form what are called plexuses or networks of nerves. You can think of the nerve plexus as a busy intersection of two streets. Typically, where two streets meet there is a lot of traffic, and with a nerve plexus there are lots of signals being passed from the nerves to specific parts of the body.

There are four major nerve plexuses in the back. The cervical plexus (which is made up of cervical nerves C1-C5) and the brachial plexus (which is made up of C5 - T1) send signals to and from the head, neck, and shoulders, arms, and hands. The lumbar (L1 - L4) and sacral (L4 - S8) plexuses extend and send signals to the back, abdomen, pelvis, legs, and lower extremities. The thoracic nerves do not form a plexus, but the thoracic nerves do extend along the ribs from the back of the body around to the front.

The spinal cord and spinal nerves are responsible for sending and receiving signals to and from the brain and body. They travel through and out of the spine, which is made up of 33 vertebrae that are divided into five regions: cervical (neck), thoracic (chest/trunk), lumbar (low back), sacral (pelvis), and coccygeal regions. The cervical region helps to support the head and allows for movement and rotation of the skull. The thoracic region helps to protect the heart and lungs. The low back bears the weight of the upper body and has the largest vertebrae. The sacral region has five vertebrae that are fused together and the coccygeal region is made up of four tiny fused vertebrae.

The 31 pairs of spinal nerves are named after the vertebrae that they come out from. There are eight pairs of cervical nerves, twelve pairs of thoracic nerves, five pairs of lumbar nerves, five pairs of sacral nerves and one pair of coccygeal nerves. Some of these nerves band together to form the four major plexuses or networks of nerves. The cervical plexus and brachial plexus send signals to and from the head, neck, shoulders, arms and hands, while the lumbar plexus and sacral plexus send and receive signals to the back, abdomen, legs and lower extremities.

What are the 31 Pairs of Spinal Nerves?
Related Study Materials

Types of Joints & Joint Structures in the Body

Pancreas Gland |Function and Structure of the Pancreas

What is Contracture? | Types, Causes & Treatment

What is a Dermatome? - Definition & Distribution