Literary motifs are defined as objects or ideas that recur throughout a work of literature. Discover important terms such as major theme, minor theme, subject, and thematic statement (and how they relate to motifs), as well as examples of motifs from 'The Great Gatsby' and 'Sense and Sensibility.' Updated: 08/30/2021
Create an account

What Is a Theme?

Powerful and lasting works of art elevate simple, universal subjects - family, romantic relationships, growing up - into something much more nuanced and meaningful. Shakespeare's Romeo and Juliet takes the very broad subject of love and focuses on two young lovers kept apart by family feuds and miscommunication. It's a love story, but the deeper, universal ideas explored are loyalty, family obligations and passion.

Theme is an underlying message in a piece of literature. It is the central idea of a story, sometimes easily summed up in a single word, such as 'love' or 'death.' That doesn't mean that what a literary work has to say about the theme is simple.

Often, a larger, universal theme, like love or war, is explored in-depth in a piece of literature, giving way to smaller, minor themes. For example, we all know the major theme of Romeo and Juliet is romantic love, but within that theme you have the smaller themes of passion, loyalty and family bonds. These themes, both minor and major, are explored through characters (the young lovers Romeo and Juliet, the feuding Capulet and Montague families), through plot (Romeo and Juliet meeting at a party, Juliet's cousin killing Romeo's friend) and through other literary elements. 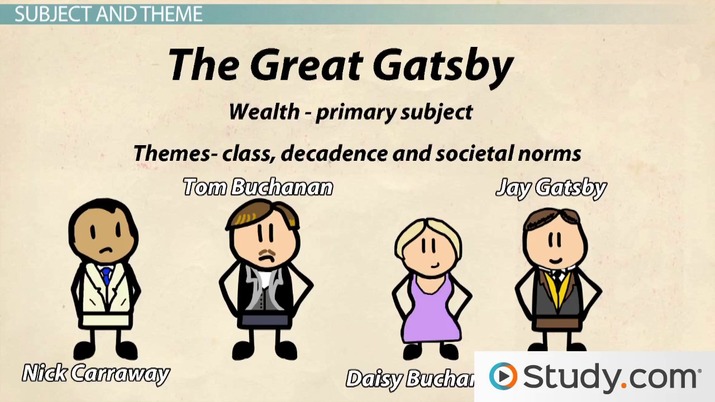 Coming up next: Point of View: First, Second & Third Person

It is important to differentiate between a text's subject and its themes. While several works of literature explore war or love or family as their primary subject, authors often treat the same subject differently. This is where themes come into play, with authors using themes to focus their message. Romeo and Juliet and Jane Austen's Sense and Sensibility both tackle romantic love as their subject, but through plot, characters and other literary conventions, we are given very different messages about love through their themes.

A thematic statement is what the author is trying to say about their subject through their choice of major and minor themes and how writers use those themes to deliver a message. Think about the treatment of the subject of wealth in the novel The Great Gatsby by F. Scott Fitzgerald, which differs from the treatment of wealth in Charles Dickens' Great Expectations and the children's book Lilly's Purple Plastic Purse.

For some characters in The Great Gatsby, wealth is a way for the newly rich, like Jay Gatsby, to enter into society. For others, wealth protects them; think of the old-moneyed Daisy and Tom Buchanan. Wealth is something the narrator, Nick Carraway, stands outside of, as distant and detached to the opulence surrounding him throughout the novel as he is to the unfolding events.

While wealth is a primary subject of The Great Gatsby, Fitzgerald uses the themes of class, decadence and societal norms to shape his thematic statement. Each character in the story, from Jay Gatsby to Nick Carraway, plays their part in revealing what Fitzgerald wants to say about wealth's influence on society. His choice of setting, a wealthy enclave outside of New York City during the Roaring 20s, gives us access to the lavish spending and extravagant lifestyles Fitzgerald looks to critique.

What Is a Motif?

A motif is an object or idea which reoccurs throughout a work of literature. Through their repetition and placement, motifs can contribute to an author's thematic statement. For example, in The Great Gatsby the green light at the end of the Buchanans' dock is mentioned in both Chapter 1 and Chapter 9. Both uses of the green light - an external reminder of Gatsby's longing for Daisy and, later, representative of Nick's uncertain future - contribute to the themes explored in the novel.

Since we've already mentioned that Jane Austen's novel Sense and Sensibility takes on the subject of romantic love, let's explore its motifs and how they contribute to the book's themes. First, let's look at the book's title, Sense and Sensibility, which gives the reader a big hint as to what Austen's thematic approach to romantic love is going to be. Of the two sisters at the heart of the book, Elinor is the practical and logical 'sense' and Marianne is the moody and overdramatic 'sensibility.' 'Sensibility' during the 19th century was more in line with what we would now call 'emotional.' Through the title and personified by the two main characters, Austen lays out her themes of passion and practicality.

Not one for overt symbolism like green lights or caged birds, Austen took a much more subtle approach with her motifs. While passion and practicality as they relate to love are two major themes in the novel, they are explored through motifs like changing weather and what happens when characters take a long walk. For example, it is not a coincidence that in Chapter 9 Marianne and her other sister, Margaret, spend a glorious day walking in the countryside when a rainstorm appears out of nowhere along with the dashing, but no-good, Willoughby.

Later, in Chapter 42, Marianne comes down with a cold from taking long walks in damp, chilly weather pining over, you guessed it, Willoughby. In both cases, Marianne's 'sensibility' leads her to get hurt, both literally and figuratively, by Willoughby. If Austen's ultimate goal is to take a critical look at the conventions of marriage and love as they relate to women during the 19th century, then her motifs are what she uses to get there.

Themes are the major ideas presented in a work of literature, often universal concepts such as love, death and war. Most writers will use their writing to explore both major and minor themes. A subject is a topic explored by an author, but themes are how she or he shapes their thematic statement, or message about the subject they are writing about. Finally, motifs are reoccurring ideas and objects used throughout a work that can contribute to minor and major themes.

What is a Motif in Literature? | Literature Motifs Examples & Types

Motifs in The Great Gatsby

Motifs in Lord of the Flies

Rhetorical Devices in The Great Gatsby

How to Support Your Claims in Writing With Reasoning and Evidence