Tornadoes are dangerous spinning funnel clouds with wind speeds that can reach 300 mph, and they affect millions of people every year. Learn about the definition/causes of tornadoes and how scientists classify tornadoes using the Enhanced Fujita Scale. Updated: 09/24/2021
Create an account

The air gets thick and still. The wind stops. The sky turns green. And then you hear the siren warning you to take cover. If you've ever lived in a place where tornadoes occur, this is a familiar sequence of events. Tornadoes are spinning funnel clouds produced by thunderstorm clouds.

Acting like an arm that reaches down from the thunderstorm cloud, these violent rotating funnels extend from sky to ground. In fact, in order for a funnel cloud to be officially classified as a tornado, it has to be touching both the source cloud and the ground.

Tornadoes are dangerous events. These storms can be several miles wide and have wind speeds as fast as 300 mph! They have indiscriminate and unpredictable travel routes and act like giant vacuum cleaners picking up everything in their paths.

Tornadoes form from thunderstorm clouds, which form when warm, wet air rises very quickly. As it rises, the cool air condenses into a large cumulus cloud. Like adding fuel to a fire, more rising warm air builds the cloud larger and larger. Eventually, the water in the cloud falls back to the ground as rain. As it falls, it brings some of that cooler air back down with it.

The warm air rising is called an updraft (because it's traveling upward), and the cool sinking air is called a downdraft (since it's falling back down to the ground). When these two work together like this, they create a storm cell.

Some thunderstorms stay like this, but some grow even larger and become supercells. But a tornado doesn't begin to form until the air starts to spin. Scientists are not exactly sure how this happens, but it seems that one way this is possible is when winds at different altitudes within the supercell travel at different speeds.

You can try this at home and see how it works. Take a round object, like a ball, and put one hand on each side. Now move both hands forward at the same speed - the ball moves, but it doesn't spin. Now move both hands forward, but have one hand move faster than the other - the ball moves and spins! This is what scientists believe happens in the supercell that creates the spinning funnel cloud. And just like the rain brings down cool air as it heads toward the ground, it also brings down the funnel cloud and turns it into a tornado. 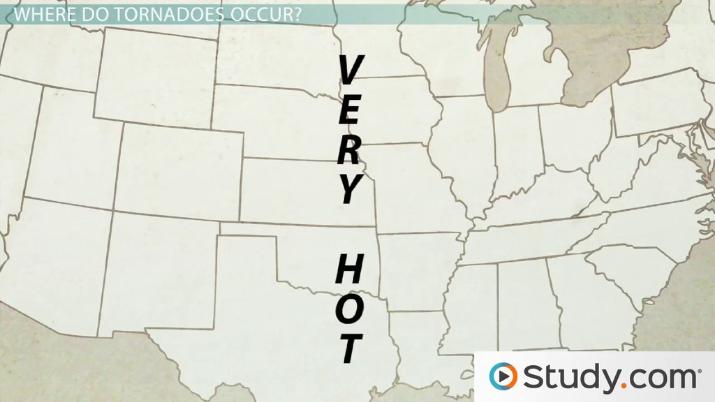 Coming up next: What Are Thunderstorms? - Definition, Types & Formation

Where Do Tornadoes Occur?

Remember Dorothy and her poor dog, Toto? They were ripped from Kansas in a wild tornado and taken far from home. While it's doubtful that you'd actually get taken to Oz if you were caught in a tornado, Kansas is, in fact, well-known for its high frequency of this type of storm. So are other states in the area, such as Texas, Oklahoma, Nebraska, South Dakota, Missouri and Iowa. Collectively, this area is known as Tornado Alley because tornadoes are so frequent, especially in the summer.

Tornado Alley exists because the Great Plains get very hot in the summer. Updrafts are all too common, which as we now know creates thunderstorms and supercells. Florida is also well-known for its frequent tornadoes for this very same reason. Florida has more thunderstorms than any other state in the country, and all that warm, moist air creates the perfect conditions for supercells and tornadoes to form.

Tornadoes are very dangerous to study because if you get too close, they can suck you right up into the funnel, and the chances of you making it out alive are pretty slim. But tornadoes still need to be described and classified, so scientists use the damage on the ground as a measure of the storm's intensity. The Enhanced Fujita Scale is a rating for tornadoes based on the damage surveyed and has been used to classify tornadoes in the U.S. since 2007 and in Canada since 2013. This scale is based on the original Fujita-Pearson Scale, which was developed in 1971 by Tetsuya Fujita and Allen Pearson.

There are six categories in the Enhanced Fujita Scale, EF0 - EF5 ('EF' stands for 'Enhanced Fujita'). EF0 is the least damaging, while an EF5 tornado is something like the 2.5-mile-wide tornado that recently devastated Moore, Oklahoma. The EF scale lists wind speeds in its classifications, but these are really just very good estimates, since, as mentioned before, it's difficult to get accurate data from tornadoes.

Dorothy wasn't thrilled to be in Oz, but she should have been very happy that she made it out of the tornado alive! Tornadoes are dangerous spinning funnel clouds that form from thunderstorm clouds. This cloud extension acts like a giant vacuum cleaner arm, reaching down to the ground and sucking up everything in its path.

Though scientists don't know for sure, they believe that one way a tornado develops is from different wind speeds at different altitudes in the thunderstorm cloud. Like your hands moving a ball faster on one side than the other, the cloud starts to spin, and as rain falls, it pushes the funnel down to the ground. Once it touches ground, it's officially a tornado, ready to wreak havoc anywhere it goes.

Tornadoes develop more often in certain places than others. Areas like Florida and the Great Plains of the U.S. are prime spots for tornadoes because their hot summer air rises quickly and causes large and frequent thunderstorms. The area over the Great Plains is also known as Tornado Alley because so many tornadoes occur here every year.

Though difficult to study, scientists have come up with a way of classifying a tornado based on the damage done by the storm. The Enhanced Fujita Scale classifies tornadoes as EF0 through EF5 (0 being the weakest storm, and 5 being something like the Moore, Oklahoma tornado). The EF scale also includes wind speeds in its classifications, but because we can't actually get inside a tornado to see what's going on, these are really just very good estimates.

When the lesson is done, students should be able to:

What Are Cyclones? - Types, Causes & Effects