Cancer stems from the transformation and mutation of cells. Learn about carcinogens and find examples of carcinogens, and understand the main steps of cancer formation: initiation, promotion, and progression. Updated: 09/27/2021
Create an account

The Transformation of Cells

Campaign managers of all sorts, be it marketing or political, love to initiate, promote, and watch their campaigns progress. It's exciting and it's a thrill to many in those fields. But when the initiation, promotion, and progression have to do with disease, namely cancer, it's anything but exciting or thrilling. It can be devastating. Let's explore how cancer begins in the first place. 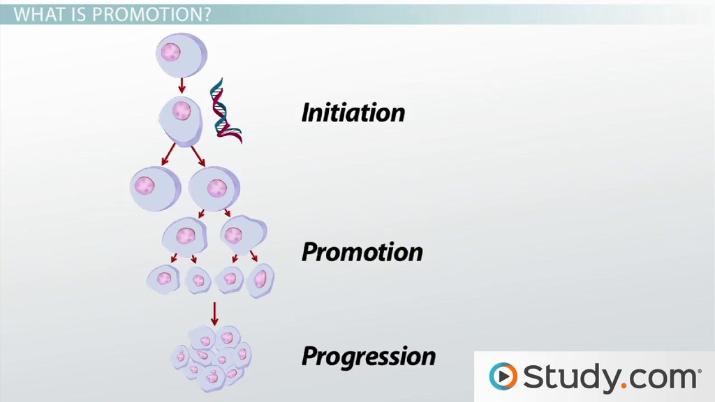 Coming up next: Cancer Syndromes & Genetic Risk Factors for Cancer

A wide variety of carcinogens, or substances that cause the formation of cancer, exist in the world. These include

And so forth down the line.

In a general sense, a carcinogen induces the first step in the formation of cancer, known as initiation. Again, during initiation, something causes irreversible damage to the DNA of a cell. Damaging the DNA of the cell would be like damaging a car's onboard computer system. If that happens, everything goes haywire and the car starts doing all sorts of weird things it's not supposed to do.

The damage to the DNA of the cell must be non-lethal, however! If the DNA is so completely fried that the cell blows up, then it can't reproduce and therefore cannot cause cancer. However, the damage to the DNA must be irreparable; otherwise the cell becomes 'normal' again and therefore would not be predisposed to the formation of cancer. In essence, an initiated cell becomes sort of immortal thanks to a carcinogen messing around with and mutating genes, called proto-oncogenes, into oncogenes, which are the genes that may cause cancer.

What's more is the damage done to the DNA of future cancer cells is and must be heritable - meaning daughter cells must carry this mutation as well in order for the mutation to become fixed or permanent; otherwise the initiated cell is harmless to the body. Just like your father and mother would like to pass on their life lessons or special trinkets to you, so too would potential cancer cells like to pass on bad genes that would help the cancer cells kill you. How nice!

In order for these potentially cancerous daughter cells to be born, at least one division of the initiated cell needs to occur. Therefore, initiation must be followed up with promotion, which is when initiated cells are stimulated to undergo mitosis or proliferation.

Everything from hormones to inflammation can serve as a promoter for initiated cells. Promoters, by themselves, do not damage the DNA of a cell and have no effect on non-initiated cells. Further still, it usually takes numerous exposures to a promoter over a long period of time to induce malignant transformation of a cell. Therefore, promotion is reversible if it is stopped early enough in the process.

Once a population of initiated cells undergoes promotion, they can undergo progression. Progression is the further mutation of altered cell lines that confer malignancy upon that population of cells. Progression may be the result of spontaneous genetic mutations or those caused by things like carcinogens. Once progression is completed, the cancerous cells can invade local tissue, spread around the body, and eventually kill the person they are located in or on.

As you can tell, the things that cause cancer are as many as the steps involved in the formation of cancer, and we've only barely scratched the surface of this process! In fact, the full picture is not fully understood and what we do understand is that it takes quite a bit of work and requires quite a few problems to occur in order to cause cancer. It's not a simple process. But that doesn't mean we can't simplify the important things in this lesson.

Carcinogens are substances that cause the formation of cancer. Carcinogens may induce the first step in the formation of cancer, known as initiation. During initiation, something causes irreversible damage to the DNA of a cell. Initiation is followed up with promotion, which is when initiated cells are stimulated to undergo mitosis or proliferation. Once a population of initiated cells undergoes promotion, they can undergo progression. Progression is the further mutation of altered cell lines that confer malignancy upon that population of cells. This then results in the formation of deadly tumors.

The General Pathophysiology of Cancer

Carcinogen Overview & Examples | What is a Carcinogen?