Lesson Transcript
Instructor: Charles Kinney, Jr.
A cohesive sentence is a complete sentence with a noun or subject and a verb. Explore cohesion, examples of cohesive sentences, and additional cohesive devices such as pronouns, transition words, correlative conjunctions, or conjunctive adverbs. Updated: 12/28/2021
Create an account

Cohesion is a word that we use to describe unity or togetherness. In other words, things that are cohesive fit together. Think about an army. For an army to be effective, it must have cohesion. Good soldiers, a strategic general, and strong communication all mesh to create a united, cohesive organization.

Cohesive sentences are a lot like cohesive armies. They have good soldiers (like a noun and a verb), a strategic general (a writer who carefully places words in all the right spots), and strong communication (sentence and paragraph transitions make sense).

One of the greatest challenges of the English language is writing strong sentences. It takes practice. In this lesson, you'll learn about the components of cohesive sentences so that you can practice cohesive writing. 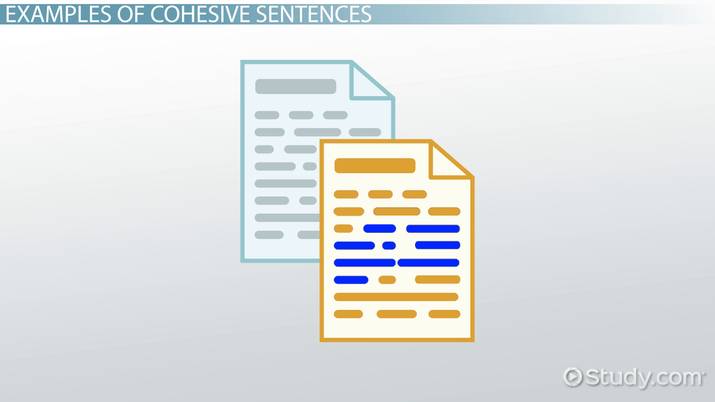 Every cohesive sentence in English must have a noun, or a subject, like a person place or thing, and a verb, or an action. It should be an independent sentence, meaning the sentence is full and complete, not a fragment or a partial sentence. These are the good soldiers.

Let's take a look at an example of a cohesive sentence:

This sentence has a noun, 'I' and a verb, 'am.' It's cohesive, but it's not a great sentence because it doesn't give much information other than the condition of your existence.

Let's keep going and add on more information to our sentence:

Let's take our cohesive sentence and add other sentences:

Now let's look at our sentence and make it cohesive and coherent:

This sentence is part of a quote from Alexander the Great, one of the most celebrated and famous leaders in human history. It's cohesive, coherent, and can stand alone. By repeating the words and the main idea, Alexander said that a weak army with a strong leader is much better than a strong army with a weak leader. While both parts of the sentence could be independent (they have a noun and verb), the parts of the sentences combined make a powerful cohesive sentence.

In addition to being an independent sentence, having cohesion and flowing with the sentences around it, a cohesive sentence can include a cohesive pronoun, transition word, correlative conjunction, and conjunctive adverb usage.

In a cohesive sentence, a pronoun, a word that takes the place of a noun, must agree with the subject. For example:

Someone, the subject, is singular, and therefore the pronoun 'he' must be singular as well. Most people are uncomfortable writing 'he' as it sounds non-inclusive of 'she' and write 'they' instead.

Be careful. There must be parallelism, matching grammatical structures, and the verbs in the sentence must agree with the subjects.

Conjunctive adverbs (and there are many, like moreover, nevertheless, and also) are words that modify and connect verbs in a cohesive sentence. In a way, they function like transition words but modify verbs. They are usually, but not always, introduced by a main clause + semi-colon (;) + conjunctive adverb + comma (,) + main clause.

Create an account
What is a Cohesive Sentence?
Start today. Try it now
English Grammar Rules

What is a Cohesive Sentence?
Related Study Materials

Cohesion Elements, Uses & Examples | What is Cohesion in Writing?

The Purposes of the Ellipsis and Dashes

In-Text Citations Overview & Examples | How to Do Citations

Opinion vs. Fact in a Text | Overview, Differences & Determination

How to Arrange Ideas in a Reading Selection in an Outline

Outline Overview, Function & Examples | How to Write an Outline

Genre in Writing & Reading Examples & Types | What is Genre?