View bio
Investigate a special type of molecule called a compound. Discover what components determine compounds, learn how compounds fit under the umbrella of molecules, and explore common examples of compounds in daily life. Updated: 01/04/2022
Create an account

Chemistry is a really cool field of science, but it involves learning a lot of vocabulary. This can be daunting when you're first starting to explore chemical reactions. For example, you've probably heard of molecules and compounds, but how exactly are they different?

Try re-reading the last paragraph, and see if you can pick up on the difference between the two terms. Got it? Here's the major difference: a compound has two or more DIFFERENT types of elements bonded together. As you know, there are 118 elements on the periodic table. To have a compound, there needs to be at least two of these elements. Let's look at some examples. 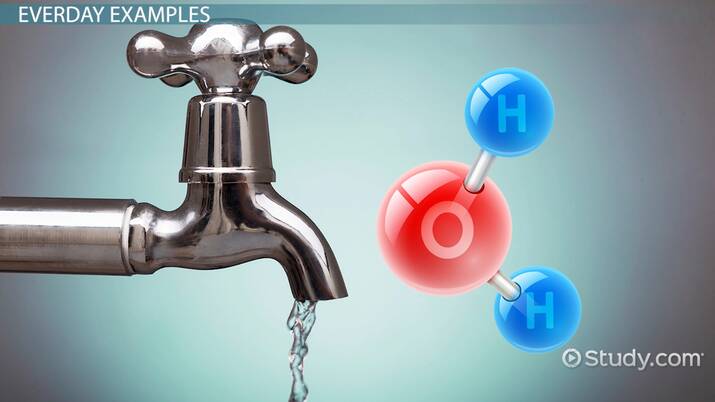 Coming up next: How Compounds and Molecules Are Built From Elements

Believe it or not, compounds are all around us. Simply turn on your faucet and water will come pouring out. Water's chemical formula is H2 O, which means there are two hydrogen atoms bonded to one oxygen atom. So, is water a compound? Let's run down the checklist: Are there two different types of elements in water? Yes! Hydrogen and oxygen. Therefore, water is a compound.

Ready for another one? Alright, look at your kitchen table and find the salt shaker. Table salt's chemical name is sodium chloride and is represented in formula form as NaCl. There is one atom of sodium (Na) chemically bonded to one atom of chloride (Cl). Again, we have two different elements joined together, and thus table salt is considered a compound.

You are doing great. Take a big breath in, and exhale it. Okay, so you just blew a compound out of your mouth! The air that comes out of your mouth when you exhale contains carbon dioxide, and carbon dioxide's chemical formula is CO2 because there is one carbon atom bonded to two oxygen atoms. Because carbon dioxide is made up of two different types of elements, carbon and oxygen, it is considered a compound.

Okay, last example, and it's tricky! When you breathed in, your lungs were filled with oxygen. Oxygen's chemical formula is O2 because one atom of oxygen is bonded to another atom of oxygen. Is this a compound? No, oxygen is not a compound. There are two elements chemically bonded together, but they are the same type of element. Therefore, the oxygen we inhale would be considered a molecule.

This sounds complicated, but let's replace these words with something more familiar and see if it doesn't become clear. All apples are fruit, but not all fruits are apples. This makes sense right? If I showed you a grape and asked 'Is this a fruit?' you'd say 'Yeah,' even though it's not an apple.

Card Game Activity for Practicing with Elements, Compounds, and Molecules:

Steps to the Game:

What Is a Compound? - Lesson for Kids
Related Study Materials

Solubility Overview & Properties | What is Solubility?