A constitution is a system of established doctrine, principles, and laws that serves as the basis for the governance of a nation or organization. Explore written and unwritten constitutions and the role and impact of a constitution on government. Updated: 10/31/2021
Create an account

This balance of rules vs. rights is important for governments, too. After all, we have an agreement with our government - 'You treat us fairly and justly and we won't overthrow you'. This is in fact known as the social contract, and the document that guarantees such rights and responsibilities, as well as the basic laws of a country, is known as a constitution. But, shouldn't we get that in writing? 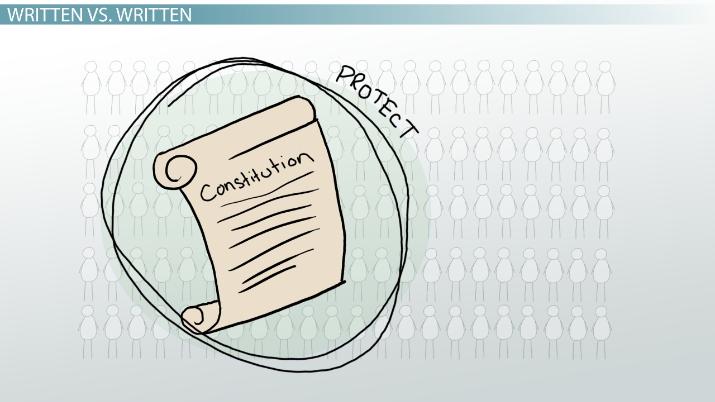 If you're saying that you'd be crazy not to get such an important document in writing, then the vast majority of countries would agree with you. After all, a constitution protects them as well! Yet, some countries are hesitant to call their most basic laws a constitution. This is especially true in the Middle East, where fears of superseding religious teachings would heavily damage the image of governments, from Israel to Saudi Arabia. That said, they call their basic governing document something else, but not a constitution. However, there is one shocking example of a country that doesn't have a written constitution at all, and that's the United Kingdom.

Yes, the island nation that we think of as quaint for still having a monarch and serving tea every day is downright odd for a completely different reason: They don't have a written constitution. To understand why, we have to look at how the British government has transformed over the past 1,000 years. Long story short, as new groups demanded rights, they looked to the past and to the monarchy to see how these rights should be established.

In 1215, it meant that nobles looked to the monarch to gain the rights listed in the Magna Carta. In more recent times, it means that groups look at Parliament, the ultimate source of political power in the U.K., for recognition. In fact, if the whole constitution of the U.K. were to be just one sentence, it would be this: 'Parliament is in charge, but had better hold elections regularly.'

Compare part of that last sentence, 'Parliament rules', to the constitutions of practically every other country, and you'll see that no matter how long or short the document is, it establishes a structure of government. In the United States, many pages are spent explaining the structure of the government that the Constitution permits. In other regimes, it is much shorter, just leaving it up to an established group to show the way. Either way, a constitution is a blueprint to a government on how to run itself.

Yet, it is not enough just to establish a government. Constitutions also establish the rights and responsibilities of the people. Consider the second part of our imagined constitution for the United Kingdom: 'Parliament … had better hold elections regularly'. By saying this, the constitution sets up the right of people to vote, as well as the responsibility for them to do so. You'll often hear people tell those who didn't vote that they have no right to complain about the way things are precisely because they didn't care enough when it was time to vote. Remember that - voting is a right as well as a responsibility!

Other countries lay out the rights and responsibilities of individuals and the government more clearly than just one phrase. In the United States, we have a Bill of Rights, which concerns itself with guaranteeing certain rights for the citizens, as well as responsibilities for the government. These are often referred to as 'Constitutional Rights'. Other constitutions put that order in reverse at times. For example, China has freedom of religion, but it also has freedom from religion - citizens cannot discriminate against those who don't share their religious beliefs, nor may they do any harm to the state or any of its institutions.

Ideally, constitutions should be far-seeing documents, able to govern a nation well into the future. However, if that were the case in the United States, only white men would be able to vote. Clearly, change has to happen. To this end, countries often allow for amendments, or add-on legislation, to be added to their constitutions. The United States has had only 27 amendments passed in more than 200 years, so that gives some indication as to how hard these are to secure. Conversely, some governments make it quite easy to change a constitution - while not a country, the state of Alabama has had hundreds of amendments passed.

Amendments are useful if there's only an issue or two that needs addressing, but what if there is a problem with the constitution as a whole? Again, there are routes available for such sweeping change. In the United States, we can hold a constitutional convention, by which the states agree to open up the whole document or a portion of it for debate.

This has been used to change the U.S. Constitution only once, when the Twenty-First Amendment was passed to repeal the Eighteenth Amendment. However, a number of countries have simply done away with their constitutions and established new governing documents. Often, this is done after a war, such as the German and Japanese constitutions following World War II, but can also be done after social and political unrest, such as the French Constitution of the Fifth Republic.

What is a Constitution? - Role & Impact on Government
Related Study Materials

What Caused the Stock Market Crash of 1929? | Summary, Facts & Factors