The Function of Adjectives

You're probably familiar with the eight parts of speech that make up the English language. Nouns and pronouns are crucial to forming sentences and adjectives modify nouns and pronouns, making it possible to create engaging mental images of what the speaker or writer is talking about by providing more detail.

A complete sentence with only a noun and verb can sound fairly dull. Here's one of these two word sentences:

We have a noun and a verb, but the sentence isn't very memorable. Let's add some other words, including adjectives:

Adjectives serve important functions in spoken and written sentences. This lesson is about the use of descriptive adjectives. 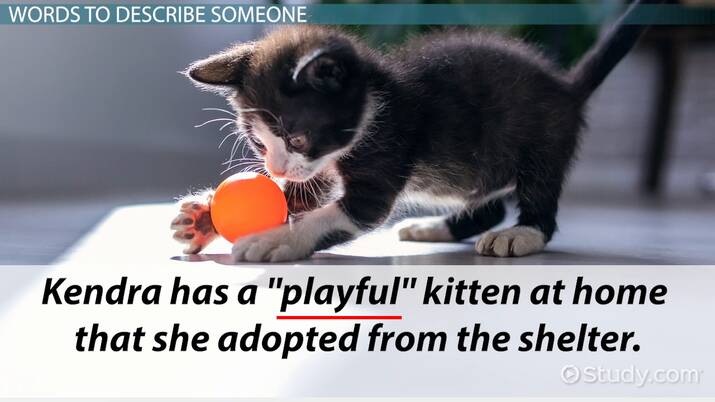 Coming up next: How to Use Comparative & Superlative Adjectives

Adjectives that describe texture include:

Some adjectives to use when describing odor are:

When describing sound, you can use the adjectives:

Adjectives that describe appearance include:

And, finally, some adjectives that describe character are:

Words to Describe Someone

One common use of adjectives is to describe people or animals, further identifying them for the reader or listener. These adjectives might describe size, personality, or general appearance. Here are a few examples:

Now let's create a sentence or two using these adjectives:

Here's a description of the title character from the short story ''Berenice'' by Edgar Allen Poe. Notice the effects of the adjectives he uses:

''The forehead was high, and very pale, and singularly placid; and the once jetty hair fell partially over it, and overshadowed the hollow temples with innumerable ringlest, now of a vivid yellow, and jarring discordantly, in their fantastic character, with the reigning melancholy of the countenance. The eyes were lifeless, and lustreless, and seemingly pupilless, and I shrank involuntarily from their glassy stare to the contemplation of the thin and shrunken lips.''

While descriptive adjectives are necessary for engaging sentences, using too many adjectives grouped together can have negative results. Let's see how this might happen.

A long string of adjectives, as in the following sentence, loses some of the impact of the description:

It might be more effective to break up the adjectives by attaching them to different nouns:

Adjectives are a part of speech used to modify nouns and pronouns, enhancing our speech and writing. There are several types of adjectives, but descriptive adjectives are used extensively to add meaning to a noun or pronoun by describing its qualities, and there are thousands that exist in the English language. Overusing descriptive adjectives can be a problem, but properly incorporating them into a sentence can add significantly to the impact.

What Is a Descriptive Adjective? - Definition & Examples
Related Study Materials

Past Tense Sentences & Examples | What is a Past Tense Verb?

What is an Adverb of Time? - Definition & Examples

Adverbs of Degree: Function, List & Examples | What is an Adverb of Degree?

What is a Predicate Adjective? | Definition & Examples

What Are Compound Adjectives? - Definition & Examples