What Is a Developing Nation?

After World War II, the world saw the birth of many new nations. It also saw the establishment of the United Nations, an institution focused on cooperation among countries. The richest countries began to see it as their responsibility to support new and less industrialized nations. More international organizations were established with the mission of helping richer nations send money and resources to poorer nations to help them grow and modernize.

By the 1960s, many scholars and economists began to use the term developing nation to describe these nations that had a mostly agriculturally based economy, high population growth, and high unemployment. The focus on these developing countries picked up more momentum in the year 2000, when the UN General Assembly adopted the Millennium Declaration. This included a commitment to specific development goals, like cutting in half the proportion of the world's people living on less than $1 a day by 2015.

Then, in 2001, when the planes hit the twin towers in New York, the U.S. and the world began to look at development as a matter of security. Unstable nations with dissatisfied, desperate citizens become a threat to all countries. Identifying and supporting developing nations is an important priority for the United States. 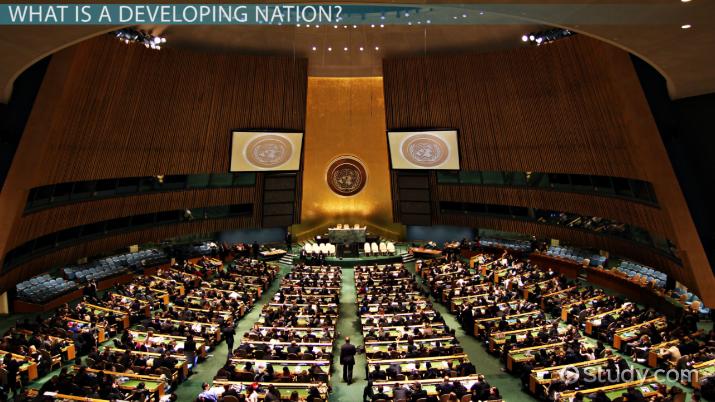 Coming up next: Kibbutz: Definition & Overview

We can think of developing nations as countries where a large portion of the people living there struggle to secure their livelihoods in conditions of great poverty.

When we say developing nation, you might think of nations like Sierra Leone in Africa, or Moldova in Eastern Europe. However, you might not think of China or Russia. In fact, some economically powerful nations like China and Russia can be considered developing nations. The line between developed and developing country can be very blurry. So, how do we decide if a nation is developed or developing? Even the main international organizations, which classify nations as developed or developing, do not have a clear answer!

It's not always clear where to draw the line between developed and developing nations, like in the case of Russia and China. These countries have extremely productive industrial bases but are still classified as developing nations because of other factors. These factors can range from economic status to quality of life. International organizations use different information and standards to make their classifications.

The IMF (International Monetary Fund) and World Bank look primarily at economic statistics for classifying nations. They look at how strong a nation's economy is, how much money the average citizen has, and what sort of industry and resources a nation has.

For example, in 2002, the World Bank looked at the GNI (gross national income) per capita of nations to analyze development. But, even those statistics can vary. For example, the GNI per capita of Ethiopia was $100, while in Malaysia it was $3380, but they are both considered developing nations.

Although economic statistics are very important, they don't tell a complete story. In the 1990s, Amartya Sen, winner of the 1998 Nobel Prize in economics, began arguing that we can't just look at a nation's economy to determine if it's developing. He suggested that development must look at an average citizen's standard of living. We should assess a person's freedom to live and achieve.

The UNDP, United Nations Development Programme, uses a similar approach for looking at development. The UNDP uses the HDI, or human development index, which measures things like political freedom, adult literacy, infant mortality, and life expectancy to classify nations as developed or developing. If a nation has low life expectancy and low adult literacy but high GNI, it could still be considered a developing nation.

Many people have begun to argue that the very word 'developing' is problematic. It suggests that a country is deficient, and that it is striving to be a developed nation in the image of the U.S. However, many citizens of developing nations are worried about becoming like the U.S. They worry that modernization threatens native cultures, and that it doesn't always lead to better economic outcomes and livelihoods for all people.

There is another concern that development is actually an impossible goal. Some economists believe that developing nations will never be able to catch up, because developed nations want to maintain their economic advantages. For example, the U.S. doesn't want to lose its economic superiority to China.

Let's review. A developing nation can be defined and categorized in many different ways, but in general, it is a nation that has a lower economic status or standard of living than 'developed' nations. These developing nations affect our daily lives; in our globalized world, the problems of Nike factory workers in Indonesia can have far reaching consequences in our own country. Global problems like climate change and terrorism will require the cooperation of developed and developing nations. It is important that we learn more about developing nations and how to aid their growth in respectful and meaningful ways.

What is a Developing Nation? - Definition & Characteristics
Related Study Materials

What is Economics? - Definition & Types

Major Drivers of Globalization & Institutions that Shaped the Process