Eddie has an MFA in English from Georgia College where he has taught scriptwriting, English 101, English 102, and World Literature since 2007.

View bio
A dynamic character will grow over the course of their story by learning a lesson, gaining maturity, or seeing any other change in their overall way of thinking. Using examples from literature, learn what makes a dynamic character. Updated: 10/12/2021
Create an account

What Is a Dynamic Character?

A dynamic character is a character who changes throughout the course of a story as a result of the conflicts they encounter on their journey. Some dynamic characters learn a lesson, like Harry Potter did in Harry Potter and the Chamber of Secrets. Some come to a new philosophical understanding of the world, such as Hamlet in the play Hamlet. Others gain maturity, like Prince Hal in the play Henry IV. Some discover flaws in their worldview, such as Sherlock Holmes in 'A Scandal in Bohemia.' Still others discover aspects of their own personality that they didn't know were there, like Neville Longbottom in Harry Potter and the Sorcerer's Stone.

These changes that make a character dynamic are often implied rather than stated outright, so careful analysis is required to discover them. 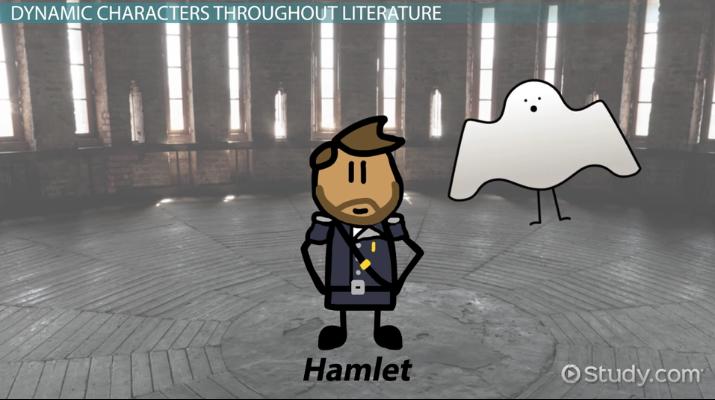 Coming up next: What is a Gist? - Definition & Overview

One of the main conflicts in Harry Potter and the Chamber of Secrets is Harry's inner conflict. He notices that he shares several abilities in common with Tom Riddle - who turns out to be the evil Lord Voldemort - and worries that this means he might turn out to be evil as well. Dumbledore points out that Harry is in Gryffindor House, while Tom Riddle was in Slytherin House.

'It (The Sorting Hat) only put me in Gryffindor,' said Harry in a defeated voice, because I asked not to go in Slytherin.' 'Exactly,' said Dumbledore, beaming once more. 'Which makes you very different from Tom Riddle. It is our choices, Harry, that show what we truly are, far more than our abilities.'

This lesson about the importance of one's choices resolves Harry's inner conflict and makes him a dynamic character.

Sherlock Holmes in 'A Scandal in Bohemia'

Arthur Conan Doyle wrote 4 novels and 56 short stories about Sherlock Holmes, but they are mostly episodic. He solves all kinds of mysteries but rarely changes. However, in 'A Scandal in Bohemia,' the very first Sherlock Holmes short story, Sherlock Holmes does change. He discovers a flaw in his worldview.

At the beginning of the story, Sherlock Holmes does not respect the intellect or cleverness of women. It is implied that he believes in a stereotype of women as unreasonable and overly emotional. At the end of the story, however, Holmes has been outwitted and bested by Irene Adler. The narrator, Dr. Watson, tells us: 'He used to make merry over the cleverness of women, but I have not heard him do it of late.'

This quote shows that Sherlock's view of women has changed, thus making him a dynamic character as well.

Throughout Shakespeare's most famous play, the main character is preoccupied with death. The afterlife is Hamlet's greatest fear, which makes sense considering that his father came out of purgatory and told him of the horrors that await. Because the afterlife is Hamlet's greatest fear, it follows that he is afraid to die. He tells the audience that he would gladly kill himself if it weren't for 'what dreams may come when we have shuffled off this mortal coil.' Because of his fear of death and the afterlife, Hamlet is unable to act out his revenge on Claudius.

But when Hamlet visits the graveyard and holds the dead skull of someone he knew, he realizes that death is inevitable. Even great men like Julius Caesar and Alexander the Great could not escape it. He tells Horatio that 'There's a special providence in the fall of a sparrow. If it be now, 'tis not to come. If it be not to come, it will be now. If it be not now, yet it will come - the readiness is all.' This philosophical change in Hamlet's view of death allows him to finally carry out his revenge on Claudius.

Shakespeare wrote three plays about Prince Hal, and he is a dynamic character in all of them. His change from the beginning of the first play, to end of the last play, is astonishing. At the beginning of Henry IV Part One, Young Prince Hal is the prodigal son of Henry IV. He spends his time drinking in a tavern and hanging out with unsavory barflies.

At the end of Henry IV Part Two, Hal has matured. When he becomes king (Henry V), he thanks the chief justice who tossed him in jail for his behavior. He banishes his most unsavory friend, Falstaff, telling him 'I have turned away my former self.' That in itself shows the tremendous growth of Hal. At the end of the play Henry V, this once wasteful party animal is described by the chorus in the most glowing terms possible:

'Small time, but in that small most greatly lived

This star of England: Fortune made his sword;

By which the world's best garden be achieved.'

Neville Longbottom in Harry Potter and the Sorcerer's Stone

A character does not have to be the protagonist in order to be dynamic. Many great works have several dynamic characters. In Harry Potter and the Sorcerer's Stone, the minor character Neville Longbottom is dynamic. He discovers a part of himself that he didn't know existed. Neville seems weak, cowardly, and incompetent throughout the story. At the end, however, he stands up to Harry, Ron, and Hermione and is praised by Dumbledore who says, 'It takes a great deal of courage to stand up to your enemies, but a great deal more to stand up to your friends.'

The action Neville took in standing up to his friends is an action that surprised not just those he stood up to, but himself as well.

A dynamic character is changed by the conflicts endured throughout the course of the story. Harry Potter, Sherlock Holmes, Hamlet, Prince Hal, and Neville Longbottom are just a few examples of dynamic characters.

Throughout the course of a story, a dynamic character can experience a change. Whether it is because of a lesson learned, a philosophical understanding, the discovery of an internal flaw, or a realization of their maturity, a dynamic character will change from the beginning to the end of the story.

You could experience learning outcomes that include the ability to define 'dynamic character' and cite several examples of such from different stories.

In this exercise, you are going to use the lesson to identify dynamic characters from stories of your choice. You will then analyze just how the characters have changed.

Choose one of your favorite stories. It can be either a book, a movie, TV show, or comic. Pick one character (they can be either the protagonist or a minor character).

Next, answer these questions:

For example, if you were to select Severus Snape from the Harry Potter series, your answers might look like this:

Next, choose a second story you enjoy (again, it could be either a book, movie, or TV show). Pick two characters from this one story to analyze. Answer the same questions for each character. Next, you will compare these characters' arcs.

If you were to select Lord of the Rings and the brother characters Faramir and Boromir, your answers might look like this:

What is a Dynamic Character? - Definition & Examples
Related Study Materials

An Ounce of Cure by Alice Munro: Summary & Analysis