Raymond has earned a bachelor's degree in computer information systems and a master's degree in organizational leadership.

View bio
A hacker is someone who illegally gains access to a system through the use of computer or technical skills. Learn about the definition of a hacker and explore an overview of the three types of hackers--black hat, white hat, and grey hat. Updated: 10/03/2021
Create an account

What Is a Hacker, Really?

The basic definition of a hacker is someone who uses a computer system to gain unauthorized access to another system for data or who makes another system unavailable. These hackers will use their skills for a specific goal, such as stealing money, gaining fame by bringing down a computer system, or making a network unavailable -- even sometimes destroying them. However, there are three different types of hackers, each with a particular goal, and not all are the bad guys. 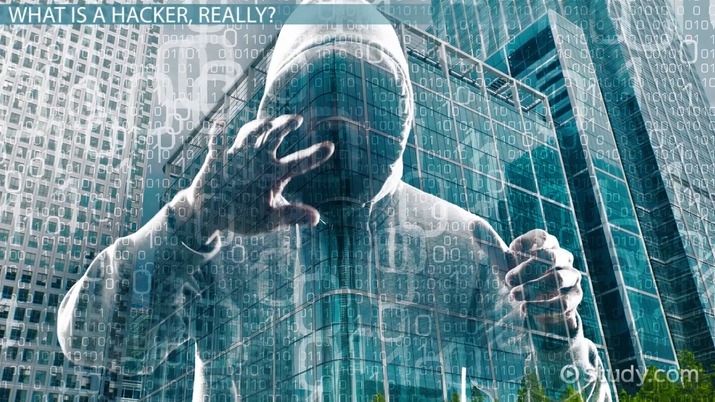 Coming up next: What is Communication Protocol? - TCP/IP & Explanation

The three types of hackers are the white hat hacker, the grey hat hacker, and the black hat hacker. Each type of hacker hacks for a different reason, a cause, or both. All have the required skills needed to accomplish their mission. At one end of the spectrum is the black hat, who hacks for evil and malicious intent and without permission. On the other end of the spectrum is the white hat, who hacks against a black hat in order to protect computer and network access and has the company's permission to do so. In the middle is the grey hat, who hacks not for evil and not for good; they are neutral in their cause and usually try to sell their skills for monetary gain, like a mercenary.

The black hat hacker is the one who hacks for malicious intent - he is the bad guy. This type of hacker uses his or her skills to steal money or data, knock a computer system offline, or even destroy them. Some of these hackers love to see their work and name in the news, so they would try to target big name organizations and companies. For instance, they might change the front page of a company website.

Black hats also try to break into computer systems to steal credit card information and possibly steal valuable information to sell on the black market. They may even lock out the computer and network system from the owners and then hold them for ransom.

The black hat works outside of the law. This is the hacker that we as a society are most familiar with. Some black hats have cost companies hundreds of millions of dollars in damages for credit card and social security information theft. They can work alone, in that case known as a lone wolf, or with a team. They work slowly and methodically, since the black hat knows it takes patience to compromise a computer or a network system in order to a hit a big payoff and not be caught.

Have you heard of the hacker group called Anonymous or LulzSec? These are black hat hackers whose goals are more driven for a cause rather than monetary gain are known as hactivists. In 2014, following the Michael Brown shooting in the city of Ferguson, Missouri, a group associated with Anonymous said that they will bring down the city and police servers if protestors were harmed in any way.

The white hat hacker is one who is an ethical hacker. This type of hacker usually hacks for a company or organization for defensive purposes. The white hat is given special permission with limits on what the hacker can and cannot do on their customer's computer and network systems. This special permission is usually given in a legal document signed by both the white hat and the company, which keeps both parties out of legal trouble.

It is very important that the white hat does not do anything outside of what is stipulated within the contract. If so, the white hat may find themselves in very hot water, possibly looking at prison time. With the signed agreement, the white hat will probe the computer and network defense and record all the vulnerabilities discovered, then give a final report that is given to the company.

The white hat hacker uses many different avenues to compromise their customer's network and computer system; however, the aim is to give a detailed report to the customer (the business or organization) on where there are 'holes' in their client's computer and network system defense. The goal is to allow the company to fix their vulnerabilities so they are less vulnerable to the black hat hacker.

Some grey hats hack for the money while others do not. Other grey hats will hack for a cause and justify it for a logical reason. Most grey hats try to use their skills to become independent security consultants. For example, a grey hat may break into a bank's financial system and then inform the bank of what vulnerabilities were exploited. It is possible that the bank may pay the grey hat for their effort because they did find a vulnerability or even offer the grey hat a job; however, it is possible the bank may call the police to have the grey hat arrested for breaking into the bank system without the company's approval. So it is a thin line to walk for the grey hat. The difference between the grey and white hat is having legal permission and authorization.

So now we know that the term hacker has three different meanings, each with their own goals and aspirations. We know the black hat hacker works outside of the justice system, hacks for fame, money, and possibly the destruction of others' computer and network systems. We know that the white hat hacker is one who hacks for defensive purposes, making a company or organization more resilient to black hat attacks - with permission. Finally, we understand now that the grey hat hacker sits on the fence and hacks for some legitimate purpose but is not given permission to do so.

You are a well-respected black hat hacker. One night, as you felt bored earning loads of cash from stolen credit card information, you felt the urge to hack and spy on your neighbor's activity by hacking his cloud storage. Since your neighbor recently transferred into your small town, you thought of checking him out. A couple of minutes went by and you somehow managed to gain access to his cloud. As you browsed through his files, you clicked on a folder entitled "Neighbors" and you found out that he had photos of you and all of your other neighbors in his cloud. The most recent photo that he had was you sitting on your computer minutes ago. How would you respond on this invasion of privacy given that you are a hacker yourself? Will you report him to the police?

As what you've learned, internet hacking is a crime that is punishable by law. Are the laws regarding hacking in the place that you reside strict? What could be the possible punishments that a hacker might face when convicted?

Suppose you work as an IT specialist at a construction firm. While being bored at work, you opened your computer and watched the film "Snowden". It was about the real-life American whistleblower Edward Snowden who copied and leaked highly classified information from the National Security Agency. From the film, the leaked data revealed the extent of the global surveillance programmes run by American and British spy agencies. And because of what he did, he was charged with espionage and has since sought refuge in Russia. From this information, how will you classify Snowden as a hacker? Is he a black hat, a grey hat, or a white hat hacker? List the reasons that led you to classify him that way.

What is a Hacker? - Definition & Overview
Related Study Materials

Spyware Types & Examples | What is Spyware?

What Is a Backdoor Virus? - Definition, Removal & Example

Denial of Service Attack Types & Examples | What is DOS Attack?

What is a Worm Virus? - Definition, Examples & Removal Tools