The hemiacetal is part of what makes sugar sweet. In this lesson, we'll learn about the structure of the hemiacetal and how to identify the hemiacetal. We'll also learn how it's formed. Updated: 10/29/2020
Create an account

We all love eating a piece of candy or a cake, but what makes it taste so sweet? The sugar in these products have OH groups oriented in the perfect way to interact with receptors on our tongue, which creates the sweet taste that we love so much!

Part of the orientation of these OH groups is a hemiacetal. In fact, the sugar glucose may be the most commonly known hemiacetal. A hemiacetal is a carbon connected to two oxygen atoms, where one oxygen is an alcohol (OH) and the other is an ether (OR).

Remember that ''R'' is short hand to denote any carbon chain. The carbon chain can be hundreds of carbon atoms long or as short as one carbon atom. This carbon chain could also only have hydrogen atoms attached, or it could have other functional groups such as alcohols. 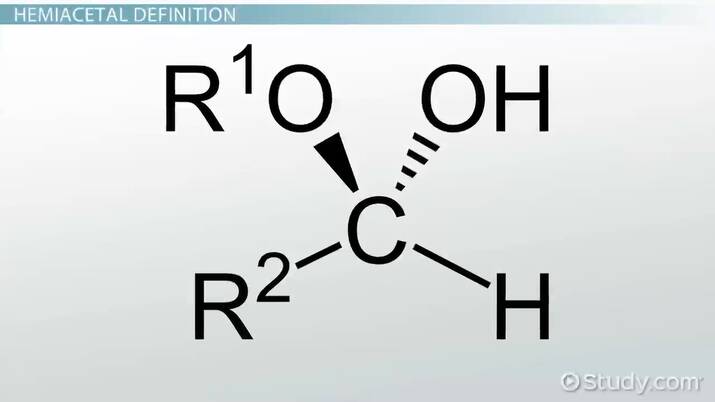 Coming up next: Formation of Cyclic Acetals

The simplest hemiacetal is 1-methoxyethan-1-ol. In this case each ''R'' group is a methane, a CH3.

In this image the alcohol, R group, and ether are circled in red. The entire hemiacetal is circled in blue.

A hemiacetal forms when an aldehyde reacts with an alcohol. There are two different ways this can occur, as a neutral reaction or catalyzed with an acid.

The extra proton (hydrogen) on the ether can then transfer over to the oxygen forming the hemiacetal. The reaction occurs slowly because instead of transferring the hydrogen from the ether to the oxygen, the extra electrons on the oxygen could simply go back onto the carbon, kicking off the ether, and we end up with our original reactants.

This reaction can and does go backwards frequently, making it happen very slowly.

The alcohol can quickly react with the carbon. Once those electrons are pushed onto the oxygen it no longer has the positive charge. But the ether still has a positive charge. So now, the conjugate base from the previous acid can remove that hydrogen and the hemiacetal is formed.

In the case of glucose forming a hemiacetal, the alcohol and the aldehyde are on the same molecule. Therefore, it's an intra-molecule reaction, where a molecule reacts with itself. Almost all glucose is in the cyclic form; it is seldom in the straight chain. This shows us how easily this reaction occurs.

Let's look at the glucose structure. We can see that on one end of the molecule is an aldehyde and every other carbon has an alcohol attached. Technically the aldehyde could react with any of those alcohols to form a hemiacetal, but it would make an awkwardly shaped ring with a lot of internal strain.

The best shaped ring is the six-membered ring. So the alcohol on carbon 5 reacts to form the hemiacetal.

The same reaction occurs as when the alcohol and the aldehyde are two separate compounds. The alcohol attacks the carbon in the aldehyde. Then we have a circle with an oxygen as one of the members of the circle. This oxygen has an extra hydrogen, giving it a positive charge. The aldehyde (which is now an alcohol) has a negative charge. There is a proton transfer, and we end up with the hemiacetal.

One of the most commonly known hemiacetals is sugar molecules such as glucose. For example, an intra-molecular reaction occurs when the linear glucose molecule becomes a cyclic glucose molecule. The alcohol on carbon 5 reacts to form the hemiacetal.

What Is a Hemiacetal? - Formation & Definition
Related Study Materials

What is an Epimer? - Definition in Chemistry & Examples