View bio
In the management context, a leader is defined as someone who performs managerial roles in an organization, such as decision making and implementing plans. Learn about the components of the leader managerial role and other management roles that Henry Mintzberg defines. Updated: 08/18/2021
Create an account

The Leader in Context

Legendary computer scientist Rear Admiral Grace Murray Hopper - sometimes called 'Amazing Grace' Hopper - once said, 'You manage things; you lead people. We went overboard on management and forgot about leadership.' Would organizational expert Henry Mintzberg agree? Mintzberg identified ten roles relevant for every manager based on observational research from the CEO level to the first-time supervisor. A particular manager may only slip into each role for less than ten minutes a day, but tasks and responsibilities of the leader role are central to a manager's success. Let's look deeper into Mintzberg's theory to see what he has to say about leaders. 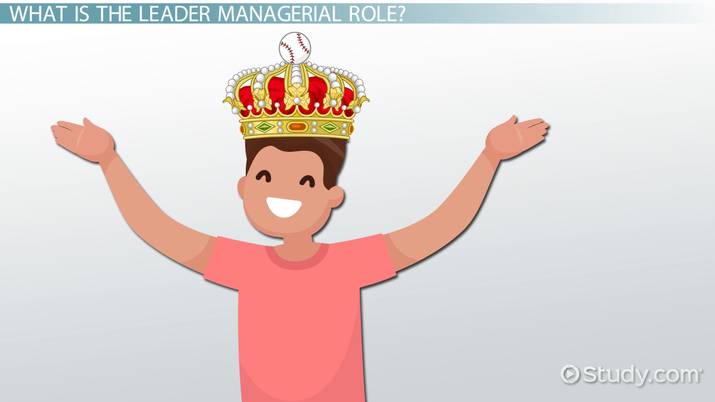 Try it now
Back
Coming up next: Army Leadership: Attributes, Philosophy & Principles

What is the Leader Managerial Role?

Meet Harry and Larry, our twin managers. Both bought similar territories in the sports equipment consignment franchise, Not That Smelly. Both have the same number of stores and the same inventory, as well as similar customer and employee demographics. Let's see how Harry and Larry each take on Mintzberg's leader managerial role.

When Linda was hired to manage a new store, Larry provided her with clear and consistent training. Larry had a manager from another store come to train Linda for the month. He met with Linda to address questions or areas in which the two stores differed. They referred often to this year's updated employee handbook. He expects Linda to make mistakes as she takes over the store on her own, but he's looking for her to learn and make different mistakes in the future. If she doesn't occasionally fail, she isn't taking the kind of risks necessary for innovation and profit.

When Harry hired Hannah, the store manager had just quit and Harry was stuck running it at the same time as he was trying to open a new one. Hannah was the first person he interviewed, and after half an hour of describing how he grew the territory from scratch, he offered her a job on the spot. Harry expects all his employees to pick it up as they go; he doesn't have time to provide organized training. Failure is the result of incompetence and stupidity. Employees are quick to blame each other when something doesn't go well, and they're equally quick to grab credit when it does.

Larry has a clear vision for the growth of his territory over the next year, and he shares this regularly with employees. Each quarter, he sits down with every team member to identify SMART goals. SMART stands for specific, measurable, achievable, realistic, and time-bound.

Harry thinks hockey equipment probably has higher margins (makes more money per item), because his kids play and he knows first-hand how expensive equipment is.

Larry can see that Linda is working hard, but he's noticing that two junior employees have started arriving late fairly often. During their regular meeting, he asks Linda a series of questions about how she's holding them accountable and offers some suggestions. He talks her through different approaches. Linda confidently leaves knowing that she'll be able to manage a potentially uncomfortable confrontation. When Linda and Larry meet again, she's able to report that the two employees haven't been tardy since she spoke with them. Larry makes a note to keep tabs and writes a quick positive report for Linda's file.

Harry hasn't been able to meet with Hannah for two months. He remembers he wanted to figure out if the hockey items are the most profitable on re-sale. He surprises Hannah on her shift and asks for her inventory sheet, which she is quite proud of because she developed it herself. He scans the sheet and doesn't find it categorized by sport, as he wanted, but by equipment type. As a result, hockey shoulder pads and football shoulder pads are lumped together, as are hockey skates and figure skates. Harry can't tell if hockey is more profitable than other sports. He crumples up the report and tosses it in the wastebasket, telling her to email a manager from another store to get a better inventory sheet.

Larry schedules a performance review with Linda. Before they meet, he reviews the notes in his file from their regular meetings and looks at the quarterly goals. He asks Linda to do the same. He also schedules meetings individually with the other employees to get their perspectives on working with Linda. He and Linda meet, compare notes, and talk about the ways in which she exceeded, hit, or missed targets. Linda is not surprised by anything she hears in this review. Larry also takes this as an opportunity to get feedback from Linda on how he's doing, and Linda identifies two ways in which he could communicate more clearly with the team.

Harry does an Internet search for a performance evaluation checklist. He calls Hannah to arrange their first scheduled meeting since she started working there. Hannah doesn't say much while Harry reminds her of all the mistakes she's made since her first day. He tells her he expects her to 'shape up or ship out.' She's shocked. She knew that he was angry about the inventory, although she wasn't sure why, but she thought she'd been doing well because the store's revenue was up.

Larry wants employees who are intrinsically motivated. He pays a bit more than the nearest competitor, so his team feels valued and doesn't think about jumping ship every time something goes awry. Each year, he has a friendly competition between stores based on beating goals by the largest percentage. When any store overshoots the target goals, the additional profit is put into an education fund. Any employee below the manager can apply for a scholarship, selected blindly by the group of community members. He talks to employees often about what they like about their work and arranges - as much as possible - for them to do more of what they enjoy most. When they have to do the less pleasant tasks, they don't mind as much, because it's something that needs to get done in order for everyone to do well. Sometimes, Larry will pitch in with the trash when he's on site. Larry has a very low employee turn-over rate.

Harry wants to be the source of inspiration, so he's okay with external motivators like praise, criticism, cash rewards, and punishments. His employees work hard to stay in his good graces; he's very generous with his praise when you're on his good side. It's important to keep track, because today's favorite might be tomorrow's scapegoat. His contests are between employees in the same store: the winner receives a cash prize and the losers have to take out the trash or clean the toilet for a month. He has no intention of undermining his authority with work that's beneath him. Between people who get fired and people who quit, there's a high turn-over rate. He sees this as a sign of laziness and lack of loyalty, and it's the reason he pays employees exactly market rate and not a penny more. Well, not a penny more unless you're a good negotiator. Harry favors those who are more assertive, so, sometimes, a newcomer with less experience makes more than a seasoned employee. Compensation is a big source of gossip in Harry's stores.

Of course, Larry and Harry are examples of only two ways managers could take on the leader role; there are truckloads of models for how a leader could succeed. Do you think Mintzberg might agree with 'Amazing Grace' Hopper that, even though Larry and Harry are both managers, one of them may have gone overboard on management and forgot to be a leader?

Let's take a few moments to review what we've learned. First, let's look at what you should be able to do after viewing this lesson:

Mintzberg's roles that we looked at included the following:

Prompts About Leaders in a Managerial Context:

Create a PowerPoint presentation that details the five main activities of leaders in managerial roles.

Example: Training is the first step, and new managers should be expected to make mistakes and learn from them.

Example: Harry's goals for Not That Smelly were vague, while Larry's goals were SMART. Larry also made sure each employee knew what the specific goals were.

Choosing one of the five activities of leaders in managerial roles, write a reflection essay of approximately three to four paragraphs about how you would approach that activity if you were in the leader managerial role. What would you do to make the outcome successful for your employees and company?

Example: If leading a company engineering cutting-edge medical technology, you would motivate your team members by communicating with them a lot to find out the types of things they enjoy most about their jobs.

The Stages of Team Development

Manager Overview, Goals & Responsibilities | Who is a Manager?

Understanding Debits and Credits in Accounting

What is a Leader? - Definition, Qualities & Characteristics
Related Study Materials

The Stages of Team Development

Manager Overview, Goals & Responsibilities | Who is a Manager?

Understanding Debits and Credits in Accounting