The marginal tax rate is the amount a taxpayer pays for every additional dollar in their income. Study the definition of the marginal tax rate, how it started to be imposed, and how it's computed. Updated: 10/15/2021
Create an account

Using tax brackets is a popular method of determining tax rates because most governments, and most people, believe that it isn't fair to expect all citizens to pay the same percentage of their income in taxes. If the flat rate was 10%, someone that made $10 million would pay $1 million in taxes, while someone that made $10,000 a year would pay $1,000. That $1,000 is a lot more important to the person making $10,000 than the $1 million is to the person making $10 million. 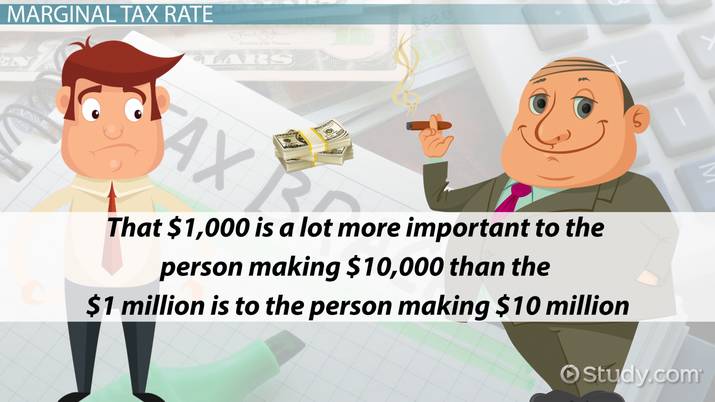 Coming up next: What is a Mortgage? - Definition & Purpose

After the Civil War, the personal income tax was dropped, at least until 1894. Taxes were still inconsistent after that and depended mostly on what the government expected to spend in the coming year. The big change in U.S. tax history came in 1913 when 42 of the 48 states ratified the 16th Amendment, which increased the taxing authority of the federal government. In case you're curious, the states that didn't ratify the 16th Amendment were Utah, Virginia, Rhode Island, Florida, Pennsylvania, and Connecticut.

Marginal tax rates apply only to income earned in the bracket with which they are associated. To clarify this point, let's use an example.