Christopher Curley holds a B.A. in English and Philosophy from Ursinus College. He has extensive writing experience, contributing on topics including health, wellness, health research policy, and health science, as well as tutoring experience in English and standardized testing prep.

Metaphors, whether extended or mixed are commonly used to communicate ideas and emotions. Although similar, they play a very different role in language than similes. Take a moment to master the differences between these literary tools and learn when and how to apply each. Updated: 08/29/2021
Create an account

Definition of a Metaphor

The metaphor is the grand pooh-bah of literary terms, a kind of analogy that uses figurative language connecting one thing to another to highlight how they're alike. Metaphors are so commonplace that you probably use dozens of them every day without ever realizing it. 'Life is a journey', after all. 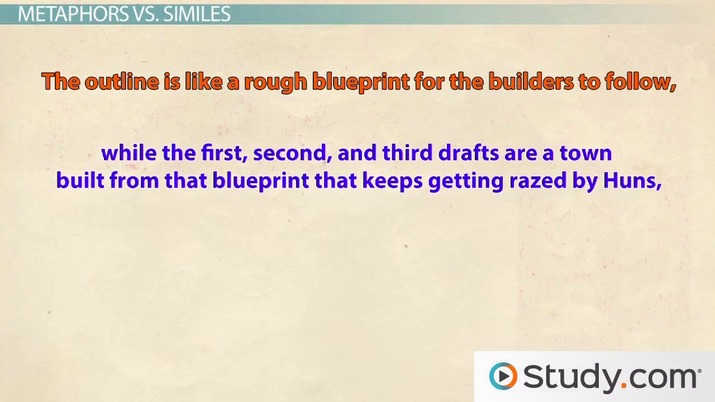 Coming up next: Synecdoche vs. Metonymy: Definitions & Examples

So let's look at a few. When you 'get up to join the rat race' in the morning, you're engaging in a kind of metaphor. 'Rat race' conjures up the image of scurrying hither-tither with no clear end in sight, a metaphor for the hustle and bustle of 9-to-5 working life. Similarly, when I say that Roger Federer (the tennis player) is a backboard, I don't mean that he's literally made of wood, but the metaphor implies that he returns his opponents' balls as surely as a backboard does.

Metaphors are powerful because they upset our expectations of a boring, literal connection between ideas, and force our brains to work harder to understand the writer's intent. Once we grasp that intent, the revelation leads to a more vivid image and/or emotional response.

Kin to the metaphor is the extended metaphor, which is pretty much exactly what it sounds like: a metaphor written large and lengthy to make an even deeper, more involved comparison between the subject and the thing it's being compared with. Extended metaphors often pop up in poetry and fiction, as in this passage from poet Emily Dickinson, who was a great lover of extended metaphors:

My Life had stood - a Loaded Gun -

In Corners - till a Day

And carried Me away -

The poem then continues the metaphor, comparing the subject's life to that of a loaded gun, living unwanted and unused until chosen, then guarding its master, and waiting for a chance to be useful (that is, to shoot or kill someone). Extended metaphors are wonderful when done right - and this is a good one - but can quickly become unintentionally humorous if not written with a light touch.

Then we have the simile. If your comparison uses the terms 'like' or 'as', your analogy is most likely a simile and not a metaphor, even though they function similarly. Some argue that a simile is a kind of metaphor, but I'll address that in a moment.

For instance, if I want to use an analogy to explain the process of writing a story, I might say that 'The outline is like a rough blueprint for the builders to follow, while the first, second and third drafts are a town built from that blueprint that keeps getting razed by Huns, with architects improving upon each version until they finally build houses strong enough to withstand fire; what you're left with is the final draft.'

Spot all the differences? While not every simile uses 'like' or 'as,' the important thing to remember is that the metaphor makes the subject equivalent to the thing it's being compared to, while the simile qualifies the comparison, letting you know that one thing is simply 'like' another thing - not equal to it.

This quality of equivalence makes the metaphor a stronger device for drawing poetic and comparative links between things. But when you start writing your own metaphors, you'll want to choose your battles carefully. For instance, there's a subtle, but important difference between saying 'Your mother is a tall drink of water,' and saying 'Your mother is like a tall drink of water: slender and very refreshing.' A good metaphor forces your brain to consider something from an entirely new angle, revealing wondrous new possibilities. A bad metaphor is a shark in a Santa hat: woefully inappropriate and entirely absurd.

Speaking of woefully inappropriate and entirely absurd, you should also be aware that mixing two or more metaphors is generally a big no-no, unless you're doing it purposefully for comedic effect. In literature, this is sometimes done to show that a character thinks he's smarter than he really is; in your writing, if you mix your metaphors unintentionally, your audience will think the same thing of you. 'It's important to put all your ducks on the same page', a mish-mosh of 'it's important to put all your ducks in a row', which means to be orderly like a line of ducks, and to 'get everyone on the same page', which means to make sure everyone is focused on the same agenda.

Mixed metaphors usually happen when people mix up conventional metaphors in the form of idioms and accidentally squeeze one into another. It's funny, but if you want to be taken seriously, try not to burn your bridges until you come to them.

Completing this lesson should prepare you to:

What is a Metaphor? - Examples, Definition & Types
Related Study Materials

What is a Dialogue in Literature? - Examples & Explanation

What Are Suffixes? - Examples & Definition