Erin has an M.Ed in adult education and a BS in psychology and a BS in management systems.

There's no denying that the concept of family has certainly changed in American society over the last few decades. Statistics continue to show that fewer Americans are getting married, and those who do so are having fewer children or none at all. More marriages are ending in divorce. More people are living alone, cohabiting with someone, or marrying more than once in a lifetime and creating stepfamilies.

Traditional families once dominated every neighborhood. A traditional family consists of a husband and wife, plus their children, whether biological or adopted, if they have any. Today, American society displays greater diversity, and many American households can be considered non-traditional under this definition.

Family structures that may be considered non-traditional or alternative include single parenthood, cohabitation, same-sex families, and polygamy. Let's take a brief look at each of these. 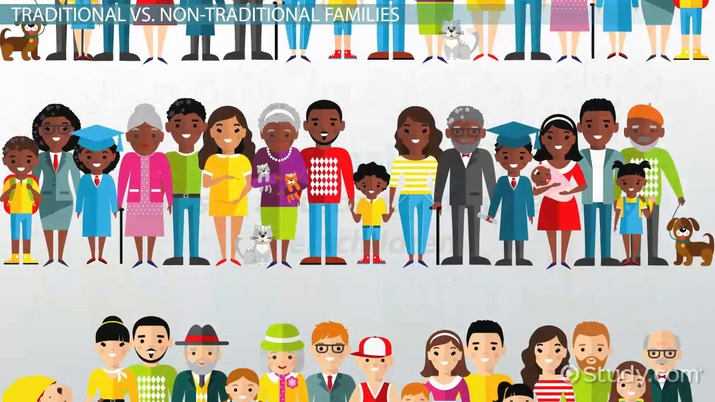 Single parenthood was fairly common prior to the 20th century due to the more frequent deaths of spouses. But at that time, there was a certain stigma surrounding being a single parent. Today, single parenthood is considered more acceptable. One-parent families may still result from the death of a significant other, but now also come about through circumstances, including a parent's choice or divorce.

Cohabitation is the sharing of a household by an unmarried couple. This arrangement continues to gain popularity in the U.S., and cohabiting couples and their children made up approximately 15 million households according to the 2012 U.S. Census. Cohabitation can be seen as an alternative form of marriage, and in many ways, it is similar to marriage. It can be used by couples wanting to test their compatibility or by couples whose marriage would not otherwise be legal. However, it does not receive the same formal recognition or legal benefits as marriage, and cohabiting adults may face social disapproval from family or faith communities where traditional marriage is considered the ideal or standard.

Up until June 26, 2015, same-sex marriage, that is a marriage between two men or two women, was not legal in most states. This long-simmering and controversial issue was legally settled by the U.S. Supreme Court ruling in Obergefell v. Hodges, making same-sex marriage legally recognized in all 50 states. However, same-sex families may still face social resistance.

In the U.S., monogamy, marriage consisting of only two partners, is the norm. However, in some societies, polygamy, which is a marriage consisting of more than two partners, is common. Polygamy usually exists as a man married to more than one wife at a time, although it can also apply when a woman is married to more than one husband at a time. Polygamy is illegal in the U.S., so those who choose to live a polygamist lifestyle are typically legally married to one spouse and cohabiting with the other spouses. Although it's difficult to find hard statistics, it is generally believed that polygamist families make up a very small portion of American households.

Singlehood is the last alternative household we'll discuss in this lesson. Because nine out of ten people in the U.S. marry, we tend to think of singlehood as only temporary. However, increasing numbers of people, about 32 million, live alone, and many do so by choice. These individuals are found in higher concentrations in large cities or metropolitan areas.

Today, having a spouse is often a matter of choice rather than a financial necessity or a cultural requirement, yet many single men and women still report social pressure to get married. Although single men are typically portrayed as happy bachelors who don't want to settle down, how often have you heard the phrase, 'He just hasn't found the right girl yet?' Single women often feel more pressure than men, as they are sometimes portrayed as unhappy old maids who can't find a man to marry them. Nevertheless, many singles, both male and female, are secure and happy with their status.

In summary, our diverse society today is no longer dominated by traditional families that consist of a husband and wife, plus their children. By that definition, many households in the U.S. are non-traditional. In this lesson, we discussed five alternative households. Today's families may be characterized by single parenthood, cohabitation, same-sex marriage or polygamy.

Single parent families are headed up by a mother or a father who is single by choice or by circumstances. Cohabiting couples are living together but not married. Same-sex marriage includes couples, two men or two women, who are legally wed. And polygamous families are usually headed up by a man with multiple wives, although only the first wife is legally wed. Additional wives are cohabiting in practice.

What Is a Non-Traditional Family? - Definition of Options
Related Study Materials

What is a Cognitive Interview? - Questions, Techniques & Evaluation