I have a Bachelor's degree in Elementary Education and Spanish. I have taught for 5 years in bilingual classrooms of various elementary grade levels.

What Is a Pattern?

You can observe patterns - things like colors, shapes, actions, or other sequences that repeat - everywhere. Think about words or melodies in songs, lines and curves on buildings, or even in the grocery store where boxes and jars of various items are lined up.

But, one of the most common places to find patterns is in math. Math patterns are sequences that repeat according to a rule or rules. In math, a rule is a set way to calculate or solve a problem. 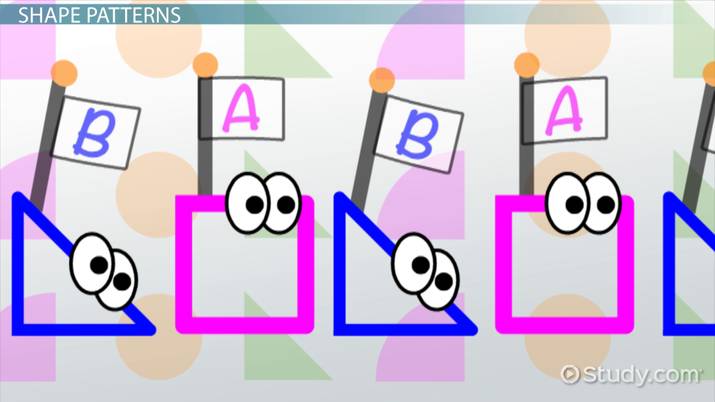 Coming up next: Pascal's Triangle Lesson for Kids: Definition & History

One common type of math pattern is a number pattern. Number patterns are a sequence of numbers that are ordered based upon a rule. There are many ways to figure out the rule, such as:

It's important to remember that a number pattern can have more than one solution and a combination of rules. If this is the case, try to think of the simplest rule possible, like adding 1 or multiplying by 2 with a difference of 3.

Let's review by going back over all our terms for understanding patterns in math. A pattern is a series or sequence that repeats. Math patterns are sequences that repeat based on a rule, and a rule is a set way to calculate or solve a problem. There are two main types of math patterns: number patterns, or sequences of numbers arranged according to a rule or rules, and shape patterns, which are labeled by using letters and the way that they repeat.

Applications of Patterns in the Real World:

Create an account
What is a Pattern in Math? - Definition & Rules
Start today. Try it now
Math / Math for Kids
Math for Kids

What is a Pattern in Math? - Definition & Rules
Related Study Materials

Look for a Pattern: One & Two Operation Problems with Positive Decimals

Fractals in Math Overview & Examples | What is a Fractal in Math?

Quarter, Half & Whole Turns in Math: Lesson for Kids