In a digital age, where our ears sense airwaves but computers communicate in digital data, there is a need for sound cards. Learn how they enable digital audio to be heard, and the various types that are used today. Updated: 09/09/2021
Create an account

Most of your music collection is probably in digital format, either on CDs or as files on your computer. In order to be able to listen to your music, a sound card converts digital data to analog sound waves you can hear. The output signal is then connected to a headphone or set of speakers. You can also use a sound card to record audio with a microphone. 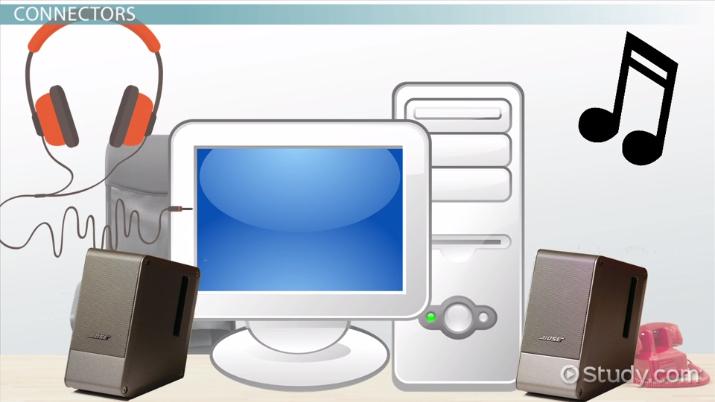 Coming up next: What is a Web Browser? - Definition & Examples

The motherboard on most computer systems has an integrated sound card, which is often sufficient for many users. However, to get higher quality sound you can upgrade to a separate sound card, which uses better and more expensive components.

Audio files on a computer consist of digital data just like any other file on a computer. Sounds we can hear consist of waves that travel through the air - sounds are analog. The primary function of a sound card is to translate between digital and analog information, just like a video card. Sound cards typically have four major components:

On some sound cards, the two types of converters are integrated into CODEC a single coder/decoder chip. Some sound cards also have a digital signal processor (DSP), a built-in processing unit. The DSP takes some of the load of the central processing unit (CPU) to convert between digital and analog. Similarly, some sound cards have their own memory. Sound cards without a DSP or memory will use the motherboard's CPU and memory.

Computer systems typically have built-in speakers, which are reasonably good if you don't turn up the volume too high. If you want to use your computer for some serious music for a party, you probably want to connect a set of external speakers. Relatively small external speakers can be powered using a USB connection, while larger ones need their own power supply. Similarly, most computer systems have a built-in microphone, but you can also connect an external microphone.

Serious audiophiles who use their computer as their sound system will typically upgrade to a high-end sound card, a set of good external speakers, and a good external microphone (if they want to make their own recordings). A high-end computer system can rival dedicated music equipment. In general, with the improvements in sound and video, computer systems have turned into multimedia systems rather than simply computing devices to run software.

The 3.5 mm connector is by far the most widely used type for computer systems as well as other portable electronics. The larger 6.35 mm connector is used mostly in dedicated audio systems, such as electric guitars, loudspeakers, and microphones. These types of connectors have their origin in telephone switchboards and are therefore sometimes referred to as 'phone connectors'. More commonly, they are also referred to as audio jacks.

What about external microphones? Most use the same 3.5 mm connector as external speakers. As a result, some sound cards have quite a few identical looking connectors. This gets confusing, so a color-coding scheme was developed. For example, the color-coding might appear as follows: pink for a microphone input, light blue for an analog audio input (other than a microphone), light green for the main stereo analog audio output, and orange for a center channel speaker or subwoofer.

So how does stereo work using a single connector? Take a closer look at a 3.5 mm audio connector. Notice the two black rings?

So what about some of those smartphone models that have a single connector for stereo sound and a microphone? These use one more ring and the connector is therefore called TRRS, for tip-ring-ring-sleeve.

A sound card converts between digital data and analog sound. This allows you to listen to music and record your own sound. Different types of connectors on a sound card allow you to use external devices, such as headphones, higher quality speakers, and a microphone.

This lesson on sound cards should teach you to:

What Is a Video Card? - Function, Definition & Types

What Is a LAN Card? | History, Function & Types

What is an Optical Drive? | Types & Function

What is a Motherboard? - Definition, Function & Diagram

Network Interface Card Types & Function | What is an NIC?

Hard Drive Overview, Types & Function | What is a Hard Drive?

Floppy Disk Overview & Types | What is a Floppy Disk?

What is a Computer Keyboard? - Parts, Layout & Functions

What is a Workbook in Excel? - Characteristics and Options