Microsoft Excel is a spreadsheet software that allows users to easily organize information. Learn more about the characteristics and workbook options in Excel. Updated: 10/12/2021
Create an account

Harry is working on a report about test scores at different middle schools. He's trying to put together some data for one of his classes, and his friend suggested that he use Microsoft Excel software. Harry has heard of Excel, but he doesn't know exactly what it is or what to expect. How can it help Harry with his data?

Excel is a spreadsheet software. It allows users to create spreadsheets of data, which in turn lets them organize information. For example, Harry has a lot of data. He has the test scores of every student in the 8th grade for five different schools. That's a ton of information! By putting those test scores into an Excel workbook, Harry can use the data more easily.

To help Harry out, let's look closer at Excel, including the difference between workbooks and worksheets, and how to create and work with multiple workbooks at once. 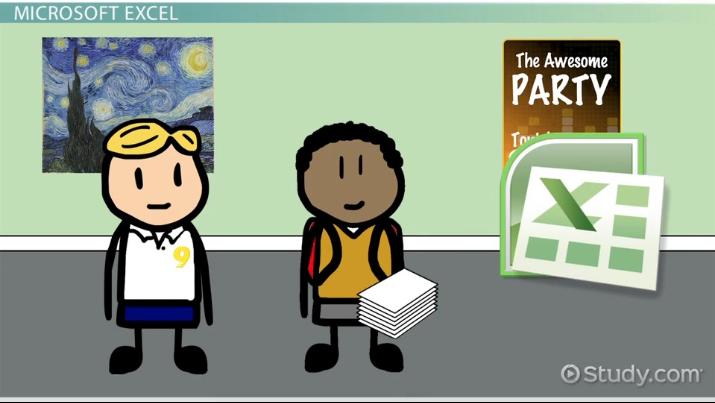 Coming up next: How to Modify the Worksheet Tab in Excel

Harry has a lot of information, and from what he's heard, Excel is a good place to organize that information. But he's also heard that there are workbooks and worksheets in Excel. He doesn't know the difference between the two, or which he should be using.

In Excel, a worksheet is a single spreadsheet of data. On the other hand, a workbook is an Excel file with one or more worksheets.

Think about it kind of like a 3-ring binder. A workbook would be the entire binder, with everything in it. In contrast, a worksheet would be like one section in that binder.

So, how should Harry organize his information using workbooks and worksheets? Remember that he has the test scores for every 8th grade student in five different schools. That's a lot of information!

One way that Harry might want to organize his information is to create one workbook for all the data. Within that workbook, he could have a different worksheet for each different school. That way, he can see how all the different students did based on their schools.

That all sounds pretty good, but Harry isn't sure. He thinks it might be better to create an entirely new workbook, or Excel file, for each school.

If Harry wants to look at more than two workbooks at once, he can choose 'View' and 'Arrange all' from the ribbon. This allows him to choose to display all of the open workbooks at once. He can choose to look at them tiled, arranged horizontally or vertically, or several other ways. For example, if he had a different workbook for each school, he could look at them all at once by selecting one of the 'Arrange all' ways.

Crucial Parts of an Excel Workbook

Ribbon: The ribbon is a series of menus at the top of the software.

View: 'View' is located in the ribbon and allows you to change the views.

Arrange all: 'Arrange all' is under the 'view' section and allows you to view all of the open workbooks at once

After viewing this lesson, you should be able to do the following:

What is a Workbook in Excel? - Characteristics and Options
Related Study Materials

How to Use Formulas & Functions in Excel

How to Sort Data in Excel

Fonts and Font Styles in Excel

How to Modify Cell Alignment & Indentation in Excel

What is Spell Check? - Definition & Use

What is a Histogram in Math? | Overview, Uses & Examples

Epimers in Chemistry: Concept & Examples | What are Epimers?

Sound Card Use & Types | What is a Sound Card?

Thesaurus Use & History | What is a Thesaurus?

How to Make Effective Business Decisions