Lesson Transcript
Instructor: John Williams
Acid, in chemistry, refers to the chemical agents that discharge hydrogen ions when added to water. Learn an overview of how acids work, their characteristics, definitions of weak acids and strong acids, and the different types of acids in the human body. Updated: 09/23/2021
Create an account

So many of us have heard of the term pH, which in general is the measure of the amount of acidity or alkalinity that is in a solution. More specifically, it is a measure of the amount of protons or hydrogen ions that are present in an aqueous solution. Acids are primary contributors to the measure of pH in a solution, and the presence of acids a key characteristic of almost all solutions, from blood in the body to foods and drinks we consume. Let's discuss what an acid is and how it affects the pH of solutions when added. 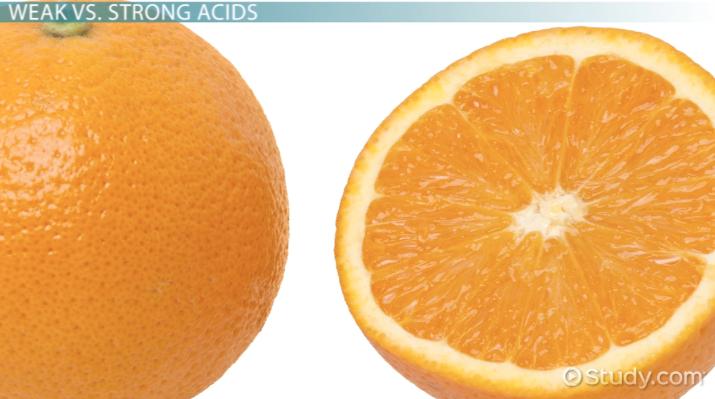 Coming up next: What is Oxidation? - Definition, Process & Examples

All acids will release hydrogen ions into solutions. The amount of ions that get released per molecule will determine if the acid is weak or strong. Weak acids are acids that partially release the hydrogen atoms that are attached. These acids, then, may lower pH by dissociation of hydrogen ions, but not completely. Weak acids include acetic acid, which is vinegar, and citric acid found in oranges and lemons.

Strong acids, on the other hand, completely dissociate and release ALL of their hydrogen atoms. This means that strong acids, in general, are more potent in lowering the pH of a solution. There are only 7 strong acids, including hydrochloric acid, which can be found in the stomach, and sulfuric acid, a corrosive acid found in things such as car batteries and fertilizers.

Many molecules can act as acids, even if they are not primarily used as acids. For example, adenosine triphosphate, or ATP, is a molecule used in the body for energy. But when added to a solution, ATP also releases hydrogen ions, which means it also can be considered an acid. Likewise, amino acids, which are the building blocks of proteins, will also release a small amount of hydrogen ions into aqueous solutions.

Acids and the Human Body

One of the coolest ways to look at acids is through their uses in the human body. Many of the processes that are present in the body require acids to maintain them. Examples include:

Other Common Characteristics of Acids

There are other common ways in which the characteristics of acids are experienced in everyday life, and in chemistry. For instance:

2) They taste sour in aqueous solutions

Acids are chemical agents that release hydrogen ions when added to water. The pH scale is used to show the acidity level of a given solution. When using the pH scale, more hydrogen ions equals a lower pH and a more acidic solution. Acids can be classified as weak or strong, depending on the amount of hydrogen ions that dissociate when the acid is placed in water. Acetic acid is an example of a weak acid, while hydrochloric acid, which is found in the stomach, is classified as a strong acid.

Acids also play many important roles in the human body, such as the building of proteins, which are made up of amino acids. Acids are a key characteristic of almost all solutions. This includes solutions that taste sour, the use of litmus paper to test for acidity, and acidic reactions that lead to the formation of salts.

What is Acid in Chemistry? - Definition & Overview
Related Study Materials

Base in Chemistry | Definition & Examples

Salt Properties & Chemical Formula | What is Salt in Chemistry?

Common Acid Types & Examples | What is Acid Used For?

Reduction in Chemistry | What is the Reduction Process?