Air pollution is a mixture of harmful particles and gases in the atmosphere. Learn the definition of air pollution, discover its sources, and explore the different types of air pollutants that exist. Updated: 09/16/2021
Create an account

What Is Air Pollution?

Being sick is pretty lousy, isn't it? If you know someone who has a cold, you tend to steer clear of them because you don't want to catch their germs. Every time that person coughs or sneezes, their germs get put into the air and are then free to travel to the next person. Can you imagine trying to contain something like that in the air? It would be pretty difficult because, not only are the germs invisible, but they expand outward as they enter the air.

We don't think of germs as air pollution, but it really is the same idea. Air pollutants are gases and particles in the atmosphere that harm organisms and affect climate. Air pollution, then, is the release of these particles and gases into the air. For the previous example, the germs would be the pollutants, but the air wouldn't be polluted until those germs are sneezed out. 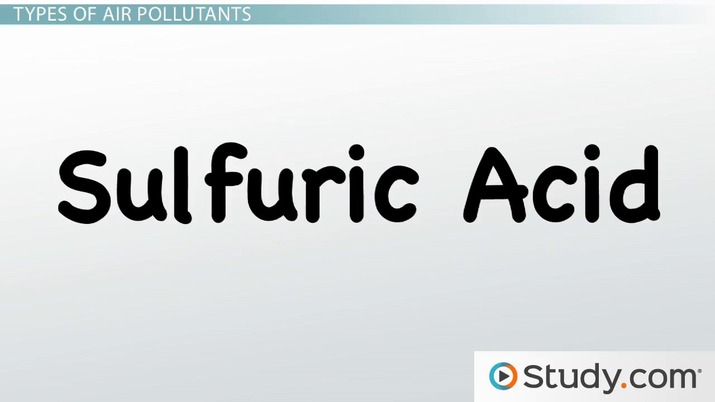 When you think of air pollution, you likely think of human activities, such as coal-burning plants and emissions from cars, planes and boats. But, air pollution also comes from natural sources. Volcanoes are a great example of a natural pollution source; they produce large amounts of particles and gases, and the eruptions send them up into the atmosphere. Forest fires are a natural process that also produce large amounts of potentially harmful gas and particulate matter.

In another lesson, we learned about the Clean Air Act of 1970, which set limits on emissions and standards for air quality, provided funding for pollution control research and made it possible for citizens to sue those who violate the standards. The standards set forth in this legislation by the Environmental Protection Agency, or EPA, identified six pollutants as those that posed the greatest threat to human health. Let's look at each one.

Carbon monoxide is both odorless and colorless, and it's produced through combustion. Most carbon monoxide emissions come from vehicles, about 62%, but they also come from forest fires, lawn equipment and the burning of industrial waste. This pollutant is dangerous to human health because, even in very small concentrations, it can prevent oxygen from being delivered through your body to major organs. At higher levels, it can cause death.

Sulfur dioxide is also a colorless gas, and it's highly reactive. About 70% of sulfur dioxide emissions come from combustion at industrial power plants, like those that generate electricity from coal. Sulfur in the coal reacts with atmospheric oxygen in the air and forms the compound sulfur dioxide. Once in the air it may react further to create sulfur acid, which can fall back to Earth as acid rain. Sulfur dioxide can also cause respiratory illnesses when it's breathed in.

Nitrogen oxides are a family of gases that are also very reactive, but you can definitely see and smell these! Both nitric oxide and nitrogen dioxide are in this family, and these are the gases that contribute to the smog you see over large cities, like Los Angeles. More than half of these pollutants come from vehicle combustion emissions, with a large amount also coming from industrial combustion. Nitrogen oxides also cause respiratory illnesses.

Ozone is a tricky one because when it's in the stratosphere layer of the atmosphere, it protects us from harmful UV radiation. However, when ozone is lower in the atmosphere, it becomes dangerous to our health because it causes respiratory illnesses and damages ecosystems. Ozone is a secondary pollutant because it reacts from a combination of sunlight, heat, nitrogen oxides and volatile carbon containing compounds.

Particulate matter is just what it sounds like, particles suspended in the air. This can be both liquids and solids, and about 60% of particulate matter pollution is wind-blown dust. The problem is that particulate matter can also be some of those harmful pollutants previously described, as well as toxic chemicals and metals.

Finally, we have lead, and this is a naturally occurring heavy metal that gets into the air as a particle. Lead used to be added to gasoline because it greatly improved engine performance. However, once it is emitted into the air, it may be inhaled or deposited on land. If ingested by animals, it accumulates in the body and can cause central nervous system malfunction and mental retardation. Because of this, lead was removed from gasoline in industrial nations, like the U.S., and you can see this next time you visit the pump and fill up with unleaded fuel. Unfortunately, many developing nations still add lead to their gasoline.

The Clean Air Act of 1970 was legislation that set new standards for air quality, imposed new limits on emissions, funded pollution control research and gave people the ability to sue those who violated the standards. The EPA identified six major types of air pollutants deemed especially harmful to human health. These are carbon monoxide, sulfur dioxide, nitrogen oxides, ozone, particulate matter and lead. Since the Clean Air Act of 1970 and the identification of these pollutants, air pollution has decreased markedly. However, air pollution is still an issue, and many people in both developed and developing nations live in areas where these harmful pollutants continue to be a source of health issues and environmental problems.

What Is Hazardous Waste? - Definition and Types

What is the Biogeochemical Cycle? - Definition & Explanation

Water Conservation: How Water Management Can Lead to Sustainable Use