Investigate the chemical compounds known as alkaloids. Discover their composition and structures, and explore examples of alkaloids in medicines and psychotropic drugs. Updated: 12/13/2021
Create an account

When you think of nitrogen, you might be picturing a race car expelling blue flames from a nitrous oxide tank. Or you might be thinking of nitrogen in fertilizers, leisurely applied to farms with a tractor.

Although these are great uses for nitrogen, important molecules in our body also use nitrogen. Nitrogen is actually just an atom, and atoms bound together make up molecules. Naturally occurring molecules that are composed of nitrogen and carbon are called alkaloids. Alkaloids usually have a ring structure, which includes at least one nitrogen atom.

Alkaloids are made by all living things, but many alkaloids are isolated from plants. Most plants only produce a few types of alkaloids and the function of them in plants is not clear. Some scientists think they may be involved in seed production. Regardless of their role in plants, many alkaloids have uses in medicine for humans. 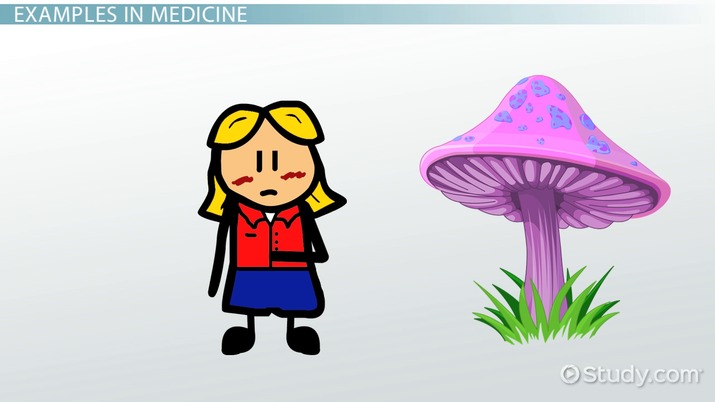 Alkaloids derived from plants have a long-standing place in medicine. Pain killers derived from the poppy plant, like morphine, have been around since 1805. The antimalarial drug quinine has been used by tribes in the Amazon for over 400 years. Let's look more in detail about some of these important alkaloids.

Morphine is a powerful painkiller, usually used when someone needs surgery or has a severe injury. Morphine attaches to sites on our nerve cells and prevents them from receiving messages about pain from the body. The result is a euphoric state with no pain. Although perfect for surgery, this alkaloid is extremely addicting and can become a drug of abuse.

Derivatives of morphine include oxycodone, which is used as a pain medication but is also extremely addictive and heroin. Heroin was designed as a drug to replace morphine in hospitals, but now has no medical use. It is only used illegally for its euphoric effects and users can quickly become dependent on this alkaloid.

You've probably heard of malaria, a parasite transmitted by mosquitos. Malaria infects blood cells, releasing toxins into the blood that can cause flu-like symptoms, which can turn fatal in some patients. When a person has malaria, doctors use an alkaloid called quinine to treat them. Most patients take quinine for three to seven days and will feel better within a day or two after the treatment has started. Although essential to curing patients of malaria, this alkaloid has some side effects, like low blood sugar, nausea, and some psychological effects, such as nervousness or confusion.

Atropine is an alkaloid isolated from Atropa belladonna, or deadly nightshade. The purple flowers and berries of the belladona are quite beautiful but are lethal if consumed by humans. However, alkaloids carefully derived from this plant can be used in medicine. Atropine is one example which prevents messages from being sent from the brain to muscle. The brain communicates with the muscle using a chemical called acetylcholine, so atropine is called an anticholinergic medication.

Since atropine slows down muscles, it can be used to treat digestive symptoms where the intestines are overactive, creating diarrhea by moving food through too fast. It can also be used as an antidote for poisoning by mushrooms, which cause overactive muscles, leading to paralysis.

Psychotropic drugs are compounds that change the way we think and feel. Although morphine has psychotropic effects, it is primarily used as a medicine. Here, we'll look at two common drugs that create an energetic effect: cocaine and caffeine.

Cocaine is a drug of abuse that stimulates the central nervous system. Cocaine causes increased alertness, confidence, and energy, and is usually snorted through the nose by users. Cocaine also has a local analgesic effect, creating a numb feeling in the face when inhaled. Cocaine can be extremely addictive in some users, and often has negative side effects like heart palpitations, nervousness, over-excitability, and damage to the nasal cavity. Some users might even degrade the cartilage between the nostrils, called septal perforation, an ugly side effect.

A much milder and socially acceptable stimulant is caffeine. An alkaloid found in many drinks like coffee and tea, caffeine gives you a quick boost of energy and alertness but can also cause nervousness, headaches, and dehydration. Caffeine can also be purchased in pill form now, which can lead to overdoses if you do not follow the directions. Overdosing on caffeine can cause severe heart problems, like arrhythmia.

Alkaloids are nitrogenous compounds, usually with a ring structure, found in living things. They are basic and can accept hydrogen ions from other compounds. Most alkaloids are isolated from plants but have medical uses in humans. Morphine and its derivatives are used as pain medication and quinine treats malaria. Atropine is an antitoxin for certain mushroom species and can be used to treat severe diarrhea. Other alkaloids have psychotropic effects, changing how we think and feel, like cocaine and caffeine.

The process of studying this lesson could assist you in completing these goals:

What Is an Alkaloid? - Definition & Examples
Related Study Materials

How Plants Defend Against Pathogens & Herbivores