Angela has taught for Language Arts for 12 years and holds a master's degree in Literacy.

An almanac is an annual publication that contains valuable and pertinent information about the forthcoming year. Learn about the definition, etymology, and history of early modern and modern-day almanacs. Updated: 10/13/2021
Create an account

What Is an Almanac?

Have you ever wondered when the best planting dates for crops would be? How about whether or not the winter in northeastern Ohio will produce an above average snowfall? Maybe you want to know when the next lunar eclipse will be. If you have pondered any of these questions, an almanac would be the place to go for all these answers and more!

An almanac is an annual publication that contains a wealth of information about the forthcoming year. Weather predictions, best dates for planting crops, dates of eclipses, times of tides, and farmers' planting dates are all pieces of information found in an almanac. Almanacs can even contain world records, population statistics, recipes, religious feasts, holiday information, and even predictions about trends in technology and fashion.

The etymology, or word origin, of the word 'almanac' is not 100% clear. 1276 was the earliest documented use of the word almanac by Roger Bacon, an English philosopher, where it was used to describe a set of tables that described the movement of the moon and sun. The word may have derived from the Greek word almenichaiaka, which means calendar. Another theory is that the word almanac was an Arabic word, al-manakh, meaning climate. 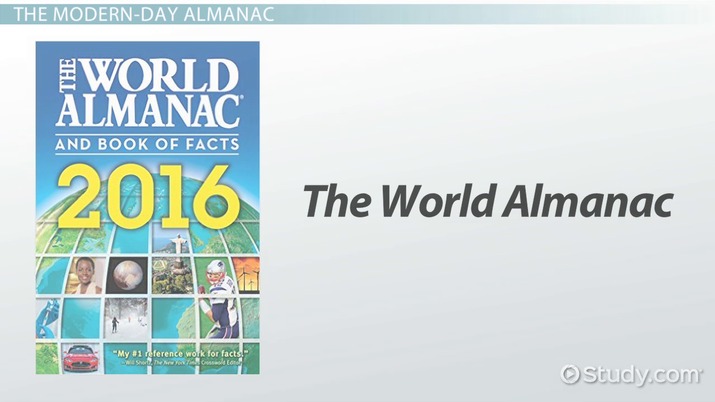 Coming up next: What is Historical Fiction? - Definition, Characteristics, Books & Authors

History of the Almanac

Would you believe that the first evidence of an almanac can be traced back to around the 16th century BC? At the time, they were referred to as hermerologies, which in Greek, means day. The information found within these early almanacs revolved around the listing of days and labeling them as favorable or unfavorable and advice on what to do on these days.

As centuries passed, a Greek almanac emerged, called the parapegma, which was a precursor to the modern day almanac. It started off as a table carved in stone, with the days of the month and contained information on star phases and weather predictions. It also had moveable pegs to chart these changes from day to day.

In the second century AD, an astronomer by the name of Claudius Ptolemy hypothesized that astronomical changes were what was creating the alterations in weather. He created a piece of work called Phasei, which translates to phases of fixed stars and collection of weather-changes. This contained a list of dates in which the weather changes, the mapping of stars and constellations, and solar events all organized into a solar year.

Origins of the modern day almanac can also be connected to Babylonian astronomy, which covered daily positions of the sun, moon, and planets in the 12th and 13th centuries. Solomon Jarchus in 1150 is said to have created one of the first modern day almanacs and would soon be followed by Petrus de Dacia and Roger Bacon in the 1300s. In 1472, at Mainz in Germany, Gutenberg, a German printer and publisher, produced the first printed and published almanac.

By the 16th and 17th centuries, almanacs were being published in England as well, becoming bestsellers only behind the Bible. In 1639, the first published American almanac was produced by William Pierce of Harvard College. Harvard then became the first central place where the almanac was published. Early American almanacs were created by Americans, such as Nathaniel Ames, James Franklin, and then his brother, Benjamin Franklin, who began publishing the Poor Richards' Almanac from 1733 to 1758. These early modern almanacs contained a variety of reading material including calendars and weather predictions, interesting statistics and facts, medical advice and remedies, jokes, and even fictional short stories.

There are several types of almanacs in existence today. The oldest almanac in North America is The Old Farmer's Almanac, which has been published every year since 1792. The Old Farmer's Almanac still remains the more traditional annual version that contains the weather predictions, planting tables, astronomical data, recipes, and more.

Currently, there are other versions of the almanac, such as The World Almanac, which was first published in 1868. This almanac contains factual information on subjects such as world events, sports accomplishments, important historical dates, pop culture, and more. There is even a kid's version of the World Almanac, which also contains factual information, puzzles, and games, geared toward youth.

The traditional definition of an almanac is an annual publication that contains a wealth of information about the forthcoming year. While the almanac has spanned centuries and the content has changed, the intent of it has not. An almanac is geared toward providing the reader with information about the world around them. What initially began in the 16th century BC, to our current variations of this reference resource, an almanac has provided the reader with answers to questions about weather patterns, tides, planting calendars, and even entertainment. This annual publication will continue to provide its readers with information for years to come.

What is an Almanac? - Definition & History
Related Study Materials

Thesaurus Use & History | What is a Thesaurus?

What is a Dictionary? | History, Uses & Creation

Reading an Atlas: Lesson for Kids

What is an Open Compound Word? - Definition & Examples

What is a Glossary? - Definition & Examples