Lauren has a Bachelor's degree in biology from Virginia Tech and Master's degrees in environmental science & policy and special education from Johns Hopkins University. She has 20 years of teaching experience in public, private, and informal educational settings.

This lesson will introduce you to the atom, which is the smallest building block of everything in our universe. You will learn about the basic structure of atoms and how they form different substances. Updated: 01/10/2020
Create an account

You can't see atoms, but they make up everything around you: your chair, your desk, the birds outside, even you! Atoms are the foundation of matter, which is everything that makes up the universe around us. Each kind of atom makes up a pure substance called an element. You may have heard of oxygen, lead, and gold. Well, these are all examples of elements. Can you believe that a pure gold necklace is made up of billions of gold atoms? 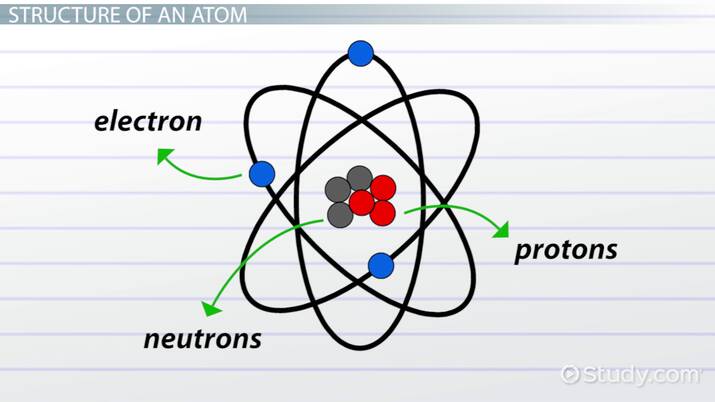 Coming up next: What is Mass? - Lesson for Kids

Structure of an Atom

If you look inside an atom, you find tiny particles called protons, neutrons, and electrons. Atoms of each element have different numbers of these particles. Protons and electrons have electrical charges. You can think of this as being similar to a battery, which has a + (positive) and - (negative) sign. Protons are positively charged, which you can remember by noticing that there is a P in proton and a P in positive. Electrons are negatively charged. And like their name suggests, neutrons are neutral, meaning they do not carry any charge at all.

Protons and neutrons form the center of an atom, called the nucleus. Electrons spin around outside the nucleus in spaces called electron shells. These aren't shells like you'd find at the beach, though. That's just the name given to the different layers of space the electrons occupy. Each electron shell carries a certain number of electrons. The farther from the nucleus, or center of the atom, you go, the more electrons that can fit in each shell.

Atoms don't naturally break down into smaller parts. Additionally, they may exist on their own, but they also bond, or stick together. Bonded atoms can form all kinds of things. Sometimes, bonded atoms may be packed together so tightly that they can barely move. Imagine being stuck in a tiny elevator that's really crowded. When this happens, the atoms form solids, like rocks.

If atoms have more room to move, they form liquids. You can imagine this by thinking about how much more you could move if everybody were to get out of the elevator except you and two of your friends.

Atoms that are able to move freely form gases, which do not have any defined shape. Now imagine the elevator stops at the ground floor and the doors open to a really spacious lobby with many hallways; you and your friends might not stay together because you have a lot of room to wander about. This is the same idea when gases form.

Okay, let's take a moment or two to review what we've learned. Atoms are the smallest building blocks of matter and make up everything around us. Every atom has a center called a nucleus, which is made of particles called protons and neutrons. Electrons move in electron shells around the nucleus. Atoms can bond to one another to form solids, liquids, or gases.

What is an Atom? - Lesson for Kids
Related Study Materials

What Is Chemistry? - Lesson for Kids

Elements: What are they?