An earthquake refers to the sudden shaking of the ground due to the presence of seismic waves. Learn more about fracture, fault, elastic rebound, seismic waves, and other concepts related to the occurrence of earthquakes. Updated: 08/21/2021
Create an account

The Definition of an Earthquake

There are many scientific terms that are difficult to understand, but once in a while scientists actually use words that make sense! The word 'earthquake' literally means ground-shaking. Geologists also use the term in a broader sense when they talk about what happens below ground that produces the energy that causes the shaking.

As you can see in the above photograph of the aftermath of an earthquake in 1906, building collapse is one of the obvious results of ground shaking during an earthquake. You can see that the buildings in the foreground fell down, but the steel structures at left-center and right, which were buildings under construction at the time, remained standing - a clue that what a building is made of can determine whether it survives an earthquake. 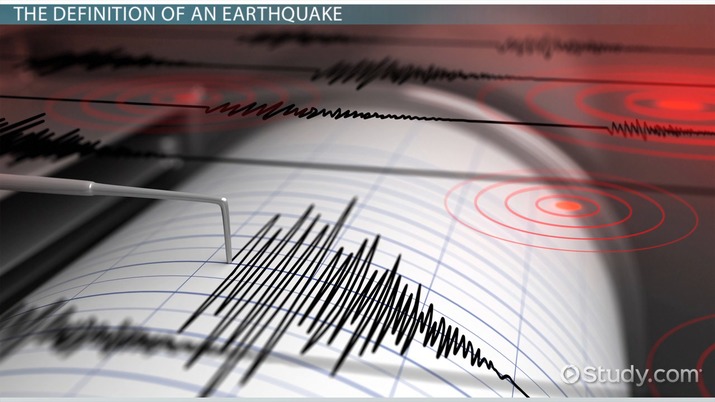 Coming up next: What is the Epicenter of an Earthquake? - Definition & Location

You may think that rocks are… well, solid as a rock. They are, but they also can be squeezed, stretched and broken. The rocks in the earth's crust are constantly being stressed by forces exerted on them by natural processes, such as the movement of the earth's lithospheric plates or the pressure built up by magma beneath a volcano. Rocks can either change shape or break in response.

Try to reproduce those conditions yourself using a different kind of solid: a twig or thin strip of wood. If you slowly apply force downward on each end, the stick will likely change its shape by bending. But if you try to bend it too fast (in other words, apply force too quickly) the stick will more likely snap. You are applying force to the stick just as rocks are subjected to forces within the earth.

Although rocks aren't as flexible as a stick, they can change shape when force is applied slowly. (Another word geologists use to describe rocks changing shape is deformation). On the other hand, they will break if too much force is applied or if force is applied too rapidly. Breaks in rocks are called fractures.

Deep underground rocks are squeezed tightly together along fractures. If stress (the applied force) builds up to a point that it overcomes the friction between the rocks on either side of the fracture, the rocks will abruptly slide past each other. Once that shifting has occurred, the fracture is thereafter known as a fault.

What Makes the Shakes?

Before rocks shift along a fault, squeezing or stretching forces cause large volumes of rock to deform. When sliding along the fault finally happens, the stress is relieved, and the rock snaps back to its original shape in a process known as elastic rebound. A lot of energy is released in the form of vibrations called seismic waves. The release of those waves is the event geologists identify as the earthquake.

As seismic waves pass through them, rocks vibrate. In the earth's interior those vibrations are small because the rocks are confined by surrounding rock. But when seismic waves reach the earth's surface, where soil and sediment are much freer to move, the waves slow down and the vibrations get bigger.

An earthquake can be defined simply as ground-shaking, but it's more complex than that. Rocks deep underground are squeezed tightly together along a fracture and are constantly being deformed by natural processes (like plate movement). When the stress is too much, the two sides of the fracture shift, becoming a fault. The stress is relieved, and the rocks can snap back into their original shape (an event known as elastic rebound). The energy from this creates seismic waves, which geologists use to determine that an earthquake has occurred. The seismic waves rise to the earth's surface, and those surface vibrations are the ground-shaking we feel during earthquakes.

What is an Earthquake? - Definition & Explanation
Related Study Materials

Cyclone Formation & Types | What Is a Cyclone?

Drainage Basin System & Examples | What Is a Drainage Divide?

What is Runoff? | The Water Cycle & Effects

SMCR Model Components & Process | What is the SMCR Model?

What are Natural Resources? Examples & Types

What is Communication? | Concept & Importance