An epidemic is a large outbreak of an infectious disease in a community, population, or region over a specified period of time. Learn how to define an epidemic and explore historical examples such as yellow fever, Ebola virus, and SARS-CoV. Updated: 11/02/2021
Create an account

What Is an Epidemic?

It was very difficult to go one day during the year 2014 without hearing something about Ebola in the news or on social media. It was one of the most frequently searched and discussed topics of the year. The reason for this is because people were worried about it.

Ebola is a deadly infectious disease, and it was spreading quickly. Many people in the U.S. were very afraid of Ebola, especially once people infected with the disease were brought from other countries into the U.S. for treatment.

When a disease is widespread to the point where it affects a disproportionately large number of people in a given area or a population at the same time, it is referred to as an epidemic. An epidemic is different from a pandemic, which is a disease that spreads throughout the world. There are also diseases that are considered to be endemic, which is when it is regularly found within a certain population of people. 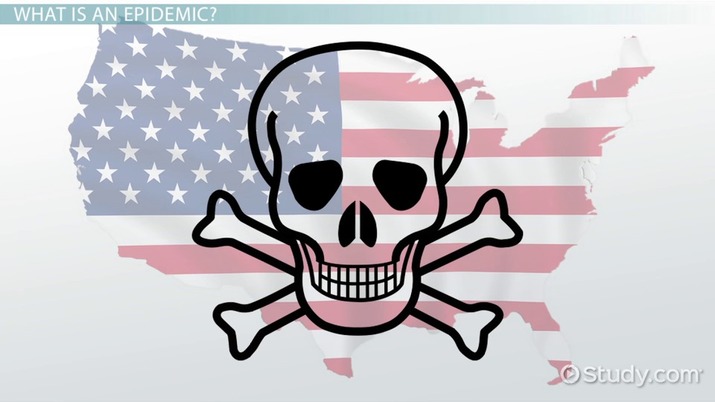 Coming up next: What Is Basal Cell Carcinoma? - Types, Symptoms & Treatment

There have been many examples of epidemics throughout history. Ebola, also known as Ebola Hemorrhagic Fever or Ebola Virus disease, can be caused by any of a few viruses belonging to the Filoviridae family of viruses.

Ebola was first discovered in 1976 in Africa. The virus is believed to have been in animals, such as fruit bats, chimpanzees, and gorillas. People somehow came in contact with the blood or other bodily fluids of these animals, and the disease was transferred to humans. Since then, there have been outbreaks of Ebola, but the outbreak in 2014 was the biggest and most widespread. The 2014 epidemic started in West Africa and spread from there. This epidemic claimed thousands of lives with a fatality rate ranging from 55-90% of those infected.

Another epidemic that you may have heard about was the 2003 SARS epidemic. SARS stands for Sudden Acute Respiratory Syndrome. This disease started in Asia and is caused by a coronavirus known as SARS coronavirus or SARS-CoV. Because it was an airborne disease that could be spread through sneezing and coughing, SARS spread very easily. Over 8,000 people contracted the disease, which caused 774 deaths. It remained heavily concentrated in Asian countries, but it did spread to North America and Europe; however, it didn't become an epidemic in those areas.

Let's look at an epidemic from a long time ago. One of the most severe epidemics ever in U.S. history was the yellow fever epidemic of 1793. This epidemic occurred in Philadelphia, PA, and was caused by mosquitoes that carried the virus. The virus was spread through mosquito bites and quickly affected thousands of people.

The population in Philadelphia at that time was about 45,000. Out of that, approximately 5,000 died from the yellow fever epidemic. It is believed that the only reason more people didn't die from the disease is because about 20,000 people left the city to avoid the epidemic. This epidemic started around July of 1793, and ended in November of that year, once the mosquitoes died due to winter conditions.

An epidemic occurs when a disease is widespread to the point where it affects a disproportionately large number of people in a given area or a population at the same time. We looked at some of the epidemics, including the Ebola epidemic of 2014 in West Africa, the SARS epidemic in Asia in 2003, and the yellow fever epidemic of 1793, which affected Philadelphia, PA, in the U.S.

What is an Epidemic? - Definition & Examples
Related Study Materials