Exports are goods or services manufactured in one country and sent to another to be sold to consumers. Learn how to define an export, explore the role of customs and free trade, and discover examples of popular exports such as vehicles and electronics. Updated: 10/14/2021
Create an account

Very few countries can exist in a vacuum. Most rely on other countries to ship them particular goods - whether it's something like oil, or maybe even the pair of jeans hanging up in your closet. Countries also rely on their international neighbors to buy the goods they create. This is the basis of exports.

Exports are goods that are produced in your own country and shipped to another country for sale. They can also be used for trade with another country if the home country needs a product from the country they are exporting to. Exports are often referred to when speaking about international trade, which is simply the exchange of goods and services with other countries. 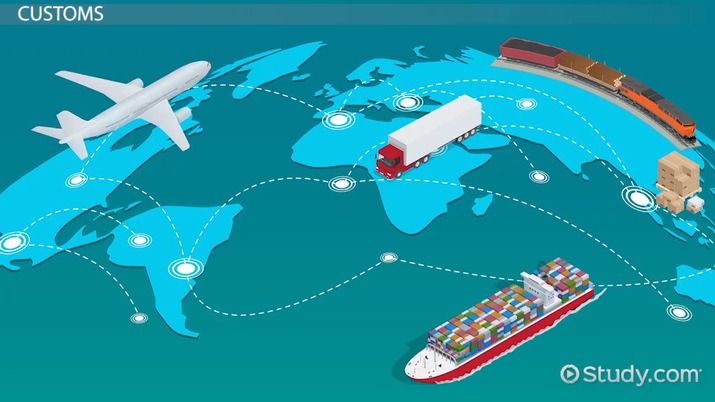 Coming up next: What is an Import? - Definition & Example

In the global business world we live in today, it is not just large companies that can drive increased sales by exporting or shipping their products outside their own border. If you can mail a product or upload or download it from an Internet site, it can be considered an export.

Most large companies shipping vast quantities of products often use air and ocean freight to ship goods. In these cases, it is often necessary to work with customs authorities in the country shipping and the country receiving the good. Customs officials help protect their home country by working to ensure that no illegal or unsafe goods are shipped into the country. They also play a vital role in stopping pirated and counterfeit goods, such as smart phones, computers, prescription drugs and shoes. In 2012 alone, customs seized almost $100 million dollars (in retail value) of knock-off Nike and other name brand shoes!

The ability to export goods helps an economy to grow by selling more overall goods and services, which increases the income and lifestyle of the citizens in the country. One of the key focuses of foreign policy in many countries is to encourage and find solutions that foster free trade, which removes additional taxes and limitations on exported goods such as tariffs, duties and quotas.

It is important to note that some countries are off-limits or very difficult to export to for legal reasons. If you live in the United States and your business was counting on shipping goods to Cuba, North Korea or Iran; you may be out of luck.

There are a number of different types of products that are manufactured in the United States and exported throughout the world.

The rest of the world would have a hard time transporting passengers and goods if it wasn't for some of the companies in the United States, such as Boeing, Beechcraft, Gulfstream and Cessna, which manufacture various jets and aircrafts and airplanes.

The auto industry is responsible for a lot of jobs in the United States. General Motors and Ford are also responsible for many people driving cars in countries such as Canada, Mexico, Germany, and China. In today's global economy it is interesting to note that the Honda car you drive may have been a model heavily exported or imported depending on where it was manufactured.

Exports are goods that are produced in your own country and shipped to another country for sale. They are a key part of international trade and increase the ability for an economy to grow by selling more overall goods and services. This results in better incomes and standards of living for the country's citizens.

Free trade is the trade between countries without the restrictions of tariffs, quotas, or taxes. In contrast to exports are imports, which are goods and services that are brought into a country.

What is an Export? - Definition & Example
Related Study Materials

What is an Import? - Definition & Example

Importing and Exporting in a Global Market: Definition, Process & Importance

The Political and Legal Environment of Marketing

What Is Contract Manufacturing? - Definition & Explanation

How Political & Economic Change Influence Each Other

What is Per Capita Income? - Definition & Example

What Is a Joint Venture? - Definition & Examples

What Is Financing? - Definition & Types

Countries in the Western Hemisphere Lesson for Kids