View bio
Learn what an ion is and how it forms. We will look at some common ions and get to know the terms for the two types of ions. Take the quiz at the end to see how well you understand the lesson. Updated: 05/28/2020
Create an account

Definition of an Ion

Let's recap a few things you probably learned a long time ago. There are 3 subatomic particles that are found in the atoms of an element. They are the positively charged protons, negatively charged electrons, and neutrons, which have no charge. Elements normally have the same number of protons and electrons in each of its atoms. This being the case, the atoms of the elements are neutral, meaning that they don't have a net positive or negative charge.

There are some instances when an atom may have a positive or negative charge. When the atom has a charge, it is now known as an ion. Atoms will pick up or lose electrons, which creates this charge. Electrons move around to reach the goal of having a full outermost shell within the atom in order to be stable. 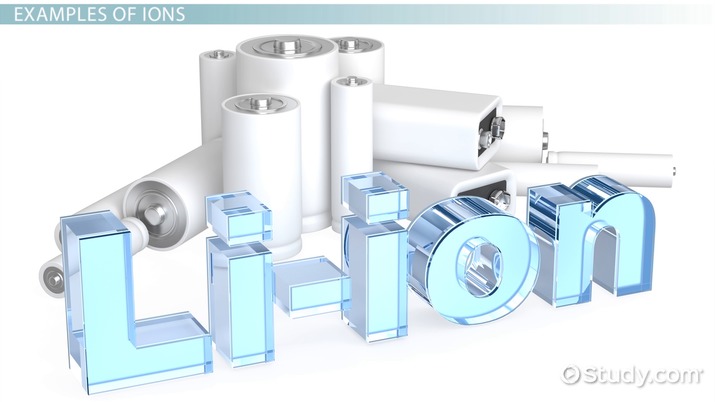 Coming up next: What is a Solvent? - Definition & Examples

Formation and Types of Ions

The positively charged protons always remain the same in an atom. The negatively charged electrons, however, can move from one atom to another. Ions form when an atom loses or gains electrons. Let's look at this a different way for a minute. You are making a decision, and you are weighing out your pros and cons. The pros are positive, and the cons are negative. You are at a point in your list where you have the same number of pros as cons. This would be the same as how the atom normally occurs.

There are several commonly occurring ions. Let's look at some common anions first. Hydrogen usually has 1 proton and 1 electron. It sometimes gains an electron so that it has 2 electrons and still just 1 proton. It is now an anion named hydride.

There is also an example that you use every morning. You may be familiar with a substance called fluoride. This is found in your toothpaste. Fluoride is when fluorine has gained an electron. Fluorine has 9 protons and electrons until it gains an electron and becomes fluoride with 10 electrons and 9 protons.

Sometimes more than one electron is gained. Nitrogen has a tendency to gain up to 3 electrons to give it a total of 10 electrons, but it still has only the usual 7 protons. This means that the ion has a net charge of -3. The nitrogen ion is now called nitride.

Many positive ions commonly occur, too. Lithium, something that you see in batteries - which are incidentally called lithium ion batteries - usually has 3 protons and electrons. It loses 1 electron and then has a net charge of +1. Unlike with the anions, the name doesn't change when an atom goes from being neutral to being a cation.

Hydrogen is a special case because it gains or looses electrons equally. So in addition to the hydride anion, there is also a hydrogen cation. When hydrogen loses its only electron, then it has a +1 positive charge.

There are also polyatomic ions that contain multiple atoms that are covalently bonded together. An example of a polyatomic ion is NH4 +1.

What Is an Ion?
Related Study Materials

The Death of William Shakespeare: Date & Cause

What Are Capital Resources? - Definition & Examples

What Is a Compound? - Combining Elements with Chemical Bonds

Can You Start a Sentence with Because or However?

How to Find Interior Angles