An oligopoly is characterized by a few firms that have control over the price and output level of a market. Explore the definition and examples of oligopoly, and learn about the impact of a market's oligopolistic behavior on consumers. Updated: 11/03/2021
Create an account

What Is an Oligopoly?

An oligopoly is a market structure where a few, large firms control most of the market. If you think about a monopoly, where a single entity controls the entire market, or perfect competition, where there are many smaller companies selling the same goods and services, we needed to find a happy medium - something between having a store on every corner but not having one brand that rules them all. So, oligopolies were formed. 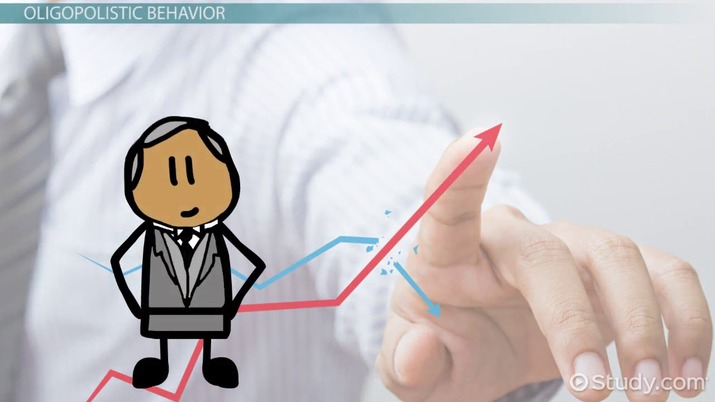 Coming up next: Understanding a Command System in Economics

Once again, to understand how these industry structures work, it's helpful to think about an industry you are familiar with that could be an oligopoly. For our purposes here, let's say if there are three to four companies that control most of the market, it's an oligopoly. Utility companies are often set up as regional monopolies, so they don't help us. Gas stations are closer to perfect competition, so that doesn't provide much insight.

Take a second and think about it: what industry in the United States has three to four companies that essentially rule the market? I bet you thought of a few: maybe oil companies, maybe airlines, maybe public accountants. All excellent examples. For our example, let's use one we are probably all familiar with, and one that constantly shows us how oligopolies behave towards each other and customers: mobile phone providers.

So, in the mobile telephone market, we really have AT&T, Verizon, T-Mobile, and Sprint. There are others in there: StraightTalk, Cricket, U.S. Cellular, and Boost. One of the most important things to remember about an oligopoly is that the big players are not the only players in the market; they just have a significant amount of the market share. If the eight providers I listed above all have about 10% market share, and a few smaller companies made up the rest of the market, we wouldn't have an oligopoly.

But, take a guess at how much market share the top four providers have. What do you think? 50? 65%? 80%? Well, AT&T and Verizon both have about 34% each, so there goes 68% of the pie. T-Mobile has about 16%, and Sprint has about 15%. That means the top four competitors in the mobile phone industry have 99% of the market! Now, next time you hear the Justice Department tell AT&T they can't acquire Sprint, it might make more sense. An AT&T that owned Sprint would have 50% market share!

Why do we care that a few big companies have so much market share? Or, do we? How does it change their behavior as competitors or our behavior as consumers?

First of all, think about the pricing behavior. In a monopoly, if the company raises its prices and you need the product, you have to pay the price. In perfect competition, if a company raises its prices, no one goes there because the same stuff can be bought somewhere else for cheaper. Soon, all the producers have to follow suit to get their customers back. This hypothetical example probably demonstrates most clearly, why, generally speaking, competition is good for consumers.

But what about with an oligopoly? If Verizon offers the newest phone for free and the best plan for cheaper than AT&T, Verizon will pick up market share. Doing so forces AT&T and the other companies to think about their prices. Will Verizon keep prices low for a while, or can the other companies survive the low-price attack of Verizon? Part of the answer to that question, is what will you - the customer - do? If you are with AT&T, close to the end of your contract, do you renew, or jump ship to Verizon?

Or what about when one of the firms, like T-Mobile recently did, introduces a promotion to pay your early termination fee if you become their customer? How should Verizon and AT&T react? As you can see, oligopolies can get very competitive. It highlights the importance of an economic concept you'll learn in another lesson - the idea of game theory, or trying to anticipate your own best move based on the behavior of others.

Oligopolies can be both good and bad for consumers. It may end up in a pricing war, or it may go the direction of price fixing. A price war is when companies just keep lowering their prices to try and force the others out of business. This may sound like a good thing, because consumers get lower prices, but remember - price wars can't last forever. And when they are over, there is less competition… not a good thing for consumers.

The other risk in an oligopolistic market is price fixing. While it's illegal, it's not always easy to see it happening. Price fixing is when the companies agree on a price. Together, they agree on a price, and they all stick to it. If you think about it, this is pretty much a monopoly. That's exactly why the Department of Justice is required to approve all mergers in the United States.

Look around your city - it's a bustling economy of consumers and producers conducting business. Some of those producers have all the power - the monopolies - and some don't have much - those with the most intense competition. But look for the industries in between - look for oligopolies. Observe how they send signals to one another through their marketing - sales, advertisements, or promotions - and watch how consumers react. In many ways, oligopolies are the most common market structure in the United States, so understanding how they influence an economy and consumers - especially you - is an important part of becoming a smart consumer and a budding economist.

What is an Oligopoly? - Definition & Impact on Consumers
Related Study Materials

Oligopoly Characteristics & Examples | What is an Oligopoly?

What is Monopolistic Competition? Examples & Significance

Effects of Prices on Producers and Consumers

Factors that Affect Elasticity of Supply