The best business decisions are the most informed ones. This lesson outlines how leaders can perform a systematic options analysis to better inform their decisions. Updated: 11/08/2021
Create an account

Simply put, options analysis refers to the practice of evaluating every possible pathway that leads to a desired outcome. Options analysis is an important aspect of project management because it helps leaders ensure they have considered all possible routes before choosing the best fit for their project.

For example, in an effort to increase value, legislators in the United States approved a program that would provide incentive money for healthcare facilities to eliminate paper medical records and replace them with an electronic health record (EHR). For the healthcare providers, there was no neutral option. If a provider adopted the electronic health record, they received the incentive; if they failed to do so, their Medicare reimbursements would be subject to a 1% penalty. 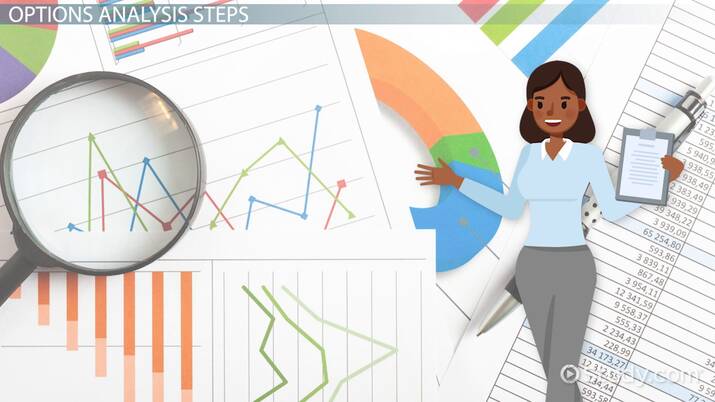 Coming up next: What is a SWOT Analysis?

In the first stage, the assembled options should be recorded with no consideration (yet) about their feasibility. In the paper-to-electronic example, the comprehensive list of options would include things like:

This initial stage allows an unlimited number of options, but there are a few option types that must always be included. The first is what might be called the ''do-nothing'' option. This is a baseline scenario that's a picture of the future without any positive or negative thought to the project. The second mandatory type is the ''do-minimum'' option. That represents the minimum outlay necessary to achieve the deliverable.

Once these two options have been identified, the remaining options are considered ''do-something'' options. These are the options that vary widely in cost and value. They're generally more complex options because there are more variables and dependencies.

In stage two, the feasibility now becomes a consideration. In identifying the options, there was no linear progression, and options were simply tossed onto the table simultaneously. When analyzing feasibility, a more systematic approach is required because the stakes associated with failure have been raised. Failing to properly forecast costs, investment required, or return on investment (ROI) can quickly turn the best option into a nightmare.

At a minimum, a feasibility study must include five components:

In the medical records conversion project, we can certainly rule out closing the clinic altogether as an option. It would not be feasible to reduce revenue by 100% in order to avoid incurring a 2% penalty. The other three options should survive into the third step.

The process transitions from the feasibility study to the selection of an option when all unfeasible ideas have been removed. Selecting one of the remaining alternatives should largely be based on cost-effectiveness. Don't make the mistake of thinking that cost-effective and cheap mean the same thing; the project is being evaluated for value, not just cost. When analyzing the remaining options, although cost is a starting point, a decision should be made only when a matrix has been used to analyze the value proposition and not just the cost.

Of the three remaining options in the conversion project, the cost-benefit analysis will quickly eliminate two. Because incentive money is equal to the cost of purchasing an electronic system, this is the most obvious choice. The value proposition is receiving an electronic record that provides an immediate return on investment without incurring significant costs.

Just before making a selection, it's good practice to assess the financial impact of the option one more time. This is particularly important if parameters or variables have changed during the process. When the most value-adding option has been identified, the project is now ready to begin.

All right, let's now take a moment or two to review. As we learned, an options analysis puts all available options on the table and systematically evaluates them. The process takes place in three steps.

The first step is simply to aggregate all possible options regardless of the likelihood of adoption. At a minimum, the options must include options we can define as:

The second step is to conduct a feasibility study and remove any options that are identified as being unfeasible. All feasible options now survive to the third step where a cost-benefit analysis is performed, a value proposition and ROI are identified, and the final decision is made.

What Is an Options Analysis? Quiz

Once all the options in an options analysis have been identified, the next step is to perform _____ which will look at factors like cost forecasting, available technology, and personnel requirements.

What Is an Options Analysis?
Related Study Materials

Investment vs. Investments in Economics

The Initiation Phase of Project Management

The History of Agile