Copyright
Lesson Transcript
Instructor: Ashley Bishop
'Antigone' is a classic Greek tragedy in many ways, including the fact that its main hero has a tragic flaw. For Antigone, the flaw brings about her demise and serves as a moral lesson for the audience.
Create an account

As the title character, Antigone is the obvious choice as the tragic hero of this play. Like many other tragic figures from Greek drama, she has hamartia, which is a tragic and prominent flaw that brings about her downfall. There is, however, an alternate theory about the hero of Antigone.

Some scholars have argued that Creon, the King of Thebes, is the tragic hero. In this lesson we will explore Antigone's tragic flaw and the possibility of a second tragic hero. 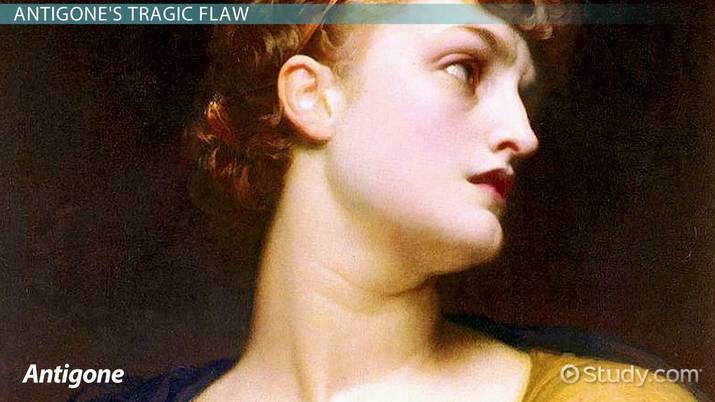 Coming up next: King Creon in Antigone: Character Traits & Quotes

The word 'hamartia' is derived from the Greek word hamartánein, which means to err. As a literary term, it was first identified by Aristotle in his seminal work, The Poetics. Aristotle outlined several critical qualities of tragedy, and chief among them is the tragic hero's flaw. This flaw is often unknown or underestimated by others, and it is the one quality that makes the hero vulnerable.

It's important in the tragic definition of the hamartia that the hero does not acknowledge his or her own flaw. In Antigone, the central character believes that her flaw is her strength, though it is actually her stubborn loyalty.

After Creon discovers that Antigone has defied his command, he questions her. Antigone responds:

'I did not believe your proclamation had such power to enable one who will someday die to override God's ordinances unwritten and secure' (lines 496-499).

Antigone believes that service to the gods and the dead is more important than obeying man's laws:

Antigone's loyalty reveals her profound stubbornness. From the beginning of the play, she's aware of the price for burying her brother. Although her sister Ismene pleads with her to reconsider and accuses her of being 'headstrong', she attempts to bury him anyway (line 53).

If Antigone is the hero, then Creon must be the antagonist! Right? Well, it's a bit more complicated than that. Creon suffers from a hamartia of his own. Like Antigone, he is prideful and stubborn. Despite pleas from his own son, who is engaged to Antigone, to let her go, Creon will not relent until it is too late. In the end he loses his son, who commits suicide upon the news of Antigone's suicide. And his wife also commits suicide.

Creon's stubborn pride creates a storm of destruction, which ultimately ends in Creon's own despair: 'Lead me away, a vain and silly man who killed you, son, and you, too, lady. I did not mean to, but I did' (lines 1413-1415).

The theory that Creon may be the real central tragic hero of this play is due to the unconventionality of a female tragic heroine. Women rarely occupied more than a supporting role in Greek tragedies. Even Aristotle, who would have likely been aware of Sophocles' work, refers to the tragic hero as a male figure. The only reason we have to doubt in this theory is that Creon does not die in the end, though he is 'fallen,' and this play ultimately focuses on Antigone's story.

Although it is unusual for a female character to occupy the Greek tragic hero role, Antigone fits the basic criteria, including her tragic flaw, or the intense vulnerability that would bring about her demise: her stubborn loyalty. Creon's tragic hero-like qualities, including his own tragic flaw, provide an interesting platform for debate about whether he is the actual hero of this play. Although he would fit many of the criteria, we cannot ignore that the crux of this play focuses on the thoughts, actions, and beliefs of Antigone.