From 1600-1750, the Baroque period saw significant social, political, and religious upheaval. The Catholic church sought composers that could create new music to appeal to the masses. Explore the definition, history, characteristics, and composers of the Baroque period, including Bach, Handel, and Monteverdi. Updated: 10/11/2021
Create an account

Baroque music is a heavily ornamented style of music that came out of the Renaissance. While it is often considered to be part of the era of Classical music, it is important to note that Baroque predated the Classical period: the Baroque period lasted from 1600 until 1750, while the Classical period spanned 1750-1820.

The genre gets its name from the Portuguese word for 'broken pearl,' which is a particularly apt way of describing this style of music. Heavily instrumental at both the highest and lowest notes, Baroque music regained popularity in the late 1800s and has been played ever since. 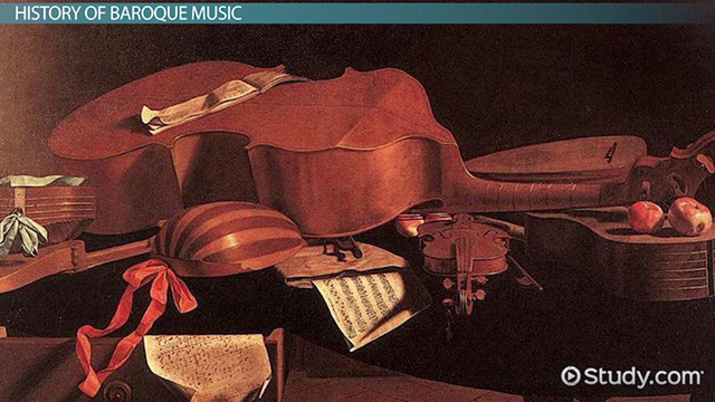 With the great innovations of the Renaissance also came new instruments and new ways of building those instruments. Most notable of these were the pianoforte, a precursor to the modern piano, as well as the truly superior violins built by the Stradivari family. No matter the instrument, a greater span of music was now available, and composers were eager to take advantage of it.

Additionally, 1600 marked a period of social upheaval in Europe. The Roman Catholic Church, once unified in much of Europe, was split by the Protestant Reformation, which created various Protestant denominations throughout Northern Europe. The Catholic Church, seeking to regain its former reach, soon was encouraging musicians and composers to write work that could appeal to the masses.

However, the Baroque period was not merely about religion. Indeed, it was this period of musical history that saw the birth of one of the greatest genres in the Western canon, the opera, which combined music with drama. Other types of composition, such as the concerto, sonata and cantata, were also created during this period.

Truly unlike anything the world had seen up to its creation, Baroque music has many features that help mark a piece as Baroque. Three important features are the focus on upper and lower tones, the focus on layered melodies and the increase in orchestra size.

Some of the most famous composers in history emerged during the Baroque period. Three in particular worthy of note are Bach, Handel and Monteverdi.

Johann Sebastian Bach is easily the most famous composer of the Baroque period and among the most famous of all time. During his life, he was more well regarded as an organist, but has become renowned since then for his work as a composer.

George Frideric Handel wrote his greatest work, Messiah, as a musical counterargument for the Church of England against the Catholic Church. Today, it remains one of the most famous works from the Baroque period and is itself a great example of Baroque work.

Unlike the Protestant Handel, Claudio Monteverdi was a Catholic priest but is primarily remembered for writing some of the first operas in history, not for his religious music. These works drew on the tales of the heroes from Greek and Roman mythology, making them a safe bet in a religiously charged environment.

Much like the malformed pearl from which the style gets its name, Baroque music is ornamentation taken to the extreme. By layering melodies performed at both the upper and lower tones of music, a richness is possible that could, indeed, sound just about heavenly enough to change people's minds about religion. Since then, however, it is best remembered for the operas that opened a whole new style of music to composers.

After absorbing the details of this video lesson, you should find it easy to: