Raymond has earned a bachelor's degree in computer information systems and a master's degree in organizational leadership.

Biometric security devices measure unique characteristics of a person, such as voice pattern, the iris or retina pattern of the eye, or fingerprint patterns. With biometrics, it can be extremely difficult for someone to break into a system.
Create an account

Biometric security devices play a crucial role in verifying a person's identity by enforcing access control methods through their unique biological traits. In this lesson, we will cover optical, fingerprint, and voice recognition, which are used to identify and authenticate a person, as well as cover the pros and cons of using these devices. 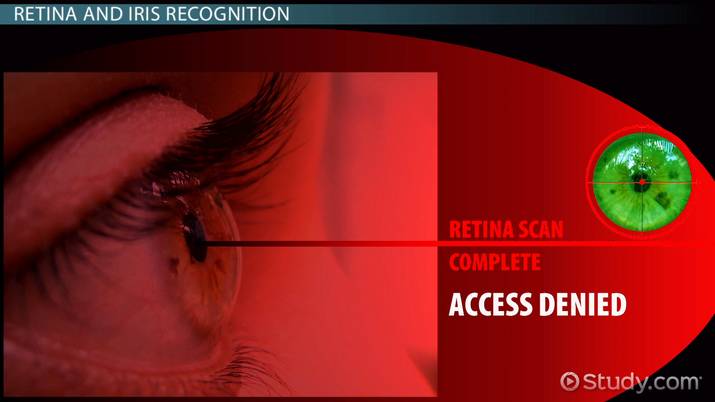 Coming up next: What Is Configuration Management? - Definition, Process & Tools

Retina scanners use the blood vessels in the back of the eye for authentication. The blood vessel pattern in the back of the eye is unique to the individual. This method is very intrusive and is not widely accepted because it breaches a person's medical privacy. For example, possible discovery of disease in the eye or other medical conditions may alert the company and can cause employment issues.

The iris scanner, which measures an individual's iris pattern, is non-intrusive. Each person has a different color pattern in the iris, and therefore, the iris scanner is used to measure these characteristics. It is more popular within the security field.

A good way to remember that the retina scanner is the more intrusive of the two when it comes to medical privacy is: RetINa is INtrusive.

Although it is uncomplicated and inexpensive to implement, there are high chances for replay attacks since this type of system allows for easy impersonation. For example, if you press your thumb against the back of a gummy bear, you will be able to see your thumb print. The same gummy bear with the lifted fingerprint can now be used to fool a fingerprint scanner and gain unauthorized access.

Voice pattern analysis measures the tone and pitch in a person's voice. The person who registers his or her voice is given an odd phrase to repeat several times in order to allow the voice recognition software to capture the authentication. For example, a person completing a voice registration process may have to say something like this - 'blue mountains and teeny tiny strawberries.' Can you tell that there are several tones and pitches used in this sentence?

In this lesson, we learned about biometric security devices, which verify a person's identity by enforcing access control methods through their unique biological traits. We also learned about replay attacks (also known as a playback attack), which are when a person uses someone else's credentials without their permission.

We learned that fingerprint scanners are the most popular, easiest to implement, and cheapest biometric device because they only measure the fingerprint. The chances of replay attacks on fingerprint scanners are very high, and this system can be fooled. Although voice pattern analysis, which measures the tone and pitch in a person's voice is pretty good, a person who is sick or has a strained voice may not be able to authenticate.

Finally, remember that the retina scanner, which uses the blood vessels in the back of the eye for authentication, is intrusive and can give away someone's medical condition. The iris scanner, which measures an individual's iris pattern, on the other hand, is very secure and does not give away a person's medical status. Both eye recognition devices are expensive to implement but at the same time, the chances of replay attacks are very low.

Types of Attacks in Network Security

What is a Denial of Service (DoS) Attack? - Definition, Types & Examples

What is Malware? - Definition, Examples & Types