Blue biotechnology is the use of biological methods and technology on aquatic organisms to gain knowledge or benefits. Explore examples of blue biotechnology applications on humans, animals, and the environment. Updated: 01/19/2022
Create an account

You may not realize it, but many of the products and services that you use on a daily basis are the result of biotechnology. Simply put, this is biology-based technology. Things like plastics, food and beverages, fabrics, medicines, and even personal care products are derived from or use living organisms. Blue biotechnology is biotechnology using aquatic organisms—think ''blue'' for the water that these organisms live in. We already utilize many aquatic resources such as fish, shellfish, sponges, and petroleum reserves. But blue biotechnology goes beyond this, utilizing an incredible variety of organisms from Earth's oceans, lakes, rivers, and streams for many different purposes. 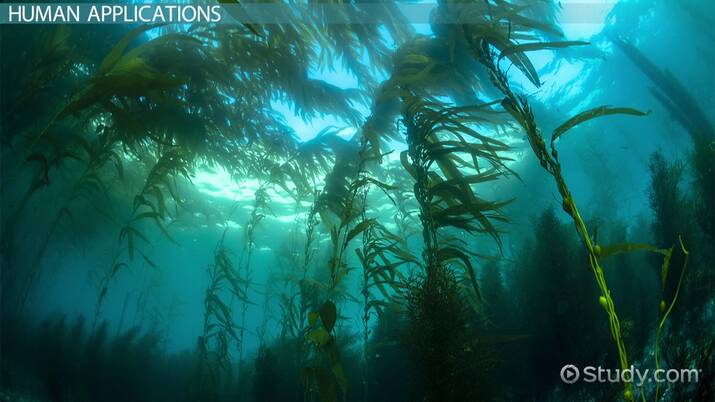 Coming up next: What is a Tidal Bore? - Definition, Cause & Wave

Many painkillers that are commonly prescribed have the unfortunate side effect of drowsiness. They also tend to slow down your body in general, such as your respiration. A substance called ziconotide, which comes from the venom of cone snails, may prove to be a better alternative.

Ziconotide works as a painkiller that, when injected directly into your spinal cord, is both far more powerful than morphine and also only acts in specific regions of the spinal cord. This means that unlike other painkillers, it doesn't affect your entire nervous system and doesn't cause drowsiness. And like many other blue biotechnologies, ziconotide can also be created synthetically.

In addition to medical products, blue biotechnology can also be used for cosmetic products. Take for example a company that makes cosmetics from algae known as sugar kelp. They grow, harvest, and ferment the algae, extracting a variety of things such as minerals, sugars, and iodine, and create products, including perfumes and facial and body care products.

Algae has a variety of other applications as well. It's a food source for both people and fish. It's used in antibacterial, antiviral, and antifungal treatments. It's a source of biofuel, and it's even being researched as a possible contraceptive.

Though you might think that jellyfish are only good for stinging, they have proven to be quite useful in blue biotechnology. For example, the luminescent properties of the species of jellyfish Aequorea victoria is being used to help map neurons in the human brain. Your brain is a complex web of neural connections, and being able to identify which connections go where can help researchers better understand diseases that involve problems in this ''wiring.''

Jellyfish are also being used to create a source of medical-grade collagen, which can be used to treat bones and wounds. Using jellyfish is more cost effective and is less controversial than other sources of collagen, such as from mammals.

Humans aren't the only ones that can benefit from blue biotechnology. Aquatic animals can also reap some rewards from their fellow underwater residents. For example, blue biotechnology plays a major role in aquaculture, or fish farming. High-quality fish foods, disease resistance, species diversification, and even environmental impact are all aspects of aquaculture that involve blue biotechnology.

Blue biotechnology can also be useful for environmental and waste management. Specifically, there are organisms that produce eco-friendly substances as well as organisms that absorb harmful toxins and chemicals. Utilizing these organisms may prove helpful with clean water initiatives and clean-ups. A good example of this is the Deepwater Horizon oil spill in the Gulf of Mexico in 2010. Oil-eating microbes were deployed to help clean up the oil, chomping away and removing quite a bit of oil from the water.

All right, let's take a moment to review. We learned that biotechnology, or biology-based technology, is a major part of our everyday lives. We use many products that both come directly from and are based off of living organisms.

Blue biotechnology specifically utilizes aquatic organisms and has numerous applications, including medicine, cosmetics and personal care products, wound treatment, waste clean-up, aquaculture (as in fish farming), and even brain mapping, just to name a few. Blue biotechnology is not new, but it is adaptive and flexible, making it applicable even today. So the next time you use a product that came from blue biotechnology, don't forget to thank the organisms that helped create it!

What is Bioprospecting? - Definition & Examples

Cloning Types & Examples | What is Cloning?

Cloning Plants Overview & Methods | How to Clone a Plant

Nuclease & Exonuclease Enzyme Function & Activity | What Is a Nuclease?