View bio
Catharsis is when literature or drama provides strong emotional experiences that result in a sense of purification or emotional cleansing. Discover Aristotle's definition of catharsis plus examples and connections between catharsis and tragedy (Oedipus the King, Romeo and Juliet), catharsis and comedy (The Catcher in the Rye), and catharsis and Romanticism (Lord Byron). Updated: 08/26/2021
Create an account

Confession: Sometimes I like to watch a movie or read a book that I know is going to make me cry. While often characterized as a particularly female type of behavior, I've had more than one male friend tell me they bawled their eyes out while watching the sappy, romantic film The Notebook. It's a fact; moviegoers like to cry into their popcorn from time-to-time.

Why do we seek out literature and other entertainment that makes us so sad? It seems like crying is something we would like to avoid if we could, but instead, we feel kind of good and refreshed afterwards.

Aristotle called this kind of experience catharsis - when literature provides strong emotional experiences that ultimately result in a sense of purification. Like a toddler playing quietly after a tantrum, tragedy (and comedy) can make us feel cleansed of emotions.

While Aristotle was speaking specifically about catharsis and theater, we know that all types of art can make us feel deeply, from Shakespeare's tragedies to blockbuster movies to the vivid paintings of Marc Rothko. We seek those feelings out because they make us feel good in the end, even if they make us feel sad first. 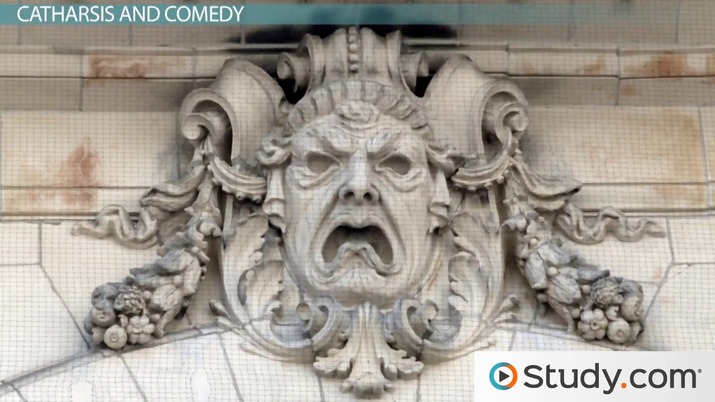 Coming up next: Allegory in Literature: History, Definition & Examples

Aristotle defines a tragedy as a complete story featuring high-stakes situations. Tragedy must also be told through pleasing language and performed onstage rather than read. Finally, 'through pity and fear,' the audience should leave feeling cleansed emotionally (catharsis). That's one tall order, Aristotle.

Aristotle considered Oedipus the King by Greek playwright Sophocles to be a tragedy that had it all. First performed around 429 B.C., Oedipus the King is as high stakes as it gets. King Oedipus seeks the advice of a prophet who says he must find the man who killed the previous king, King Laius, at a crossroads. Closer inspection into Laius' killing, though, reveals that - whoops! - Oedipus also killed a man at a crossroads.

Eventually, Oedipus figures out he was the one who killed Laius and that Laius was his father. Since Oedipus' wife, Jocasta, is Laius' widow, it is revealed that she is both Oedipus' wife and his mom. High-stakes situation, indeed.

Then, if that wasn't enough, the audience watches as Jocasta kills herself and Oedipus pokes out his own eyes. It's enough to make you feel both pity and fear, especially as you watch these scenes performed onstage. It was the Ancient Greek equivalent of watching an Oscar-winning drama.

Classical Greek drama from Sophocles and other Ancient Greek and Roman playwrights set the stage, so to speak, for Shakespeare's tragedies of the Elizabethan era (1558-1603). Hamlet, King Lear, Macbeth, and Romeo and Juliet are some of his best-known examples. Like Oedipus the King, they contain high-stakes plots, typically resulting in the deaths of at least four characters per play.

I'm always struck by how deeply I care about Romeo and Juliet every time I see it performed, even though I already know how it is going to end (and that the characters aren't real people). Like me, by the end of a tragedy like Romeo and Juliet, the audience has been through an emotional journey that leaves them feeling different from when the play began.

Catharsis is often linked with tragedy, but a good cry isn't the only way to feel emotionally cleansed. When choosing a movie or a genre of music after a hard day, we pick something we think will lighten our mood. Often set in opposition to tragedy, comedy represents the other end of the emotional spectrum. While comedic literature doesn't make us feel 'pity and fear,' that doesn't mean we can't be changed by the experience.

Often, catharsis in comedy relies on the audience's identification with the main character. When a character in a romantic comedy is embarrassed in front of their crush, we can laugh and cringe at their all-too-familiar experience from a safe distance.

The reason why the novel The Catcher in the Rye by J.D. Salinger is so well-liked by the high school students who read it is because they can see themselves (or part of themselves) in the anti-hero Holden Caulfield.

'Kicked out yet of another school,' Holden says, 'I got the ax. They give guys the ax quite frequently at Pencey. It has a very good academic rating, Pencey. It really does.'

Holden uses humor to make fun of his private prep school's policies. It is catharsis tailored to fifteen-year-olds, who are likely reading The Catcher in the Rye while sitting in a high school classroom. The humor allows for the purging of the frustrations and limitations of adolescence without having to actually be kicked out school for the fourth time.

Romanticism was a literary movement which began in the late 18th century, focused on the unfettered expression of emotion. Romantic poet William Wordsworth even described poetry as, 'The spontaneous overflow of powerful feelings.'

It's important to note that Romanticism with a capital R differs from the hearts and chocolates romance with a lowercase r. Romanticism dealt with many different powerful emotions, love being just one of them. Romanticism, after all, gave us Mary Shelley's dark and unromantic novel Frankenstein.

Through Romanticism's many feeling-filled, semi-autobiographical poems and novels, the recipient of the emotional purging of the catharsis shifted from the audience to the writer himself (or herself). The Romantic movement included poets and novelists alike, including William Blake, Samuel Taylor Coleridge, Percy Shelley, Mary Shelley and John Keates.

Romantic poet Lord Byron was known for his 'Byronic hero,' a character we recognize today as the dark and brooding artist character who all the girls seem to fall for: 'That man of loneliness and mystery/ Scarce seen to smile, and seldom heard to sigh.'

That was just one description of a Byronic hero, the pirate Conrad, as described by Byron in the poem The Corsair from 1814. (Today, the character would be a vampire and/or painter and not a pirate, but you know the type). One theory is that, instead of purging the audience's emotions, Byron found a way to initiate his own very personal catharsis by writing about himself and his 'issues.' For Byron, poetry became a way to purge a few of his many bad-boy feelings.

Catharsis is the use of strong feelings in literature to engage the reader in a type of emotional purification. Often, tragedies like Romeo and Juliet, Hamlet and Oedipus the King are high-stakes and emotionally powerful enough to leave the audience feeling purged of those emotions by the end of the play. Comedies can also provide the reader or audience with a way to feel uncomfortable emotions at a safe distance. Finally, the Romanticism literary movement provides examples of how literature can go one step further, allowing catharsis for the writers themselves.

1. In the lesson, some tragic plays from past eras were discussed. Choose a tragedy from either Classical Greek theater or the theater of the Early Modern period to read. Then think of a contemporary play or film in the genre of tragedy. Compare the two in regard to the process of catharsis. Include something about the impact of the cultural time period in which the two plays were written and performed.

2. Write about a favorite comedy film or episode of a television show. Explain in your essay why you find the story humorous. How does catharsis take place for you when you watch this story? Or perhaps you can't feel a sense of catharsis even though you laugh at the film or show. If this is the case, why might this be the case?

3. Catharsis can be achieved by the writer in some instances, as you read about the Romantic Era authors in the lesson. Write a poem or flash fiction of your own, choosing a subject that raises strong emotions for you. Then write a brief exploration of your own experience of catharsis as a writer.

4. Read Shakespeare's Romeo and Juliet and then watch a film version of the play. Write an essay comparing and contrasting the two media from the perspective of providing catharsis for the audience members. Is there a difference in the experience of reading versus watching?

What is Catharsis? - Definition, Examples & History in Literature and Drama
Related Study Materials