Chain migration is a major factor in cultural integration. Discover the definition of chain migration and explore examples of each level, with a look at the dangerous assumptions and politics surrounding the concept. Updated: 01/05/2022
Create an account

As kids, we played various versions of follow-the-leader. In some games, you have to do what the leader does, hopping or cartwheeling or walking backwards. In others, you are physically connected by holding hands, following the leader on a spiraling chase. In any form, one leader is responsible for pulling a dozen people from one location to the next. Congrats - you just mastered chain migration. Sort of.

In social sciences, a chain migration is one in which a population migrates (or immigrates) from one location to the next, then continually brings people from their home to this new place. In theory, there is a chain of people constantly moving from place to place, supported by the people who migrated before them. It's one of the biggest games of follow-the-leader a person can ever play. 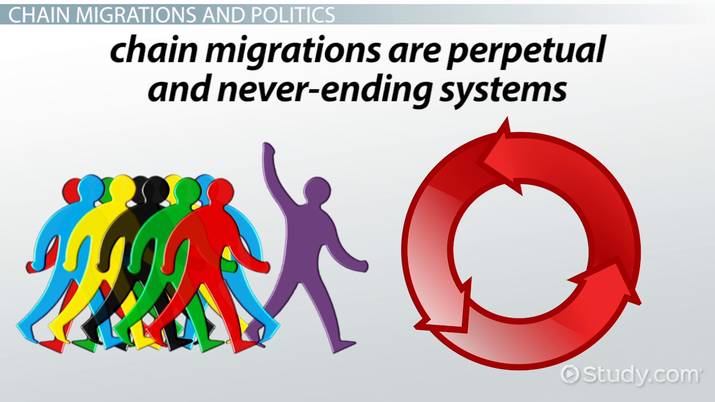 Chain migration can occur on a number of levels. At the most basic level, it refers to the movement of populations between cities. Now, all migrations (or movements of human populations) are motivated by a combination of push and pull factors.

Imagine this scenario: It's the mid-19th century and times are tough in England. The economy isn't great in the countryside, and so people from a small village want to leave and try something new. But what?

First, a few families move from their rural village to London. Those families do well, and help extended family members and friends move to London as well. Those migrants become settled, and encourage other people from their small village to migrate. Most likely the first group to migrate will send money back to family in the village to help them move, and will use the networks they've established in the city to help find the newcomers jobs. Over time, that community moves from one place to another.

The same theory is applied on an international scale. Now imagine that times are tough in northern Mexico. A series of adult workers get visas to work in the United States because the economy is stronger there, and over time, make enough money to bring over the rest of their families. The concept of the chain migration is the same in this scenario, but now we're pulling communities across international borders. In both cases, chain migrations result in a clustering effect, where people from a shared point of origin end up very close to each other in the new location.

Both of these scenarios are based on actual historical events. Migrations of this nature have occurred throughout history. However, the concept of a chain migration as used by social scientists is not always the same as the concept used by everyone else.

In today's world, the term 'chain migration' has become extremely politicized. In the United States specifically, it refers almost exclusively to large events of immigration. This understanding of chain migrations relies on a few assumptions:

People use the concept of a chain migration to support anti-immigration policies and agendas, under the assumption that entire communities will move from a foreign country and into the United States, thus replacing American culture with their own. While chain migrations do occur in the sense that established communities provide incentive for extended family members and friends to migrate, this politicized version of chain migration has never been proven to be accurate.

In fact, researchers have continually demonstrated that chain migrations, where they do exist, are limited in size and scale and have no direct correlation to a group's ability or desire to participate in American culture. In fact, most social scientists still only use the term ''chain migration'' to refer to the movement of people between cities within the same nation, not across national borders. It certainly is a massive game of follow-the-leader, but like all games, eventually it comes to an end.

This idea can be applied on local and international scales but lately has become a very politicized term referring to immigration. In this use, chain migration is a pejorative term, used to describe never-ending and growing waves of migrants that will eventually replace a local culture with a foreign one. Social scientists do not support this theory. Chain migration for us is simply a pattern of movement between communities, like a giant game of follow-the-leader.

Gully & Rill Overview & Formation | What is a Gully?

The Changing Role of Women in Food Consumption & Production

Nomad Types, Facts & Examples | What is a Nomad?