Chemiosmosis is a process wherein a molecule progresses from high to low concentration based on its charge and the surrounding concentration. Explore the process of diffusion's role in how chemiosmosis occurs, and understand its importance in different bodily functions. Updated: 10/15/2021
Create an account

Chemiosmosis is the process of a molecule moving from high to low concentration, based on its charge and concentration inside a cell. This sounds pretty complicated. So, before talking about chemiosmosis, it will be important to understand a basic rule of the world: diffusion.

There are many more examples, such as delicious smells wafting from the kitchen during a holiday meal or warm air moving outwards from the house during the winter. The examples are so ubiquitous because diffusion is everywhere! Everything always moves from where there is more to where there is less. Check out the pictures of food coloring diffusing through a beaker of water. 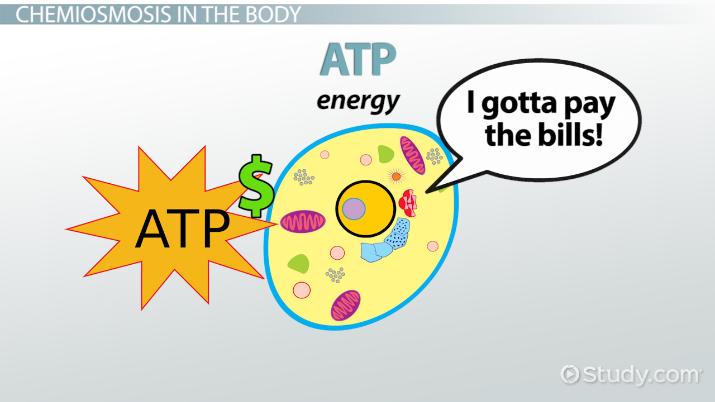 How Does Diffusion Happen in Cells?

There are some special examples of diffusion that occur inside cells. Cells have a plasma membrane, or outer barrier, that only lets certain things in or out. This allows substances to build up on one side of the membrane if there isn't a door to let them through. This creates what we call a gradient. A gradient is a situation in which there is more of a substance on one side than another. Energy can be stored in a gradient over the plasma membrane. If one substance is concentrated on one side of the membrane, it will want to diffuse until the concentrations are even.

Because this process occurs naturally, when it finally does happen, energy is released. The cell can harness this energy to do amazing things. Channel proteins allow substances to diffuse through the plasma membrane. Notice there are more of the blue circles outside the cell, so by diffusion they move into the cell.

How Does Chemiosmosis Work?

Diffusion not only works to equalize concentration on both sides of the membrane, but also to equalize charge. If there are more positive ions outside compared to inside the cell, positive ions will want to move down their electrical gradient into the cell. However, chemiosmosis also takes into consideration the concentration gradient. The molecule flows based on where there is more of its charge to where there is less and from a higher to lower concentration. The ion is flowing down its electrochemical gradient.

Chemiosmosis in the Body

All cells need energy, called ATP. Think of ATP as money. Each cell needs so much money to pay the bills every month, so just like people, they need to make money. The way the cell does this is through a process called cellular respiration, which starts with ingesting food and ends with making ATP.

The only way to let hydrogen back into the cell is through a protein called ATP synthase. The hydrogen ions flow through the protein, causing it to spin like a water mill. The wheel of the mill is the ATP synthase, and the water flowing down it is the hydrogen ions. The ATP synthase then harvests the energy stored in the electrochemical gradient to make ATP, just like the water mill takes the energy from the flowing water to make the wheel turn. The body is converting one kind of energy into another.

Think about the water wheel. The water pours down its concentration gradient, high to low, making the wheel spin. The energy from the water flowing is converted to energy to spin the wheel.

In summary, chemiosmosis is the process of a charged particle moving down its gradient based on the concentration and the charge of the ion. Chemiosmosis relies on the principle of diffusion, which says that everything always flows from where there is more to where there is less until an equilibrium, or balance, has been reached. Chemiosmosis involves both ions moving with their concentration gradient and their electrical gradient. An example of chemiosmosis in the cell is the hydrogen ion gradient used by ATP synthase to create cellular energy, or ATP. Hydrogen ions flow from outside the cell to inside, and the energy released is harnessed by ATP synthase to make ATP.

NADPH Structure & Function | What Is NADPH?

MPF in the Cell Cycle: Overview & Importance | What is MPF?

Endotoxin Overview & Examples | What is an Endotoxin?