Shoshana has taught all grades with an emphasis in science and has a master's degree in science.

View bio
Chemistry is a branch of science that studies what everything is made of and how it works. Cooking and making ice are chemistry as well as medicines and paint. How does chemistry work and what does a chemist do? Find out in this lesson. Updated: 08/31/2021
Create an account

Why does a cake rise in the oven? What are fireworks made from? How does my stomach digest food? How does gasoline make an engine run? What is the proper way to describe hot and cold? What creates the shape of a snowflake? These questions and many more are answered with chemistry, the study of the make-up of all things and how they behave. 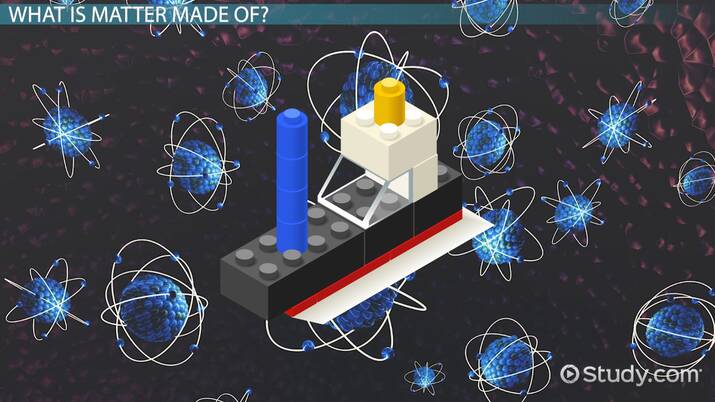 Coming up next: The Periodic Table Lesson for Kids: Structure & Uses

What Is Matter Made Of?

So what is matter made of? Have you ever torn up a piece of paper? How small can you tear it? If you could keep dividing up that paper into pieces so small they could not even be seen with a microscope, you would get down to the very smallest possible particle that could not divide any further.

That smallest particle is called an atom. An atom represents a specific element, like hydrogen or oxygen or carbon. There are less than 100 natural elements that make up all matter in the universe in different combinations. In fact, paper contains hydrogen, oxygen, and carbon.

Maybe you've built something with Legos? Matter is made from atoms kind of like you might make something with building blocks. Some blocks are different sizes, colors, or have a different number of pegs for attaching.

Atoms are the building blocks of matter, and an atom of each element is different. Molecules are combinations of atoms. When hydrogen, oxygen, and carbon atoms are combined in a very specific way, you have a molecule of paper. If it's combined in a different way, you might get sugar—that's how chemistry works.

How Is Chemistry Used?

So how is chemistry used? Think about an ice cube. It is a solid and when you put it in liquid water it floats. Even though it's still water, the arrangement of molecules in ice are different. Changing from solid to liquid or liquid to gas is called a physical change.

A chemical change, on the other hand, means the atoms have rearranged to make a new substance. If a piece of paper gets burned, it's no longer paper, but smoke and ash. That's a chemical change.

Chemists observe and create chemical changes to make new substances. Chemists make things like medicine, cleaning products, food preservatives, fertilizers, chemicals to start a fire and chemicals to put out a fire, paints, glues, and even things like flavors in your favorite gum or soda. Chemistry can sometimes cause problems like making something that is a poison, but it can also fix many problems like killing germs or making clean water.

Chemistry is the study of the make-up of all things and how they behave. It's based on the study of matter, which is what makes up everything in the universe and on Earth. Matter is made of atoms, the smallest part of something, and molecules, and each atom of a different element is different, like how oxygen is different from carbon. Atoms combine in different ways to form molecules, and when atoms rearrange it's called a chemical change. Chemists observe and create chemical changes to make new substances or to make solutions to problems.

This activity will help you assess your knowledge of the branch of science known as chemistry.

True | False 1. Salt particles dissolving in water is an example of chemical change.

True | False 2. Dark matter is anything that occupies space and has mass.

True | False 3. The visible light emitted by the Sun is an example of matter.

True | False 5. A molecule is a particle made up of two or more atoms that are chemically combined.

True | False 6. Artificial elements are those elements that have been produced by nature without the intervention of man.

True | False 7. The melting of ice cream is an example of physical change.

True | False 8. Chemistry is the branch of science that deals with the composition and constitution of substances and the changes that they undergo.

True | False 9. The digestion of food inside the stomach is a type of chemical change.

True | False 10. A molecule is the smallest unit of matter that forms a chemical element.

What Is Chemistry? - Lesson for Kids
Related Study Materials