Child abuse involves actions that represent a threat to a child's physical, emotional, or sexual safety. Take a closer look at the definition and facts of child abuse and learn about its different types, including neglect, physical, sexual, and emotional abuse, among others. Updated: 12/29/2021
Create an account

In America, there are over 3.3 million reports of child abuse allegations every year. What constitutes child abuse and neglect varies for each state, though all state laws have to meet the minimum requirements as set forth by federal law. The Federal Child Abuse Prevention and Treatment Act (CAPTA), as amended by the CAPTA Reauthorization Act of 2010, defines child abuse as the following: 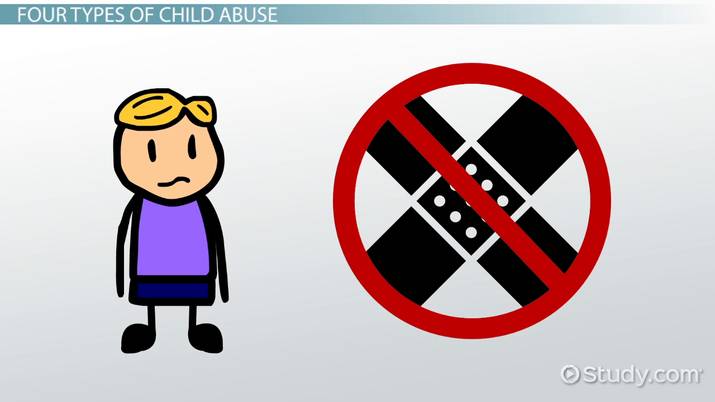 Coming up next: Best Interest of the Child: Standard & Factors

There are four major types of child maltreatment that are recognized in most states:

First, let's discuss physical abuse, which is any physical injury that's caused by a parent, caregiver, or some other person that is responsible for the child; and a result of punching, stabbing, burning, shaking, hitting (whether it be hitting with a hand or using some other object), etc. Spanking and other forms of physical discipline are not forms of child abuse, as many believe that in those cases the child does not receive bodily injury and the discipline is reasonable.

Sexual abuse refers to the parent, guardian, or some other responsible caregiver coercing the child to engage in sexual behaviors, including exploiting a child sexually, molestation, incest, forced prostitution, sodomy, and touching a child's private areas.

Emotional abuse, also known as psychological abuse, refers to behaviors that have a negative influence on the child's self-worth or emotional development. Emotional abuse may include withholding love until your child behaves in an 'appropriate' manner, constantly criticizing your child, or threatening your child.

Other Types of Abuse

Though these are not as widely accepted as the four we mentioned, some states also identify the following two forms of child abuse and neglect:

Substance abuse, which includes exposure in utero to substances in cases where the mother used substances and drugs during pregnancy, creating meth while a child is present or under your care, selling or distributing substances to child, and being under the influence while taking care of a child to the point where you are unable to care for the child

It's important to note that any one of the types of child abuse can occur alone, though it's more common for there to be a combination of abuses, both physical abuse and neglect, occurring simultaneously.

Each state is responsible for determining what constitutes as child abuse while following the minimum guidelines set forth by federal legislation. Physical abuse, physical harm by a caregiver; sexual abuse, coercing a child into sexual behaviors; neglect, failure to care for basic needs; emotional abuse, psychological abuse; abandonment, leaving a child without supervision; and substance abuse, exposing a child to or being under the influences of substances which hinder care, are all forms of child abuse.

When this lesson is concluded, students will have the confidence to:

History of Nigeria: Lesson for Kids