Angela holds a master of fine arts in poetry and has also studied education and creative writing. She has more than a decade of experience as a researcher, editor, and educator in English, writing, and academic research.

Cailin received her MA in English specializing in Cultural Studies from Kansas State University. She has two years of teaching and tutoring experience at the university level.

When we think of a children's story today, we probably think of it as entertainment, rather than as a tool for moral instruction. children's literature includes books, poems, and plays meant for children. Even though the genre is defined by its audience, children and adults alike enjoy stories intended for children. Let's delve back into history and see what we can learn about its many forms and purposes. 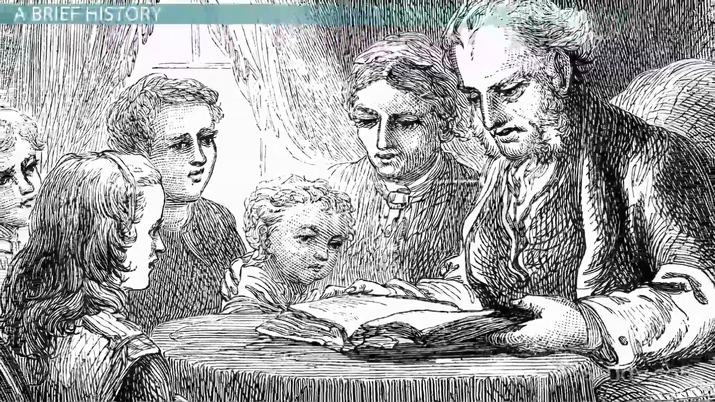 Coming up next: What is the Present Tense? - Examples & Overview

Due to its oral tradition, it's difficult to trace the origin of the first children's story. Because many cultures viewed children as people already on their way to adulthood, they didn't perceive childhood as its own sacred time that they should value for its experience; rather, it was about preparation. Prior to the mid-19th century, children's stories consisted mainly of moral principles and/or realistic perspectives of the world. Let's look at a few of the primary highlights from the past, particularly during the golden age of the genre, where children's literature moved into the realm of entertainment for all ages.

A crucial time for many new developments, the Renaissance saw the development of the first movable printing press, which paved the way for faster and more diverse publication. Some children's literature existed at this time, but it was primarily in the form of textbooks or books for moral instruction, such as Foxe's Book of Martyrs and The Pilgrim's Progress. Even these examples were not originally written with children in mind, but rather children were drawn to the adventures and images in them.

During the time of the rise of Puritanism, John Locke's philosophies on the mind of a child as a blank slate became extremely popular, thus beginning the evolution of seeing the child in a different life stage than an adult and the progression of childhood as we know it today. Parents became more concerned about the mental, and especially the spiritual, minds of their children. If writers did write with children in mind, it was frequently to use Hell or other punishments to scare them into obedience.

One early form of literature children had access to was the chapbook, a small, saddle-stapled book that usually included a fairy tale, poems, and almanacs. This type of book was also much more affordable for the common layperson. The first tales of Jack, the giant, and the beanstalk were printed in this fashion in the late 18th century. Interestingly, when we look at past we can see that the popularity and production level of children's literature were directly proportional to the development of philosophies and/or theories about children and childhood.

The 19th century is considered the golden age of the genre, but what occurred socially in order for this to be possible? The answer? John Newbery, who you may be familiar with given the popular award for children's books today, the John Newbery Medal, that is named after him. Newbery created Newbery's Pretty Pocket Book in 1744, which was the first multi-media book meant for both children's enjoyment and enrichment. Moreover, he fully developed the children's side of his publishing house so that it printed even more books for children.

as society grew to respect childhood more, which can be partially attributed to the growing middle class and the amenities the Industrial Revolution provided, children's literature absolutely blossomed! Writers such as Lewis Carroll and his Alice's Adventures in Wonderland, Robert Louis Stevenson and his Treasure Island, and Mark Twain and his Huckleberry Finn moved away from the strict moralism of earlier productions and turned instead to writing imaginative pieces to entertain. Notably, though, the literature of this period did still reinforce stereotypical gender roles. For instance, we see in Little Women by Louisa May Alcott a heroine who, while embracing her independence briefly, does still marry and grow into a submissive wife.

Today, however, children's literature is more expansive and diverse than at any other time throughout history. Changes in technology and even more modern amenities and luxuries have birthed a greater level of entertainment. We now have children's literature that encompasses many genres in and of itself, from historical fiction to fantasy to science fiction. As such, toddlers enjoy pop-up books, pre-teens have early readers, and teenagers immerse themselves in graphic novels. The literature has also developed immensely in its topic selection - what once only existed for moral development now exists to explore any number of subjects ranging from environment preservation to technological innovation to sexual orientation.

As previously mentioned, prior to the mid-19th century, writers created literature for children that was moralistic. In other words, it imparted to children the values of the elders in a given society. These lessons would have centered on proper behavior, how to respect adults, and how to behave in school; they were essentially books on manners and morals designed to protect a child from an end in damnation.

As attitudes toward children changed, and as the middle class expanded and more people began to read, children began to enjoy reading, and adults began to desire to create a market for children's literature. Children first started to read books about exotic adventures, such as Treasure Island, that were originally written for adults, but then adults began writing specifically for the enjoyment of children. Mark Twain was one of the front-runners of those writers who would write about children for children, telling of their adventures, big and small!

Contemporary themes are about as diverse as anything can get. What children once read to instill fear, such as Foxe's Book of Martyrs, children now read to become immersed in a variety of different imaginary worlds. Other popular themes found in children's literature today include coming of age, the ups and downs of education, friendship, social clubs of one sort or another, and mysteries, among many, many others.

Since children's literature is so broad and varied, let's take a look at one representative example from three different time periods: pre-golden age, the golden age, and contemporary literature.

Probably the most famous example from the pre-golden age time period, and one that is still loved today, would be The Fables of Æsop. Originally published in 1474, this book was one of the first to be printed. Interestingly enough, the collector of these tales, Sir Roger L'Estrange, included a section of discussions that elaborated on the morals of the tales. This was in keeping with the values of the times because parents perceived these stories as acceptable for children since they taught them morals.

A trendsetter for the golden age and many of the writers in it was George MacDonald. One of his most famous books, The Princess and the Goblin, showcases the fantasy and magical elements we would later see in writers such as C.S. Lewis and Madeleine L'Engle. In the novel, underground goblins strategize to kidnap eight-year-old Princess Irene and marry her to the goblin prince, Harelip, so they can force the humans above ground into submission. This is truly a departure from previous stories that primarily focused on moral training.

Today, one of the most popular book series in contemporary children's literature is the Harry Potter series, written by J. K. Rowling, and which actually has fans of all ages. These books follow the title character Harry Potter as he grows up and experiences all types of challenges, from the everyday problems of contemporary children to the fantastical problems of a wizard in training.

As we've seen, children's literature from before the golden age up to contemporary times has largely showcased fantasy and has provided children with an outlet to explore magical landscapes and exotic destinations in their imaginations.

Children's literature includes books, poems, and plays, and has seen a few different movements in the past few hundred years, as reflected in the transitions from the pre-golden age to contemporary trends. These transitions saw children's literature develop from a tradition focused on teaching moral principles to one focused on a variety of topics and modern concerns, though fantasy and fantastical worlds have almost always been a major component of the genre. What was once not even considered a proper genre has blossomed into a collection of works that value childhood and the development of a child's imagination!

Write a story that teaches children a moral lesson. What lesson might be valuable for children to learn? How do we typically learn lessons from literature?

Brainstorm an example of children's literature you know well and write a short 5-paragraph explanatory essay detailing how you know your example is "for children." When planning your response, pay close attention to the main characters, the setting, and the themes your example explores. How do they relate to children? What roles do children play in the text?

What Is Explicit Learning? - Processes & Strategies