Lesson Transcript
Instructor: Gail Marsella
Chromatography is the manipulation of compounds using chemical changes to separate the elements within. Discover the different types, and the basics of practicing this method. Updated: 09/22/2021
Create an account

A Mixture of Colors

In the early 1900s, a Russian botanist named Mikhail Tswett became interested in the individual chemical compounds in plants. He noted that mixing ground-up plant material extracts with different solvents produced different colored solutions. One of his experiments involved pouring a plant extract through a glass tube packed with powdered calcium carbonate. As the liquid passed through the solid powder, bands of color appeared; these were the individual compounds, separated from each other by the interaction of the solid (which remained fixed in the tube) and the liquid extract (which flowed through the tube and out the other end). Tswett had invented chromatography, a word he derived from the Greek words for color (chroma) and writing (graphe).

Since then, chromatography has become a cornerstone of separation science, that branch of chemistry devoted to separating compounds from mixtures. There are two main categories of chromatography: preparative and analytical.

Analytical work (which may be used in an environmental lab to look for pollutants) uses small sample sizes, and the objective is to separate compounds in order to identify them. Preparative work (which may be used in the pharmaceutical industry) uses large quantities of samples and collects the output in bulk, and the point of the chromatography here is to remove impurities from a commercial product. 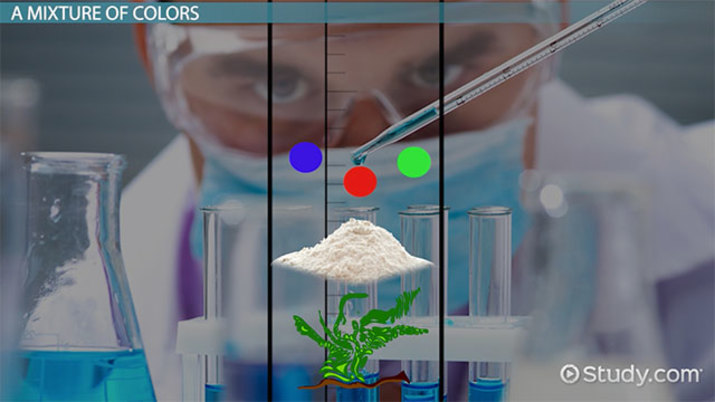 Try it now
Back
Coming up next: The Atom

In any chromatographic technique, a stationary phase usually a solid, thick liquid, or bonded coating that stays fixed in one place, and a mobile phase or eluent (usually a liquid or gas) that moves through it or across it.

In a well-designed chromatography process, the chemist will choose stationary and mobile phases that will both have at least some interaction with the analytes. Any individual sample molecule will interact first with one phase and then the other, back and forth repeatedly, but the fraction of each analyte overall in each phase will remain constant. This distribution ratio among the selected phases must differ for each analyte in order for them to separate. (Compounds will not separate chromatographically if they have the same distribution ratio on a particular system.)

Analytes with greater attraction to the stationary phase will still flow through the system because they spend part of their time moving in the mobile phase, but they will tend to lag behind those analytes that have a greater interaction with and, thus, spend more time in the mobile phase. Gradually, as they progress through the system, the analytes separate from each other (usually in order of their distribution ratio), and can be captured or at least detected in relatively pure form as they elute.

Separation is only the first part of chromatography. In Tswett's original experiment, he could see where the various compounds were by color. Most chemicals are colorless, however, so there must be a detector to notice when compounds elute.

While there are various types of detectors, their output is usually a chart with peaks corresponding to the various compounds (a chromatogram). The amount of time any given analyte stays on the column is its retention time and the area under its peak is proportional to its concentration, so the chemist can figure out how much of one analyte is present relative to the other compounds.

One thing chromatography alone cannot do is identify the molecular structure of the sample compounds; it can separate them from each other and detect them, but it does not tell what they are. Other kinds of analytical work would be needed for identification.

There are hundreds of stationary phase, mobile phase, and detector combinations in wide use throughout the chemical, medical, and biotechnology industries, but we can identify five major types.

Thin Layer Chromatography, or TLC, uses a flat plate coated with a stationary phase instead of a packed column. One edge of the plate is dipped into the mobile phase, which moves up through the solid material, carrying and separating the analytes. Colorless analytes can be sprayed with a chemical that colors them, so the chemist can see the result. TLC is usually preliminary to more in-depth analysis; it is, however, fast and requires very little equipment.

Gas Chromatographyor GC in which the mobile phase is an inert gas, usually helium, which simply carries along any molecules in the gaseous state. A GC system has an oven for heating the column, and so works best for samples that evaporate readily and do not decompose at high temperature. The stationary phase is a finely divided solid (often coated) packed into a coiled column. The analytes interact either directly with the solid surface (adsorption chromatography) or with the surface coating (partition chromatography). A popular variant on the packed column is the capillary column, a very long, coiled, open, narrow-bore tube with a coating on the inside walls. Capillary columns are particularly efficient at separating analytes with similar chemical structures.

Liquid Chromatography which has various abbreviations, the most common being HPLC, for high-performance liquid chromatography, the mobile phase is a liquid rather than a gas, often water or a simple organic compound, pumped through the stationary phase in a column under pressure. Better for temperature-sensitive compounds and those that do not evaporate easily, the analytes can undergo either adsorption or partition-type interactions as in gas chromatography. HPLC is used widely in the biotechnology industry for separating biological materials such as DNA segments.

Size Exclusion Chromatography or SEC is a little different from either GC or HPLC. Instead of analytes interacting directly with surfaces or coatings, the analytes slow down through the column by entrapment in stationary phase pores. The smallest particles are more likely to get trapped, so the largest particles separate and elute first (thus the name size exclusion) while the smaller ones lag behind. SEC is often used for the separation of very large molecules like proteins and the polymers used to make plastics.

Affinity Chromatography is used extensively in the biotechnology industry, affinity chromatography can purify and concentrate specific species, such as enzymes, proteins, or nucleic acids. The chemist applies the sample to the column, and the desired analyte sticks to the stationary phase. After washing impurities through, a different mobile phase detaches and elutes the analyte.

This lesson on chromatography should prepare you to confidently do the following: