View bio
Communalism is an ideology that advocates for a group's self-chosen separation from mainstream society. Learn the origins of this ideology in British India, the characteristics of the ideology, and study an example from India. Updated: 01/11/2022
Create an account

Communalism, like most ideologies, is a school of thought shared by a specific group of people. Specifically, communalism is the shared belief within a particular culture that promotes religious and secular isolation from another group. In other words, communalism is a form of segregation, only it's a segregation that the group being segregated actually chooses. In theory, there are many different reasons a group could become communalist, but typically these groups resort to isolating themselves based on religion.

A communalist group believes that their loyalty should lie within the group that they're a part of above any other loyalty, like nationalism (or loyalty to a country), because their ideals and beliefs don't match those of other groups. Many communalist groups even believe that they're a nation of separate confederacies rather than part of the country in which their members actually reside.

Often, the trouble with communalism is that each group denies the fact that they have more commonalities with other groups than they have differences. This can result in groups becoming hostile to one another, which has given communalism negative connotations. But it's important to remember that it's not always the groups themselves that originally instituted the ideology of communalism. In India, for example, much of the communalism (and resulting inter-group conflict) between the Muslims, Sikhs, Hindus and Christians was initially promoted by the British. Seems like a strange thing for a government to do, right? Let's explore why. 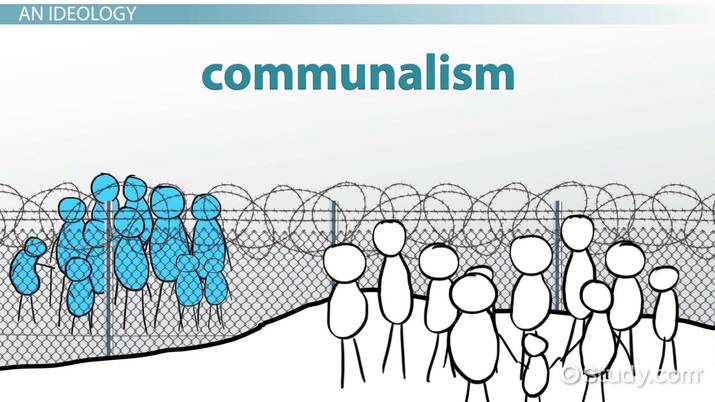 Coming up next: What Is Culture? - Material and Nonmaterial Culture

Communalism didn't really become an ideology until the British colonization of India, making it a fairly modern concept. It got started after the British realized that when they promoted nationalism, minority groups might realize they had shared interests, become more dominant, and resist British control of India, which could have led to another revolt like the Revolt of 1857. So instead of promoting nationalism, the British encouraged groups to essentially isolate themselves from and reject other religious groups, especially the Muslims. Muslims were specifically targeted by the British because the concept of nationalism was slower to spread among them than it was with the Hindus, so they already identified as more of an outside group. By encouraging communalism, the British were able to exaggerate this sense of separation in order to maintain control. Essentially, this control was achieved by promoting fear.

And it worked. During the 1880s, Muslims in India began to adopt communalism and isolate themselves in an effort to preserve their religious and secular beliefs. Keep in mind that just a few decades before, the Muslims and Hindus had fought side by side in the Revolt of 1857, suggesting that they had once believed they had some important things in common, like resisting colonial rule. This new rise in communalism was influenced mostly by the British and rich landlords so that they could maintain control of the colony. At the time, there were more Hindus than Muslims in India, and the British were able to exploit the fear Muslims felt because they were so outnumbered. The British suggested that Hindus would begin to suppress the economic interests of Muslims if they didn't defend themselves, creating fighting between the two groups that kept them from fighting back against the British again.

This is not an uncommon practice even today, and even outside of colonial governments. For example, the American political system, especially during political campaigns, is notorious for promoting fear in an effort to win votes. Candidates often exploit the differences between cultures, effectively dividing the population. This is especially dangerous because it can evolve into fundamentalism.

An important factor that popularized communalism in India was the lack of education and economic progress within the Muslim population. British influence in India emphasized science and more progressive ideas on industry and trade, while Muslim intellectuals remained traditional and non-progressive. The Muslim population also lacked focus on trade and industry, which made it harder for them to succeed economically. This made Muslims more susceptible to outside influences, and essentially forced their commitment to communalism.

Muslims also ended up being shut out of government, since education was essential for government positions and Hindus were more educated than Muslims. With fewer men in government and trade and industry, the Muslims continued to be exploited and controlled, which made them feel a greater need to protect themselves as a group, tightening the influence of communalism.

Communalism is a shared ideology within one group that promotes the isolation of that group from others. Essentially, it's a form of self-segregation that hinges on a group's belief that is has more differences than similarities with other groups of people.

In India, communalism was originally promoted by the British colonizers after the Revolt of 1857 in an effort to keep groups from joining together to fight British rule. Within India today, the concept of communalism is apparent in divisions between Hindus, Christians, Sikhs and Muslims. One of the most predominant communalist groups in India today is the Muslims; their relatively traditional way of thinking and lack of education, as well as lack of focus on trade and industry during the late 19th century, contributed to their dedication to communalism.

Imagine you are a British colonial official in India in 1858. You've just experienced the Revolt of 1857, which witnessed collaboration between India's Hindu and Muslim populations. You fear that Britain may lose control over its profitable colony of India. You meet with a group of Muslim leaders to express your concerns. They are expressing a strong nationalist stance and demand the British leave their country. Write them a 2-3 paragraph letter explaining why they should fear other groups, especially the Hindu. Your letter should stress that since Hindus outnumbered Muslims, they should fear Hindu power, especially when it comes to their economic and religious interests.

What is the definition of communalism?

Why did the British promote communalism in India among different groups such as the Hindu, Muslim, Sikhs and Christian populations?

What is Communalism?
Related Study Materials

Regionalism in Politics Types & Characteristics | What is Regionalism?