Creativity is subjective and involves responding to a task, adding value and usefulness to it. Discover the definition and exercises of creativity, the four-C model of creativity, and the debunking of common myths. Updated: 09/12/2021
Create an account

Two children are asked to draw a cat. Which one of the drawings is more creative?

Is it the one of the left, because that one more closely resembles a cat, while the one on the right is just a scribble? Or, is it the one on the right because it depicts a cat in an abstract and novel way, while the one on the left just includes some standard features of a cat (complete with the 'meow')? How does technique fit into determining creativity? In the drawing on the left, our young artist has left several of the lines unfinished, the whiskers are misaligned, and one ear is fully attached to the head. The drawing on the right, however, is composed of two continuous and relatively smooth lines.

In determining which drawing is more creative, there may also be an aesthetic value involved: Which drawing would you rather hang on your fridge? Personal considerations may include which drawing you might expect or want from your niece or nephew. Each of these considerations plays a role in determining whether something is creative. Creativity, then, is a novel response to a task that is useful, appropriate, and/or valuable. 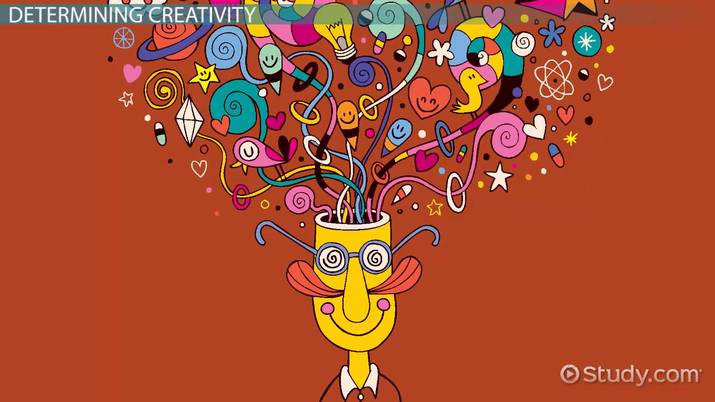 Coming up next: Baddeley's Model of Working Memory

A 3-year-old's unrecognizable imitation of a radio song, a song written by an unknown amateur guitarist, 'Bohemian Rhapsody' by Queen, and Ninth Symphony by Beethoven are all creative works. But, if you try to compare them, it might be hard to define them all as creative pieces. After all, what is an amateur guitarist's work when compared to a legendary composer's magnum opus? Of course, such a comparison can not only be really discouraging to the guitarist, but also really unfair. After all, Jimi Hendrix was once an unknown amateur, and even a really talented 3-year-old is not going to be producing Beethoven-caliber work at that age (Mozart didn't)!

These artists represent one of four levels of creativity through which producers pass (respectively), including:

Big-C creativity is a distinction that is usually awarded posthumously and refers to the creative works that have become legendary and had a world-wide, lasting impact. Usually, it is hard to tell in advance which works will have those effects, so identifying them as forms of Big-C creativity usually has to wait until history unfolds a bit.

There are many myths about creativity, such as creativity and mental illness go hand-in-hand. Decades of research by scientists, like Ruth Richards, R. Keith Sawyer, and Dean Keith Simonton, have shown that the majority of extremely creative people do not have any mental illness. Since psychopathology can interfere with how well someone can determine what is novel, useful, and appropriate (or the three bases of creativity), it makes sense that most highly creative people have no mental illness.

Another common myth is that not everyone can be creative. While most people are unlike to become a Beethoven, they all have mini-c and little-c creativity experiences almost every day! Many people also produce creative works professionally, making them Pro-C creative types. With all of us having so much potential, the question is not whether you will be creative, but how creative you will be!

Creativity is a novel response to a task that is useful, appropriate, and/or valuable. It can take the form of mini-c creativity, or personal insights; little-c creativity, the little insights shared between people; Pro-c creativity, or professional contributions; and Big-C creativity, which leads to world-changing contributions. Some people mistakenly believe that there is a relationship between creativity and mental illness and only a select few can be creative, however, most highly-creative people have no pathology, and almost anyone can be creative - even you!

The Relationship Between Intelligence & Creativity

What is Conflict? Sources & Types

Assessment in Education Importance & Purpose | What Is Assessment?

Research Purpose & Examples | What is Research?