According to culture conflict theory, crime can result from the clash of what different social groups consider acceptable behavior. Explore the definition and two types of culture conflict, and examine the examples. Updated: 01/03/2022
Create an account 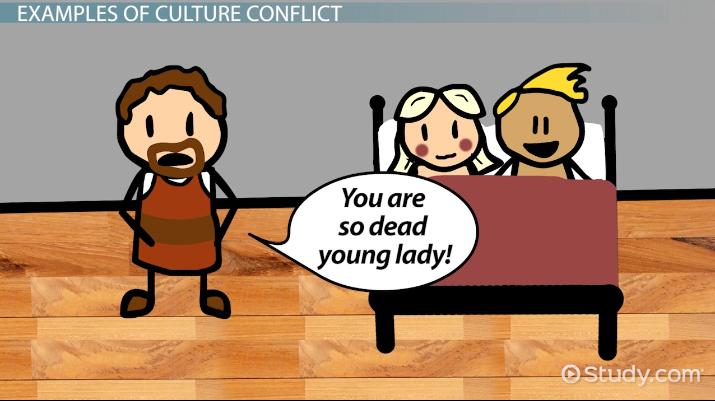 Coming up next: What is Forensic Science? - Definition, History & Types

In 1938, criminologist Thorsten Sellin wrote a book entitled Culture Conflict and Crime that clarified the culture conflict theory. According to Sellin, the root cause of crime is based upon various values and beliefs for what is acceptable behavior. The clash of these values and beliefs result in crime. Furthermore, since crime constitutes a violation of the law, the criminal act is simply a clash over what is the acceptable behavior.

Moreover, Sellin indicated that secondary conflict exists between the middle class and lower class. He believed that members of the middle class go to work every day in order to make a living through a legal manner. Meanwhile, he posited that others engage in illegal activities in order to make a living. These illegal activities have been established by laws created by middle and upper classes. According to Sellin, crime continues as these two classes clash.

Let's take an example of culture conflict. Imagine that Misha is the daughter of Bajka. The family immigrates to the United States. They are from a country where all women must remain virgins until they are married. Misha meets a man here in the United States, and they engage in premarital sex. Bajka learns of this encounter, and he kills his daughter in accordance with his native country's tradition. The tradition is one which follows that the killing must be done as an honor killing to respect the family. This is an example of primary conflict. As Bajka's fundamental cultural beliefs conflict with the laws and cultural beliefs in the United States, the conflict led to crime.

Let's look at another example. Imagine that James is a 6-year-old child from a family from another country that uses certain language that includes words that the United States considers to be 'foul' language. James uses the words in kindergarten and his teacher is appalled. James gets in trouble at school but does not understand why; his family uses the words at home, so James does not think he did anything wrong, nor does his family. This is not an example of crime, but it is an example of culture conflict theory.

Culture conflict occurs when crime arises due to a clash in values over what is considered acceptable behavior. There are two different types of cultural conflict: primary conflict and secondary conflict. Primary involves fundamental cultural beliefs, while secondary includes a conflict among the middle and lower classes.