Randy is an ITIL certified IT Manager and Technical Professional with more than 20 years' experience in Information Technology.

Data storage is the process of maintaining digital information to be retrieved upon request by users. Learn about the various data storage technologies from RAM to flash drives and magnetic tape to name a few examples. Updated: 12/28/2021
Create an account

Imagine for a moment that you lost your ability to remember anything - not what happened a minute ago, or yesterday, or five years ago. You wouldn't really be able to function, would you? Computers and other technologies work the same way. Without the ability to store and retrieve data, they aren't very useful. Whether writing an email, watching an online video, visiting a web site, or using technology in another way, there is a constant flow of digital information that needs to be stored in order for the technology to serve its purpose.

Data storage is a term for how information is kept in a digital format that may be retrieved at a later time. Computers, laptops, tablets, smartphones, and other devices all store data. The methods and technologies used vary greatly, but the basic concept is always the same: information is kept so that it can be accessed again later. 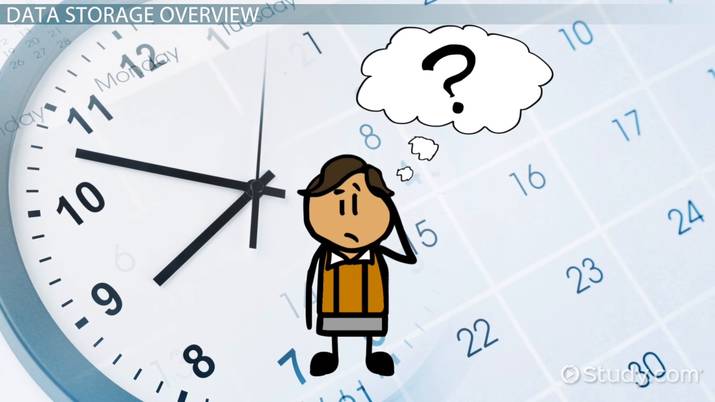 Let's go over some of them now:

Also known simply as memory or computer memory, RAM is what computers use to hold information temporarily so it can be easily accessed by the computer as you work. It's a lot like your own short-term memory - things move in and out quickly and aren't kept permanently.

Most computers and laptops use pieces of hardware to store data. They typically remain inside the device and store information, such as computer programs and files. In contrast to RAM, hard disk drives store data permanently so it can be retrieved at a later time, much like your own long-term memory.

Also known as thumb drives or USB sticks, flash drives are small, portable storage devices that can be plugged into the USB port on a device. Once data is stored on the flash drive, it remains there and can be removed and used in other devices. This is a common method for moving files between computers.

SD (secure digital) cards are small cards commonly used in digital cameras and smartphones to store files, such as digital photographs. Like flash drives, they can be easily removed and accessed on other devices.

Just as they can hold music or movies, CDs and DVDs can be used to store computer data. Like other storage methods, they are useful for sharing data between different devices or locations. CDs and DVDs are generally considered good options for long-term data storage.

Commonly referred to as backup tapes, many businesses rely on magnetic tape cartridges to back up data for long-term storage. Data is stored magnetically on long strips of tape wound inside a cartridge. They are similar in nature to the cassette tapes once used for music albums.

The M.2 is a form factor of the solid-state drive that replaces the previous mSATA standard. Though these drives are compact in size they can store just as much information as the Non-volatile Memory Express SSD. M.2 drives aren't connected to a motherboard via a cable, they're instead plugged directly into the motherboard using a dedicated M.2 connector slot.

To recap, data must be properly stored to be used again by technology devices. Data storage is a term for how information is kept in a digital format that may be retrieved at a later time. There are many different technologies available to store data. Data can be stored temporarily using technology such as RAM, or saved to devices such as hard disks, flash drives, SD cards, CDs and DVDs, and backup magnetic tape cartridges. CDs/DVDs and magnetic backup tapes are typically better options for long-term data storage.

What is a Batch File? - Examples & Basics

Creating a Framework for Competitive Analysis