Dharma in Hinduism refers to anything or anyone that upholds a positive order. Study the definition of dharma, learn how it's applied, explore the opposition to dharma, and discover an overview of the history of dharma. Updated: 12/29/2021
Create an account

We can't define an integral part of something without knowing what we are talking about. So here's a quick overview of Hinduism: 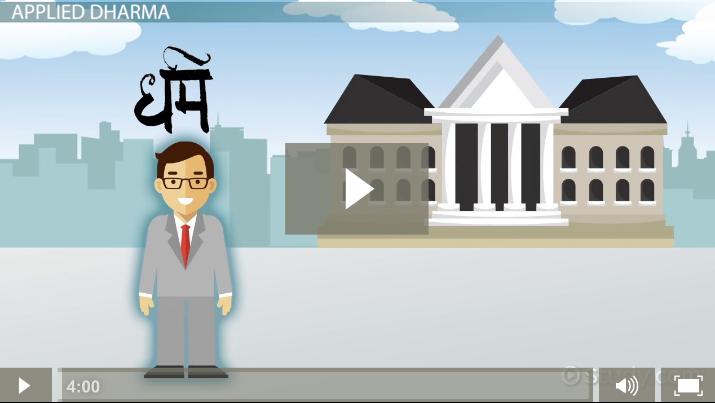 Coming up next: What Is Reincarnation in Hinduism? - Definition & Cycle

Dharma is a word without direct translation, but implies 'religion,' 'duty,' and 'righteousness.' It derives from a Sanskrit root word meaning 'to uphold or sustain'. The concept behind Dharma is anything that upholds or sustains a positive order. For example, an individual, a family, a community, a nation and the universe all help uphold order.

Dharma changes, depending on the social expectation and level a person is at. A child's dharma is different than their parents', who have different dharmas than, say, a nation leader. Each individual's expectations of how they are to be treated and expectations of what they should be doing are different. A child is expected to obey the parents and grow into a responsible adult. Parents are supposed to protect and look after their child. The head of a nation is to provide security and leadership to their citizens. If everyone follows their dharma, then prosperity is had. But if people fail to maintain, then the system begins to fall apart. For example, what if the leader acted like a child? What if the child refused to grow up? The entire system begins to fall apart.

A-dharma is the opposite of dharma; it is the failure of the individuals in the system to maintain the system. The children do not grow up, the police do not protect, the educators do not teach. If there is too much a-dharma then the entire system breaks down, and families, communities, nations, even societies break down.

A-dharma is like a wall of rising water. As it increases, the amount of people needed to fight back against it also increases. One bad child can be influenced or removed. A bad group of educators poisons everything.

Many of the great epics from India and in Hindu, called Varnashrama Dharma, have the system of dharma built into the story. In Ramayana, the hero exhibits all of the aspects of what dharma is, while the villain represents the idea of a-dharma. To a westerner, the idea is superficially similar to the concept of order vs. chaos, but this is overly simplistic. In Mahabharata, the dharma and a-dharma collide, with cosmic beings, heroes and villains. In the end of the story dharma triumphs, as this is the way the universe is.

Dharma lacks a directly translatable term, but is related to sustaining the order of one's duty based on one's position. A-dharma represents the opposite of this, i.e. the unraveling of order and the universe. Many epic stories discuss the role of dharma in the universe and how the world should work.

What Is Dharma in Hinduism? - Definition & Overview
Related Study Materials

The Origins of Hinduism: the Indus River Valley & the Harappa Culture

Judaism Holidays & Celebrations | What is the Most Important Jewish Holiday?

The Epic of Ramayana | Summary & Importance