Diversity broadly refers to many demographic labels, such as race, gender, and age, but also includes invisible attributes such as marital status, disability, or religion. Discover a deeper understanding of the definition of diversity, as well as the value of embracing diversity. Updated: 08/23/2021
Create an account

By itself, diversity can mean many things. The definition itself is a form of diversity. Meanings range from a state or fact of being diverse or different, to a variety of opinions. The important point in the formal meaning is that it indicates there is a point of difference. This means diversity broadly refers to many demographic variables. There are several other areas. However, well-known areas of diversity include race, religion, color, gender, nationality, sexual orientation, age, education and skills. 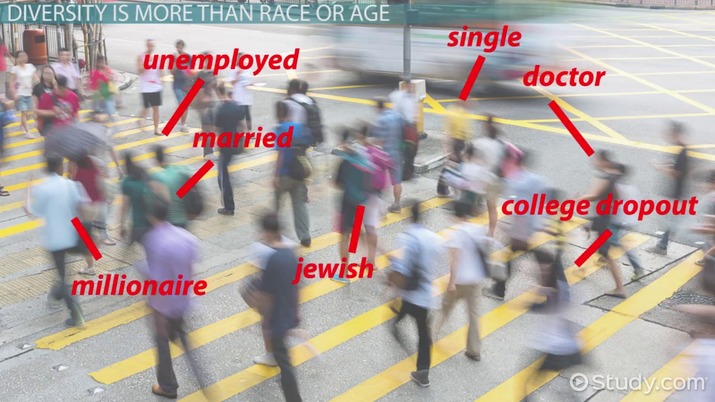 Coming up next: What is Community Psychology? - Definition & Types

Diversity is More than Race or Age

If you've ever visited the downtown area of a large metropolitan city or a major university, in addition to Caucasian students and workers, you've probably noticed African or Asian American students and workers as well. However, if you look beyond race, you may see an older woman or a young man with a physical disability. These are forms of visible diversity. Visible diversity is external and demonstrates things we cannot change, such as age, race, gender and other physical attributes.

However, there is also invisible diversity, which includes attributes that are not readily seen. We cannot see someone's work experience. With the exception of a wedding band, we do not know a person's marital status, educational achievements, income or religious beliefs. The only way to find out the status of an individual's invisible diversity is to ask them in a kind, but direct manner.

We should not assume an Indian with a bindi is a traditional Hindu, just as we should not assume a black person with dreadlocks is from Jamaica. In modern society, people are defined more by personal diversity and not just what is visibly seen. There are combinations of diversity attributes that are both visible and invisible, which means no individual's personal diversity is exactly like another person's diversity.

The Value of Diversity

When we recognize, value and embrace diversity, we are recognizing, valuing and embracing the uniqueness of each person we encounter. However, when respected, diversity helps to not only understand other people, but also gives a variety of ways that we can help and uplift each other.

Let's review. By itself, diversity can mean many things, but at its heart it indicates that there is a point of difference. This means diversity broadly refers to many demographic variables. Some are visible, such as race, color, age and gender. But many are invisible, meaning they're traits you can't tell just by looking at a person, like religion, nationality, sexual orientation, education and skills. When we recognize, value and embrace diversity, we are recognizing, valuing and embracing the uniqueness of each person we encounter.

Teaching Diversity in the Classroom

Giftedness in Children: Characteristics & Conceptions | What Does Gifted Mean?